The battle for Donbass is being fought village by village

"We have to go," mutters a volunteer, and the four words break Irina and Dima, niece and aunt, until then an example of stoicity. 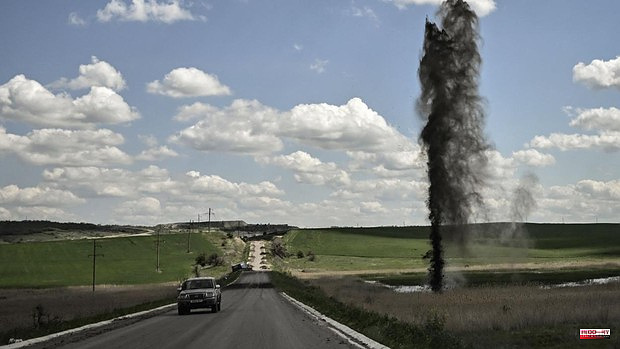 "We have to go," mutters a volunteer, and the four words break Irina and Dima, niece and aunt, until then an example of stoicity. The anguish transforms into a disjointed grimace of sadness and anger. They hug each other tightly and tears spread the bright makeup with which Irina intended to deceive her nine-year-old son, Vladimir, to give a semblance of normality to a farewell that may be the last. "I can't leave because my mother, very old, is blind," says Dima with a broken voice. "Or do you think they will help me get her out of Nikolskaya?" She adds as her niece steels herself, picks up her bags and heads with her son to one of the two evacuation buses arranged by the government. to get them out of the Donbass.

Together with them, 30 people were waiting yesterday in front of the Sloviansk city hall for an escape from the hell that Limán and its surroundings have become, fifteen kilometers to the northeast, since Russia reinforced its offensive to subdue the province of Donetsk, occupied to 70% by Moscow troops. Lugansk and Donetsk make up the long-awaited Donbass, a priority for Vladimir Putin, and focus the Kremlin's military effort to reap a victory after three months of war that have not even achieved the goal of subduing the Russophone zone. After withdrawing from kyiv, Chernigov and Kharkov, among other points, the Russian authorities seem to focus their efforts on completing control village by village and town by town with a disproportionate intensity of fire.

«The bombardments began a month ago, but for days they have been constant, day and night. There is no electricity, water or gas, there are no doctors or humanitarian aid. I don't know what happened to my house. My neighbor was killed in an attack and there was no signal to tell anyone to take his body away. We went to Nikolskaya but they also started bombing there », Irina explains with a broken voice as she arranges her belongings on the bus. Next to him Timofei does the same with his wife, his son Guennadi and little Oliana. “It is too dangerous to stay in our village. The Russians are getting very close and my daughter is developing breathing problems from sheer fear. Every time they bomb, she drowns."

The convoy coordinator explains that the number of people asking to leave has multiplied. "Until now, 15 residents left a day and today there are 33." The mayor, Vadim Liaj, raises his voice to be heard among the anti-aircraft sirens that reverberate non-stop. "The situation in the surrounding villages is rapidly deteriorating. To surround Sloviansk they must take Limán first, hence the offensive is concentrated there. At the moment it does not seem that it will fall, but if that happens we will have to remove the entire population of Sloviansk, ”admits Liaj, who has been asking the inhabitants to leave the Donbass for weeks. Of the 100,000 usual residents today there are 30,000. Unconfirmed information indicated at the last minute the occupation of some neighborhoods of Limán at Russian hands.

A dozen kilometers to the south, in Kramatorsk -today the capital of the Ukrainian Donetsk- his corregidor Oleksander Goncharenko details the offensive in the making. “The situation in Donbass is difficult but not critical. In Limán there have been no supplies for three weeks and there are 9,000 people left who can be evacuated, but very little by little. Only the Police and the Army are authorized to approach due to the danger of the situation and you never know when it's time to leave," he explains at City Hall, whose ground floor is full of groceries and pallets with water that is distributed to neighbors. . “In the last two weeks, the Russian positions hardly change: they can advance one or two kilometers a week, but we do not see the risk of being surrounded or invaded imminently. They are trying to advance from Popasna to the road between Bakhmut and Lisichansk [previously known as the road of life because it was the only escape route for the Ukrainians from the Donbass to isolate our soldiers in Lugansk. It is the most dangerous offensive line and a main objective, hence they have been bombarding Bajmut from the ground and from the air with heavy artillery, which is now within range of their heavy artillery. The risk is not so much that Bakhmut falls as that it is destroyed by Russian aircraft, as has happened to Izium. And that is also the risk that Limán runs.

The fall of Limán -or its destruction to the ground, following the Russian strategy in Syria or Chechnya- would leave Sloviansk within reach of Russian artillery, which keeps municipal officials awake. If Sloviansk falls, Kramatorsk will also be in gunnery range and will be next, thus completing Donestk's control. Meanwhile, in Lugansk, only Severodonetsk and Lisichansk resist together with the nearby villages - 90% of the region is in Russian hands - but it is unknown for how long. “The situation there is critical and is getting worse by the day. We don't know how much we can defend it. The Russians are doing the same thing there as in Mariupol or Rubizhne, where they have already destroyed 90% of the city. In Severodonestk it is estimated that half of the city has been bombed. The Bajmut-Lisichansk highway, which protects us, is south of Severodonetk and has been bombed night and day for days," explains the mayor of Kramatorsk. «The only thing that saves us is the Seversky Donest river, because it is very difficult for them to cross it. If the city falls, we'll have to blow up the bridges to stop their advance."

Goncharenko recalls that the "three or four" Russian attempts to cross the river with pontoon bridges have been successfully repelled by Ukraine at a high price in lives for Moscow, but he also admits - like Zelensky himself - that between half and a hundred Ukrainian soldiers lose their lives daily in Donbass. "The problem is that the Russians bring new weapons and fresh men," he notes. With the "difficult" situation, the mayor has asked the citizens of Kramatorsk to flee to safer areas, but "whoever wanted to leave has already done so. Of 160,000 inhabitants there must be about 50,000. The problem is that some are beginning to return, in the last two weeks 5,000 people. This, despite the fact that the last attack on Kramatorsk was on May 5”, an aerial bombardment that blew up 2,400 apartments, two schools, a shopping center and an ambulance center in a single day. 25 people were injured.

The deterioration of living conditions is advancing as fast as the offensive. Yesterday, the gas supply was interrupted in Donetsk for the first time since the start of the war. “Supply lines were damaged by the attacks in Luhansk and Kharkov and today they have been attacked around Severodonetsk. We have run out of gas reserves. It may or may not be a coincidence, but the fact is that unless our Army repels the Russians 20 or 30 kilometers to the north, we will not be able to repair the pipes.

The gas cut is another psychological slap in the face of a battered population. In the Sloviansk hospital, where the windows seem to vomit sandbags, Dr. Ihor Materinski receives in an office next to two cut-out camping chairs fitted to a wheel frame. "We need staff. There are only surgeons but we need gynaecologists, traumatologists, neurologists... Before, the hospital included a Neurology building, another for Traumatology and another for Gynecology and our team was made up of 700 professionals. Now only the polyclinic works and we are 80 in total, with five doctors working 24-hour shifts».

A dozen kilometers to the north, eight columns of black smoke litter the blue sky from Liman, reminding the persistent inhabitants of Sloviansk of the risk of staying. In the Slavni cafeteria, whose window is decorated with a giant heart of red petals, a camouflage pick-up truck with military backpacks and a Javelin anti-tank missile launcher, an icon of Western aid to Ukraine, is parked in its back box. Inside the premises, six tables are occupied by soldiers enjoying hot food; next to the dishes of chicken, sausages and baked potato, their regulation rifles contrast with the pop music that emerges from the speakers.

School number 14 in Sloviansk was attacked at the start of the war, two days after its students had been evacuated. The children's decoration -walls with cats, smiling ducks and butterflies- breaks with the crater left by the projectile that shattered its windows. Inside, stuffed animals, posters with basic phrases and book shelves remain intact, as if time had been frozen. «They attack us with quantity, not with quality. Nobody knows what the Russian strategy is, but it seems that it is about destroying everything and killing us all”, explains Eduard, a 24-year-old recruit from Kharkov with a face still marked by acne. "No one cares about this war. With the port of Odessa blocked, famine will spread throughout the planet. Please tell Europe to stop this situation because it will not only be suffered in Ukraine, but throughout the world.

Volodya and Masha left for safety in 2014, but their experience was so negative that now that they have a seven-year-old daughter, Katia, they have decided to stay in Sloviansk no matter what. "We don't have any money and we can't survive long abroad. In addition, the refugees soon get tired and start treating us badly », she explains as she watches the little girl run around with a scooter in front of the municipal library. "Here we have our house and in the basement we have accumulated everything we need to survive a season," she adds.

"I have no doubt that the Russians will get here," says her husband Volodia, 67 years old and, like his entire generation, a former soldier of the Soviet Union. "War is a business. From here Putin makes a 300% profit, and the rest of the world too, because he revitalizes the arms market. And we, the poor, will be even poorer because there is no work », he muses indignantly. “Ukrainians do not want humanitarian aid, we want to earn money from our work. And you see, we can't do it. Our destiny is in the hands of one man, Vladimir Putin, the rest of us are cannon fodder for him », she concludes.

1 Putin Pulse Alphabet to the Free World 2 "What has happened in Pakistan has nothing to... 3 The Prosecutor's Office does not appeal the acquittal... 4 Labor accuses low-paying companies of driving away... 5 First wounded of the Ukraine war in Madrid: "They... 6 Champions, Europeans, relegated: the verdict of the... 7 Energy: record number of disputes with the Mediator... 8 Visa pour l'image intends to show Ukraine but... 9 Literature in the spotlight at the festival “Oh... 10 Roland-Garros: fog horn, songs and football stadium... 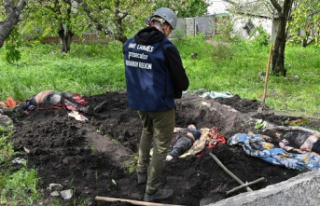