The Justice of Andorra has ordered that the former President of the Government Mariano Rajoy, two former ministers and two former senior officials of his Government be notified of the complaint filed by two associations in relation to the management of the Spanish Executive in the operation that led to the dissolution of the Private Bank of Andorra (BPA). 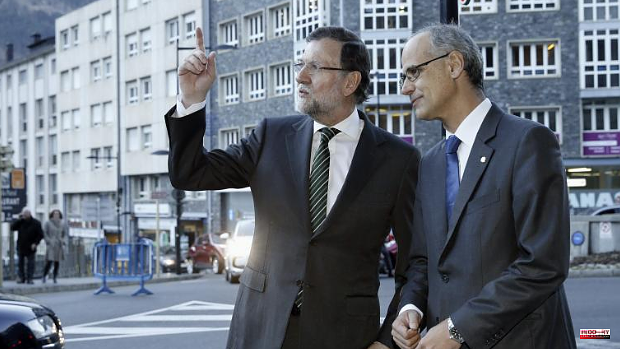 The Justice of Andorra has ordered that the former President of the Government Mariano Rajoy, two former ministers and two former senior officials of his Government be notified of the complaint filed by two associations in relation to the management of the Spanish Executive in the operation that led to the dissolution of the Private Bank of Andorra (BPA). Rajoy has 15 days to legally appear before the Andorran investigating judge.

As reported this Monday, Drets, one of the two associations that denounced Rajoy for the business operation, which would fall under what is known as Operation Catalonia, the specialized investigating judge number 2 of Andorra, Stéphanie Garcia Garcia has already sent to the Spanish authorities the corresponding international rogatory commissions to notify the defendants.

In addition to Rajoy, the former ministers Cristóbal Montoro and Jorge Fernández Díaz, the former director of the National Police Ignacio Cosisó and the former Secretary of State for Security Francisco Martínez are also being investigated. For its part, in addition to Drets, a Catalan pro-independence entity, the association Institut de Drets Humans d'Andorra (IDHA) and Higini Cierco Noguer, president of BPA, personally attended.

The investigation began in 2016 after Cierco declared before the judge, in the BPA case, that both he and his CEO, Joan Pau Miquel, were pressured and extorted in Madrid by the Spanish Police inspector at the Embassy of Andorra Celestino Barroso and by Commissioner Marcelino Martín Blas with the aim of obtaining bank information on Artur Mas, Jordi Pujol, his family and Oriol Junqueras in the Pyrenean country.

The pressures focused on the fact that if Cierco and its CEO did not collaborate with the Spanish Police, BPA and its subsidiary Banco Madrid would be closed. A situation that ended in March 2015. After this, a complaint was filed against the two agents and, later, it was extended to their superiors Eugenio Pino and Bonifacio Díez Sevillano. These complaints were admitted but inspector Barroso did not testify since he obtained diplomatic protection.

Now, after a new extension of the demands, the Andorran Justice wants Rajoy, two former ministers of his and two senior officials of his Government to testify. The former president and the former ministers are charged with a crime of falsifying documents for sending allegedly false information to the American Fincen (Finance Crime Enforcement Network) so that it would issue a 'notice' against BPA indicating that this bank carried out money laundering of capitals.

Rajoy and Montoro, in addition, are charged with a crime against the constitutional bodies of Andorra for, according to Drets and Cierco, having intimated the head of the Government of Andorra and several ministers with whom they met in January 2015 so that they could investigate and liquidate BPA. Fernández Díaz, Cosidó and Martínez are being investigated for the crimes of coercion, threats, extortion and blackmail, as superiors of the inspectors who carried out the alleged pressures.