More than 30,000 hectares reduced to ashes in just over three days. 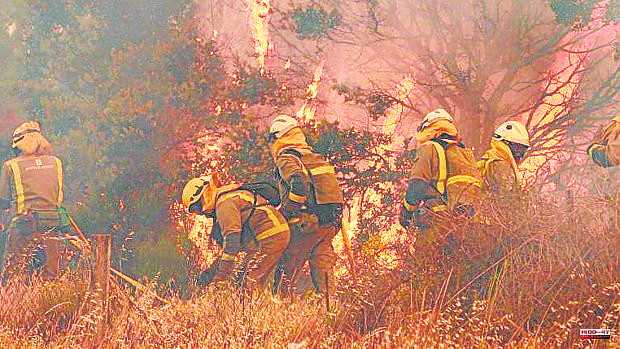 More than 30,000 hectares reduced to ashes in just over three days. The fire that has burned the Sierra de la Culebra in Zamora has already written its name in the book of records for the largest fires in Spain and is the worst recorded in the history of Castilla y León. A voracious spread of the flames within a perimeter that exceeds 120 kilometers -more than going from Madrid to Segovia-. The timer practically stopped almost suddenly, when the elements went from playing against each other to allowing the operative's work to pay off after a race against the clock in which the fire was faster than the firefighting troops, whose device deployed by the Junta de Castilla y León -responsible in the matter- has received harsh criticism.

But why these figures in such a short time?

The clouds collided hard with each other. With lightning, but without downloading rain. They fell to the ground and several managed to catch fire. Combustion began in 14 points, more in others where it was gaining heat until the flames went outside, they are the latent rays that hit the target, but the flame takes time to come to light. Between one and the other, the origin of a "barbarity" of fire.

It was just after 7:00 p.m., with a little more daylight ahead. A factor against fighting any fire. When natural light goes out, the aerial means have to withdraw to their bases until the next dawn. And in this case, even during the day, because of the dense smoke, they couldn't even act. Several lights began to smoke. It was in the dark that the fire took the most advantage to advance, with the flames 'engulfing' thousands of hectares. On the 16th he said goodbye with 800 burns and on the 17th he saw the light with some 12,000 calcinations.

"The wind has been the worst enemy we have had," recognize those who were face to face in front of the flames. Feeling of impotence when seeing that the work of hours turned into scorched earth when the wind gained more strength and changed direction. A constant for days, with gusts of up to 70 kilometers per hour. There were 12 hours in a row in which it advanced to 1,200 hectares reduced to ashes every 60 minutes. It was to curb his strength and change the landscape. From nightfall on Saturday with a grim forecast and the flames rising above 20 meters to dawn on Sunday with smoke, but no flame. The jobs paid off.

If the wind propelled the fire, the temperatures got even hotter. They touched 40 degrees. The mercury first ganged up on it and then allied itself with the device to stop the flames from advancing.

A dehydrated surface, which also suffers the effects of drought. Only April has been generous in water. And the vegetation in need of liquid became the perfect fuel to quench the cravings of the raging fire. Even green meadows faded to black in the blink of an eye.

The open land between the wooded masses to try to stop the advance of the fire has been of no use in this case. The flames jumped them without problem propelled by the wind in favor, surpassing even up to six lines of defense in one jump. Although critical voices have also emerged about its maintenance. Among the reproaches, "not" allow the cleaning of rivers or canals that acted as natural firebreaks. They did not even serve the highways, because it jumped tracks and even the 500 meters from shore to shore of the Agavanzal reservoir.

The steep terrain of the Sierra de la Culebra, with the fire burning in its peaks, made the extinction work even more difficult due to the difficulties in gaining access by land.

Victims of the flames, but also food, pineapples were key to expansion and extension. When heated, they jump and carry the fire to light at another point. The same as the ashes, which flew hundreds of meters and lit up again.

Without yet having entered into force the period of high risk of fires that officially starts on July 1, the greatest criticism has focused on the troops that the Board had available at that time, with the operation at "25 percent" . However, the Ministry of the Environment defends the action, since the operation "could not act with results" until the night of Saturday to Sunday, when the extreme wind ceased and temperatures dropped. The fire was "out of extinguishing capacity" for more than half of the hundred hours of uncontrolled progress.

The proximity of the flames and the dense smoke forced villages to be evacuated. Some thirty localities and nearly 3,000 people were evicted those days, until on Sunday they were all able to return to their homes, without knowing what they were going to find. Ashes and more ashes around him. "Saving" the towns was the task on which the operation focused, seeing that controlling the fire was an impossible mission. There has been damage to buildings, but the fire did not enter the municipalities and there were no victims.

1 More than 11,200 kilograms of stolen oranges with... 2 Arrested for assaulting, intimidating with a knife... 3 They find the body with signs of violence of a man... 4 Ximo Puig faces the post-Mónica Oltra era with a... 5 Jácome is saved from judicial burning by filing the... 6 Face to face with a new volcano with limited capacity 7 The Generalitat sees "a point of irresponsibility"... 8 Russia bombs downtown kyiv as world leaders meet in... 9 At least 20 dead in a South African nightclub in unknown... 10 More than a hundred bikers tour the province of Salamanca... 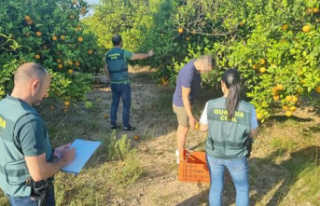