Videotron again won its case Tuesday in Federal Court against Telus, which questioned the purchase of 3500 MHz spectrum licenses by Quebecor's telecommunications company in Western Canada.

Videotron again won its case Tuesday in Federal Court against Telus, which questioned the purchase of 3500 MHz spectrum licenses by Quebecor's telecommunications company in Western Canada.

In the summer of 2021, Videotron, through its subsidiary Fibrenoire, participated in auctions which enabled it to obtain 128 3500 MHz spectrum licenses – an essential frequency for the development of a 5G network – in British Columbia. , Alberta and Manitoba.

In the process, Telus had first requested an interlocutory injunction – rejected last October –, before requesting a judicial review which was also rejected in a judgment rendered on Tuesday.

In the eyes of the telecommunications giant, Videotron should not have been authorized by Innovation, Science and Economic Development Canada to participate in the auction, in particular on the grounds that it does not have physical facilities in Western Canada. She therefore called for a resumption of the summer 2021 auction.

However, Judge Alan S. Diner, following his analysis of the case, "concluded that the process for assessing eligibility for reserved spectrum and the Minister's decision are fair and reasonable", is it indicated in his judgment.

Videotron's participation in the auction had been favored in particular by provisions of the Telecommunications Act which allow companies that are not part of the national mobile service providers – Rogers, Bell and Telus – to bid on part of the frequency spectrum that are reserved for them. By doing so, the federal government hopes to encourage competition in communications.

Quebecor and Videotron have already indicated in the past that they want to develop a mobile phone network in Western Canada.

Last fall, following the first setback for Telus, the two companies deplored the "relentlessness" of the telecommunications giant which, according to them, "seeks at all costs to curb the implementation of the government's policy which promotes the arrival of a 4th player in the Canadian wireless market to create healthy competition that does not exist to date.

1 ERC gives another notice to the Government and forces... 2 The PP demands explanations for Sánchez's last... 3 The PP stumbles in the territorial debate, its cornerstone,... 4 A dean of the Canadian army dies 5 Half a million euros to arm 300 elite agents of the... 6 Sangenjo, "delighted" with the royal visit 7 Outage of television service at Bell in Quebec and... 8 The big left-handed elephant in the room 9 What a comeback from the Rocket! 10 The Lightning continue their momentum 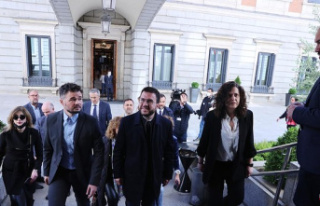 ERC gives another notice to the Government and forces...