In the middle of a sandstorm in the Mauritanian desert and 17 kilometers from the capital Nouakchott, Her Majesty the Queen has seen first-hand the operation of one of the agricultural projects of the Spanish Cooperation in this Sahelian country: an agricultural innovation center which now bears his name. 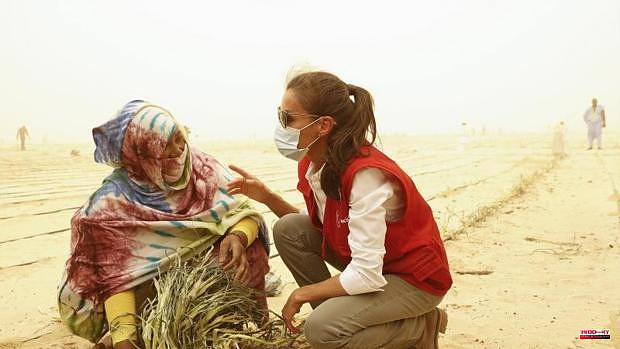 In the middle of a sandstorm in the Mauritanian desert and 17 kilometers from the capital Nouakchott, Her Majesty the Queen has seen first-hand the operation of one of the agricultural projects of the Spanish Cooperation in this Sahelian country: an agricultural innovation center which now bears his name.

Dressed in her characteristic red Cooperation vest, goggles and mask to protect herself from the sand, Doña Letizia toured part of this project co-financed by the EU with two million euros. This project is within the food security line of action at a key moment to stop famine in African countries.

The Huertos project, as it is also known, must become a 10-hectare green space in which 130 farming families harvest cucumbers, lettuce, tomatoes, spring onions... To do this, there is drip irrigation and greenhouses and buildings have been built for the livestock farm.

After planting from the seedbed, families are now striving to nurture those first shoots so that they can harvest in two months, once the rainy season starts in July.

This project seeks to achieve self-sufficiency in the area in terms of food but also to generate surpluses with which it can be traded. Mauritania, the size of two Spains and with a population of 4.6 million, gets most of its vegetables and fruit from its more fertile southern region and from imports from Morocco.

Queen Letizia was accompanied by the governor of the Nouakchott region, Fatimentou Mint, the Secretary of State for International Cooperation, Pilar Cancela, the Spanish ambassador Miriam Álvarez De la Rosa, and the European ambassador to this country, Gwilm Jones.

The Queen, wearing her red 'cooperator' jacket, today concludes her 48-hour trip to the Spanish Cooperation projects in Mauritania. With the visit to a new hospital emergency center, this seventh cooperation trip concluded.

During the day, the Secretary of State for Cooperation made a balance of the visit: «The Queen is our distinguished aid worker. She believes in Spanish cooperation”, said Cancela who pointed out that “Mauritania is a geostrategic and geopolitically fundamental country”.

In this country, Spain invested 8.4 million in the last year in cooperation projects with three main lines of action: gender equality, health and governance. Food safety is another transversal action.

1 A woman arrested for trafficking cocaine at retail... 2 Germans buy 7.7% less food to support the rise in... 3 All Iron Ventures creates its first fund of funds... 4 The Supreme Court forces Paradores to pay salary supplements... 5 El Real Madrid ficha a Rudiger ill 2026 6 Shein: this is the new store that has opened in Madrid 7 Ultra, the world's largest electronic festival,... 8 The TC also annuls the government reform that left... 9 Mañueco censures that "there are people who... 10 The Siro Company Committee will meet on Wednesday... 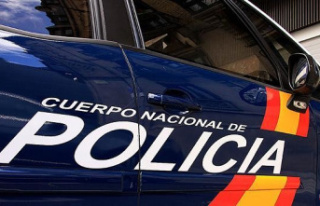 A woman arrested for trafficking cocaine at retail...