Very unsatisfactory for the investiture partners of Pedro Sánchez, the president's appearance on the new relationship between Spain and Morocco at the expense of Western Sahara and his closed defense of NATO policies. 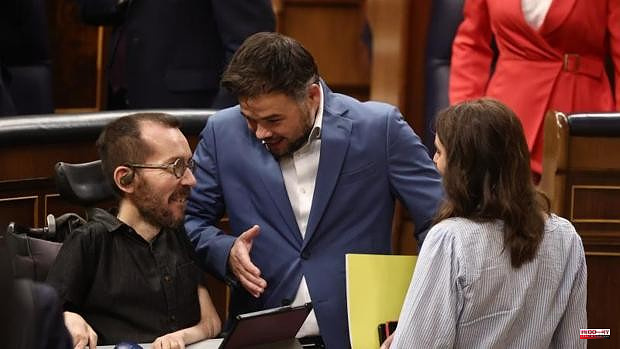 Very unsatisfactory for the investiture partners of Pedro Sánchez, the president's appearance on the new relationship between Spain and Morocco at the expense of Western Sahara and his closed defense of NATO policies. Sánchez has made a claim for the Atlantic Alliance, whose next summit is scheduled in Madrid for the end of June, and has received reproaches from all of his parliamentary allies. They consider that it is a praise to a "warmonger" organization under the yoke of the United States and they demand "more social spending" and less military investment. They also regret the president's unilateral turn towards the Saharawi people.

The parliamentary spokesman for United We Can, Pablo Echenique, has expressed on behalf of his group the deep rejection of the increase in defense spending that the president has explained these weeks.

The deputies of Podemos have not applauded when the president has spoken of the Atlántica organization, following his critical line. Sánchez has in fact expressed from the Speakers' Tribune that Podemos "is wrong" in radically opposing NATO, which has generated a stir among the purple leaders.

The Minister of Social Rights and leader of the party, Ione Belarra, and the head of Equality, Irene Montero, reacted with gestures of disagreement to the president's words and quickly began to write on the phone. Montero has also had an exchange of views with the Minister of Health, Carolina Darias, at this time, as a complaint against what Sánchez said. The second vice president, Yolanda Díaz, is also against increasing military spending, however, she wants to distance herself from the purple party's total opposition to NATO. She, for example, has left open the possibility of attending the summit, while the Podemos ministers have already said they will not be.

Echenique has insisted on increasing spending on health and education and not on defense because they consider it unnecessary. In addition, the spokesman for United We Can has requested that the new decree of anti-crisis measures be extended until the end of the year, contemplate 15 percent of non-contributory pensions and approve within it an aid of 10 euros for transport.

The ERC spokesman, Gabriel Rufián, has elaborated on the discrepancies of the coalition government. "It is not new that the Spanish left fights and has discrepancies about NATO, that the PSOE is militaristic and United We Can, antimilitarist." What he has criticized, and could also be interpreted as a stick against Vice President Yolanda Díaz for the position he is defending, is that "being pro-NATO means being a statesman and being responsible", while being against is being "irresponsible" .

Rufián has also shown his rejection of the increase in military spending: "There is an alternative to tanks and weapons, to stop the neoliberal oligarchs (...) more soldiers are fewer nurses, more tanks are fewer hospitals."

Bildu's foreign policy spokesman, Jon Iñarritu, has accused the president of "selling" the Saharawi people to improve his relationship with Morocco, not at all satisfied after having listened to Sánchez's explanations about why he agreed to greater control of Rabat on the former Spanish colony. "It is illegal from the international point of view," Iñarritu reproached him; making a full defense of the right to self-determination of Western Sahara.

Also Aitor Esteban, spokesman in the PNV Congress, has criticized the president for "abandoning the Saharawis to their fate" and "abandoning the neutrality" historically defended by Spain. “Here there are some net losers, who are the Saharawis, they are pagans, the currency of exchange”, Esteban lamented.

Ferran Bel (PDECat) has criticized the "unilateral" turn and has asked the president for more explanations about the repercussions that this will have on the relationship with Algeria. Bel, yes, has accepted greater cooperation between NATO and Europe to try to end the war in Ukraine. Albert Botran (CUP) considers, for his part, that increasing defense spending will only serve to "benefit the arms industry" and, therefore, fuel the war.

1 The Diputación awards more than 900 athletes from... 2 They locate alive the bear that fell into the Palentina... 3 The future of philosophy in the classroom, under examination... 4 Two young men are arrested for sexually abusing eight... 5 The ex-consul of Finland in Barcelona arrested for... 6 At least 25 people injured after the collapse of a... 7 Bolsonaro doubts that Biden won the elections before... 8 Artist Paula Rego dies at 87 9 Rufián triggers the tension between the independence... 10 This is the Leopard, the German tank that Spain wants... 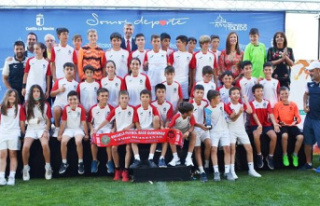 The Diputación awards more than 900 athletes from...