Sánchez's 'beautiful government' to cover up the radicalism of its partners

In four years, the duration of an ordinary legislature, Pedro Sánchez has been survived by only seven ministers. 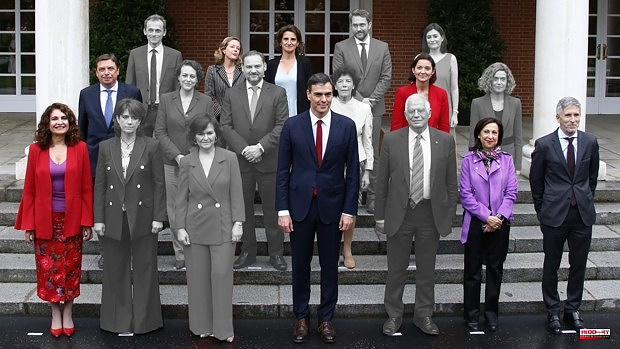 In four years, the duration of an ordinary legislature, Pedro Sánchez has been survived by only seven ministers. The holders of Defense, Margarita Robles; Interior, Fernando Grande-Marlaska; Treasury, Maria Jesus Montero; Economy, Nadia Calviño; Ecological Transition, Teresa Ribera; Agriculture, Luis Planas; and Trade and Tourism, Reyes Maroto. The seven were on the steps of La Moncloa on June 9, 2018, eight days after the motion of censure against Mariano Rajoy, which is now four years old, and they were still there on December 28, the date of the last family photo of the cabinet, after the incorporation of the last minister to arrive, Joan Subirats, who relieved Manuel Castells in the Ministry of Universities (one of those now held by United We Can).

That group of resilient ministers began with a monochrome PSOE Executive, which then had just 85 deputies, and has come alive politically with another coalition with United We Can. Along the way, several have seen their functions in the Executive increased or decreased. Montero combined between January 2020 and July 2021 the Government spokesperson with his position as head of the Tax Agency.

Calviño began as third vice president, the rank that Sánchez himself promised to give her in the November 2019 electoral campaign, still in a period of great confrontation with Podemos, and has ended as first vice president, after the departure of the Government a year ago of Carmen Calvo, who until then was also one of the ministers who had been with Sánchez from the beginning.

The same thing happened to other 'old shirts', such as José Luis Ábalos, at the head of Transport since June 9, 2018; to Isabel Celáa, the first head of Education and the first government spokesperson before the coalition with United We Can and one of the shining stars of that 'beautiful government' -as defined by the late ABC columnist, Juan Pablo Colmenarejo- the astronaut Pedro Duque, who after three years ceded to Diana Morant Ciencia. Teresa Ribera, one of the economic pillars of the Government, was also promoted, who a year ago reached the rank of third vice president, after having had that of fourth after the coalition was formed.

On a more discreet level, another PSOE veteran, Luis Planas, has followed. His ministry has gained prominence at various times for the demands of the field, heavily affected by the fuel price crisis, exacerbated exponentially since the Russian invasion of Ukraine. And Fernando Grande-Marlaska and Margarita Robles have always been at the forefront of the Sánchez governments, due to the nature of their portfolios (those traditionally considered 'of the State') and due to their own profile.

The first, marked in 2018 by his career as a combative judge against ETA, first as an investigating magistrate in Bilbao, and then in the National Court, had been linked to the PP, a party thanks to which he became a member of the General Council of Power Judiciary (CGPJ). Robles, on the other hand, was linked to the PSOE since she was Secretary of State for the Interior with Felipe González. They were two of the three jurists with recognized careers from that 'beautiful government' with which Sánchez tried to cover up the reality of the radical partners with whom he came out ahead, the original sin of his Presidency that accompanies him to the present day, where formations such as ERC or Bildu are the fuel that moves the legislature, after having facilitated not only the investiture but, twice, that the Budgets go ahead, in addition to countless legal reforms.

The third jurist who appeared in that inaugural photo of June 2018 was Dolores Delgado, who held the Justice portfolio for less than two years after moving, without interruption, to the State Attorney General's Office, where she continues. A revolving door through which the professional associations shouted to the sky and that was never to the liking of Podemos. “Who does the Prosecutor’s Office depend on?” Sánchez had come to ask himself rhetorically during an interview on Radio Nacional in the 2019 campaign. A question that became clearer after that appointment.

In that first Executive there was also another appointment aimed at disguising the long shadow of the negative coalition that gave birth to it, which included the separatist formations that just months before had staged the 2017 coup against the State, whose leaders he would end up pardoning himself. Sanchez. It was about the election for Foreign Affairs of the veteran socialist Josep Borrell, today High Representative of the European Commission.

It is true that in the internal battle of the PSOE, in which Sánchez was ousted in 2016 and then resurrected by winning the primaries in 2017 against Susana Díaz, Borrell was always, as actively as resoundingly, on Sánchez's side. But at the same time, the Lleida native has always been a scourge of the independentists, with whom he soon collided as minister. This was made clear in a tense parliamentary plenary session that the ERC deputies angrily abandoned after Borrell blurted out to Gabriel Rufián that he turned his interventions in the Chamber into, he said, "a mixture of sawdust and manure."

The figure of Borrell, or those of Calviño and Ribera, also launched an image without stridency towards Brussels, then very concerned about the populist government in Italy, a coalition between the Five Star Movement and La Liga, of which Matteo Salvini was its controversial vice president. . That transalpine cabinet would end, not in vain, replaced by the current concentration government of Mario Draghi, former governor of the European Central Bank.

Sánchez knew then that his allies were an Achilles' heel that could weigh down his action in community institutions and, in general, before the international community. The same problem that is found this 2022 before the open boycott of his partner, Podemos, to the NATO summit that will be held at the end of the month in Madrid.

The 'beautiful government', moreover, was making itself known through a measured trickle of announcements, one for each minister, which began to make it clear that a leader very concerned about political marketing had arrived at La Moncloa, the task of the which was commissioned, until his defenestration a year ago, by the illustrious Iván Redondo. But already the last of those announcements came out frog. The television presenter Maxim Huerta barely lasted a week as Minister of Culture, long enough for a media revelation about his fiscal behavior to make him the first dismissed by Sánchez. The second, in September, was Carmen Montón, forced to resign from Health when it became known that she plagiarized her thesis.

The 'beautiful government' began to show its seams. But in addition Sánchez, who in the opposition had branded the then Catalan president, Quim Torra, as "the Spanish Le Pen", embarked on the first of his approaches to a Generalitat in full rebellion, which threatened to repeat what happened in 2017. The Government came to recognize the figure of a "rapporteur", as if it were an international conflict and two sovereign states. But not even those transfers, against which PP, Ciudadanos and Vox mobilized thousands of Spaniards in the street, allowed Sánchez to approve his first Budgets. The public accounts project, agreed with Podemos, could not go ahead due to the rejection of the pro-independence groups. And Pedro Sánchez called elections for April 2019, but that is another story.

1 Republican states in the United States make it easier... 2 Agustín Zulueta: "We contribute about three... 3 Why is the Roland Garros trophy called the 'Musketeers... 4 Abascal warns PP "Either you govern together... 5 They judge a promoter who deceived the public throughout... 6 The Minister of Health: «The Ministry has the key... 7 Nick Cave, black magic at Primavera Sound 8 Due to potential listeria, cheeses from 9 states have... 9 Biden's beach home in Delaware was the subject... 10 Two arrested in Toledo after leading a brawl on the... 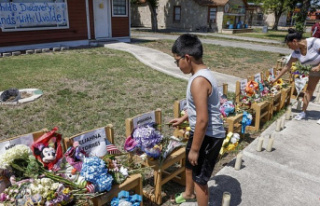 Republican states in the United States make it easier...