Sestao will seek promotion to 1st RFEF in the play-off

There was no party in Las Llanas.

There was no party in Las Llanas. The arduous combination of a victory for Sestao against Tropezón and a defeat for Osasuna Promesas did not come about because the rojillo subsidiary resolved its ballot without difficulty against Izarra. Despite the three points obtained, the team from the Left Bank finished second in Group II, condemning themselves to dispute the always tough play-off in search of a place in the 1st RFEF.

Sestao did his homework quickly, after five minutes. A few seconds after Ibrahima Dienj pardoned the 1-0, Unai Buján, one of the five novelties that Aitor Calle introduced with respect to the last match, scored the first goal against Las Llanas after taking advantage of a precise pass from Gorka Garai. The problem? That Osasuna Promises had already gone ahead in Tajonar after two minutes against Izarra, who had already ensured permanence and nothing was at stake. The black-and-white fans consulted their mobiles trusting in a defeat for the red team, but they found that it was a practically impossible mission.

River was able to increase the income on several occasions, but the lack of defensive intensity, with the head in Navarra, led to the draw of the Cantabrian team at the stroke of halftime. Free of a mark and with a superb volley, Álex Díaz put the ball out of Rabanillo's reach, who grazed it without being able to deflect it.

The empanada of the locals was such that the Tropezón scored the 1-2 four minutes after the restart, when Javi Delgado finished off a lateral center in the small area. Disbelief reigned in Las Llanas, who saw how Dani Salas missed the third for Torrelavega's men on the next play.

Calle gave a fresh air to his forward substituting Dienj and Garai to give entrance to the Iñigos, Baqué and López. The changes took effect and resulted in the comeback. After a good triangulation, captain Asier Goti put in an excellent remote-controlled cross towards Iñigo Baqué, who sent the ball into the cage with a header. Osasuna continued to win, but the crowd wanted a victory to bid their team farewell after an outstanding season. Picón's expulsion for a double yellow card gave wings to Sestao, who with one more player cornered the Cantabrians. The 3-2 came in the 89th minute after a rude mistake by Juan González. After making several worthwhile interventions, the visiting goalkeeper crashed the ball into the back of Iñigo López, who only had to push it into the net. There was time for more. With Tropezón turned to the attack despite their already consummated relegation to 3rd RFEF, Markel Bravo made the final 4-2 after a filtered pass from Baqué.

El Sestao will meet tomorrow -the draw is at 11.30 at the Ciudad Deportiva de Las Rozas- its rival in the semifinals (Palencia Cristo, Lleida, Coria or Hércules, fifth classified in their groups), which will be played on Saturday 21 (19.30 or 9:30 p.m.) or Sunday 22 (7:30 p.m.). In case of victory, it will be measured on Saturday 28 or Sunday 29 (7:30 p.m.) for a gap in the bronze category of Spanish football to the winner of another semifinal between third and fourth. All the qualifiers will be played in a single match in the province of Alicante. In the event of a tie, extra time will be played, but no penalty shootout, with the victory awarded to the team with the highest position in the standings. That is, Sestao is worth not losing any of the two games for having been second in the League.

1 The discount sentences the dream of the rise of Portugalete 2 Augusto Fernández debuts in Moto2 this season 3 Strong fall in the Giro de Pello Bilbao, which is... 4 Masiá presents his candidacy for the Moto3 title 5 The Metropolitano celebrates the Champions League... 6 Barça seeks to close the second place in Getafe 7 Cádiz is playing for survival against the champion's... 8 Toledo turns upside down with the pilgrimage of the... 9 Unai Laso reacts in time and unseats the champion... 10 Salah and Van Dijk, injured in the FA Cup final 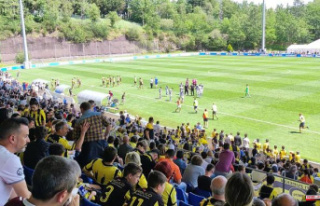 The discount sentences the dream of the rise of Portugalete