The vice president of General Affairs, Employment, Sports and Tourism Promotion of the Toledo Provincial Council, Fernando Muñoz, highlighted this Friday the success of the mayor of Seseña, Silvia Fernández, in betting on recovering a natural area of ​​great value such as the area 'Soto de Jembleque' and has expressed his satisfaction with the contribution made to this project by the Professional Retraining and Retraining program (Recual) promoted by the Toledo Provincial Council, in collaboration with the Community Board. 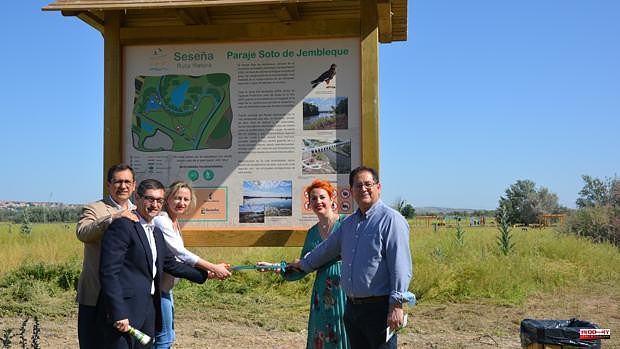 The vice president of General Affairs, Employment, Sports and Tourism Promotion of the Toledo Provincial Council, Fernando Muñoz, highlighted this Friday the success of the mayor of Seseña, Silvia Fernández, in betting on recovering a natural area of ​​great value such as the area 'Soto de Jembleque' and has expressed his satisfaction with the contribution made to this project by the Professional Retraining and Retraining program (Recual) promoted by the Toledo Provincial Council, in collaboration with the Community Board.

Muñoz has highlighted how the institutional collaboration in the province of Toledo is giving magnificent results and «an example of this is the intervention that has been carried out in this natural area of ​​Seseña thanks to the intervention of the staff of the municipal brigade of the town hall , of the workers of the Extraordinary Plan for Employment of the Government of Castilla-La Mancha and the students of the Recual of the Diputación de Toledo 'Seseña ruta natura'.

The Vice President of the Provincial Council has participated in the inauguration of the improvement and rehabilitation works that the council has carried out in the 'Soto de Jembleque' natural area, classified as a Special Protection Area for Birds (ZEPA) and included in the Natura 2000 Network, and that he shared with the mayor of Seseña, Silvia Fernández; the delegate of the Board in Toledo, Javier Úbeda; the provincial delegate for Sustainable Development, Tomás Villarrubia, and the Councilor for the Environment, Cecilia Redondo.

The work that has been carried out to recover this natural area of ​​great scenic and historical value, embraced by meanders of the Jarama River and delimited by the Long Bridge of the 18th century, has consisted of cleaning, reforestation, rehabilitation of paths for hiking , the installation of furniture adapted to the environment and informative signage, as explained by Cecilia Redondo.

Specifically, the contribution of the students to the Recual has been the compilation of information on the area, the study, tourist planning, design of the signaling of the paraje, a triptych and a web page about this five-kilometer route.

For its part, the Government of Castilla-La Mancha, in collaboration with the Toledo Provincial Council, has allocated more than 1.2 million euros to the hiring of 166 workers who have launched four projects in the town of Seseña, among them the recovery of this natural space.

Silvia Fernández expressed her gratitude for the support that both the Government of Castilla-La Mancha and that of the Toledo Provincial Council are providing to Seseña and that has allowed "to value one of the treasures that Seseña has, such as the 'Soto de Jembleque' that we have recovered for the enjoyment of the residents of our town. A place -added the mayor- that has been forgotten for many years and that today becomes a place of recreation and meeting place for the citizens of Seseña».

‘Soto de Jembleque’ is a 60-hectare area, with five kilometers of trails, located to the east of the municipality, on the edge of it, framed by the Jarama River, the Long Bridge and the M-305 highway. It is a natural space configured by a riparian habitat, associated with the fluvial course of the Jarama River, very close to the convergence with the Tagus River. This enclave constitutes an important refuge for marshy species and other aquatic birds that, together with the groves associated with the Jarama plain, confer a high ecological value to this ZEPA.

The delegate of the Board in Toledo, Javier Úbeda, has advanced that the Government of Castilla-La Mancha is going to launch a project for the restoration and recovery of protected vegetation on the banks of the Jarama River in Seseña and added that « The Provincial Delegation of Sustainable Development has a very advanced technical proposal for this project which, although it does not yet have a specific start date, we estimate that it will be launched this year».

The action to be launched by the Government of Castilla-La Mancha is included in the Plan to Promote the Environment. Ecosystems for Adaptation to Climate Change in Spain (PIMA Plan) whose purpose is to set in motion that contribute to improving knowledge and monitoring of the impacts of climate change and minimizing its risks.

"Its objective is the recovery of protected vegetation in an area that is degraded and the progressive creation of an ecological corridor, which acts as a buffer between the river itself and human activities in the river valley," Javier Úbeda has indicated. , since "although the river maintains its course more or less, the disappearance of the floods and the extraction of aggregates and agricultural crops have reduced the riparian vegetation to the maximum".

The technical proposal for the recovery of this area proposes three possible plantation blocks, with a willow grove, a poplar grove and an elm grove, depending on the proximity to the riverbed, as well as the planting of bushes and tamarisks. The estimated area to be reforested would be 2,000 meters of willow grove, 1 hectare of poplar grove and 1.5 of elm grove, with an investment of around 48,000 euros.

1 Carlos Mazón proposes the abolition of all fees for... 2 A 49-year-old woman, among the thirty new deaths from... 3 The sculptor from Salamanca Ángel Mateos Bernal dies... 4 The Canary Islands add 1,265 new Covid positives over... 5 Kig Marine manufactures in Valencia the first monohull... 6 Schedule and where to watch the French Motorcycle... 7 The Real Club Náutico de Valencia is already focusing... 8 Turkey threatens to block the entry of Finland and... 9 Russia to suspend electricity deliveries to Finland 10 Murder in Laval: the SQ takes over the investigation 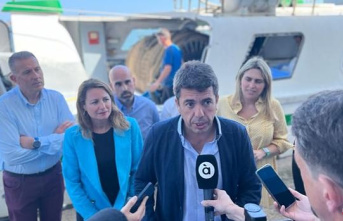 Carlos Mazón proposes the abolition of all fees for...