"See you at the stadium" for the LBJEQ's 76th season

The Ligue de Baseball Junior Élite du Québec (LBJEQ) announced at its press conference for the 76th season that it was the return of a 42-game season across Quebec.

The Ligue de Baseball Junior Élite du Québec (LBJEQ) announced at its press conference for the 76th season that it was the return of a 42-game season across Quebec. This year, the LBJEQ has joined the awareness-raising movement of the Sport'Aide team, while the league will take advantage of the month of June to promote the "Inclusion - Openness to diversity in the sports environment" approach.

At the launch of the LBJEQ, the reigning champions, the Saint-Eustache Bisons, were represented by William Perrin, Nicolas Legault, Luc Desgroseilliers, head coach Justin L'Archevêque, Alex Simard and Stéphan Ciarlo, the president and Governor of the Bisons.

The Royal de Repentigny is represented by the head coach, Mathieu Granger, Olivier St-Amant and the GM, Marc-André Ronda.

Josué Peley, who is at the helm of the Charlesbourg Alouettes and who is also a former interpreter with the Blue Jays, is surrounded by his players Xavier Boutin and Xavier Bilodeau.

Baseball Quebec will put the inclusion signature (multicolored Sport’Aide logo) on the uniforms of all their Quebec teams. Maxime Lamarche, CEO of Baseball Quebec, and Vanessa Riopel, to his right, are surrounded by Team Quebec players.

1 Montmeló without seats and the memory of Fernando... 2 Turkey maintains its veto on the entry of Sweden and... 3 Opposition to Maduro condemns Biden's new concessions 4 Austria resists as an anti-NATO stronghold in the... 5 Buffalo racist killing spree: Bills and NFL donate... 6 Study: ibuprofen may make back pain worse 7 A thousand Ukrainian soldiers still in Azovstal 8 The judicial collapse due to floor clauses will not... 9 Still no news from the jury at the Girouard trial 10 Alberta premier resigns 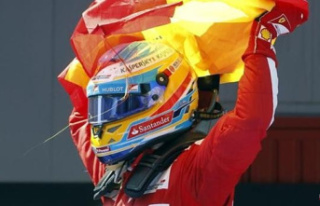 Montmeló without seats and the memory of Fernando...