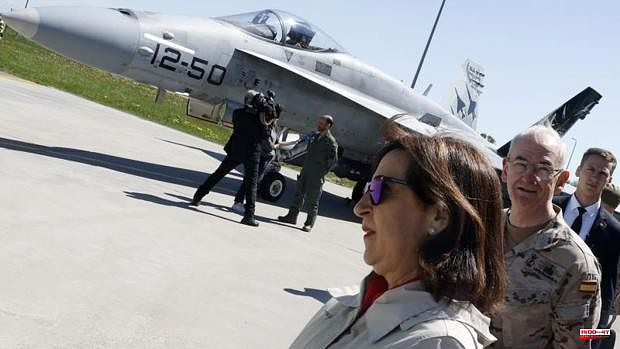 Defense Minister Margarita Robles visited the Air Force detachment in Lithuania on Monday. This Saturday is celebrated in Spain the day of the Armed Forces and the Minister of Defense wanted to have a message of encouragement and recognition to the military deployed in the Lithuanian base of Siauliai. The objective of this mission is to protect and preserve the integrity of the airspace of this Baltic republic, a NATO member since 2004.

Robles, during the visit, thanked the work of the Spanish military, who work "for peacekeeping" and underlined the importance of Spain's work with the Alliance, when this Tuesday marks three months since the Russian invasion in Ukraine.

The objective of this mission is to deter any threat that may fly over the airspace. In this month and a half since the Air Force was deployed at the Lithuanian base, there have been 12 alert outputs, known as 'alpha scramble', by Spanish fighters to identify aircraft that were flying over the airspace over which they have control. This same Monday, two Spanish fighters have had to carry out this reconnaissance work.

The bulk of the mission is made up of members of Wing 12, based in Torrejón de Ardoz (Madrid), under the command of Lieutenant Colonel David Soto Martínez as Force Chief.

Lieutenant Colonel Soto Martínez has recognized that all these alerts come from Russian aircraft, and that, although most of the time they are incursions where the Russian planes are identified, other times this is not the case and they have to carry out these reconnaissance tasks . Just over 200 kilometers from this base is the Russian enclave of Kaliningrad, so Russian air activity is constant in the area.

Spain, which is in command of the operation, shares a mission with the Czech Republic, which provides five Gripen fighters. And it also carries out joint exercises with the French and Belgian air forces deployed at the Amari base in Estonia.

At the end of March, Spain sent eight F-18 Hornet fighter planes, from Wing 12 (Torrejón de Ardoz) and their respective contingent. As the lieutenant colonel recalled, it is the first time that Spain has deployed eight fighters in an air rotation with NATO. Last year they deployed seven devices.

The staff of this mission is currently made up of 140 soldiers (130 permanent and 10 activated reinforcement serials). Most of these personnel belong to the Air Force.

It was in 2004 when NATO authorized the incorporation of new members, and among them three key ones, the three Baltic republics: Estonia, Latvia and Lithuania. Due to the inability of these countries to provide adequate air defense, the Atlantic Alliance decided to start Baltic Air Policing (BAP) missions. These missions are carried out on a rotating basis (every four months) among the Alliance countries that have offered to carry out this task. Spain has participated in this mission since 2006, and during these years, Spanish soldiers and planes have been deployed four times in Lithuania. The mission will end on August 1 after four months of deployment and the extension of this mission in Estonia is already being studied, in conjunction with the German Armed Forces, which would give knowledge at the end of August, beginning of September.

Air Policing (AP Air Policing) missions are defined by the permanent plan of the Atlantic Alliance and consist, in this case, of having two C.15M aircraft in a reaction time and launching 15 minutes (providing rapid service, plus two reserve aircraft to replace the first in case of failure. In total, since the mission was deployed they have more than 200 aircraft departures, which translates into more than 380 flight hours , most for training and only one mission has been canceled due to aircraft maintenance.

Along with the Spanish aircraft, four aircraft from the Czech Republic Air Force provide the same service at the same base as our detachment. The offer to Ukraine of the training of the Ukrainian Armed Forces on Spanish soil is maintained.

Last July, the President of the Government, Pedro Sánchez, already underlined the commitment to common defense and to Lithuania. During his visit, the president highlighted the Siauliai base as the excellent symbol "of cooperation and commitment between our two countries, and of Lithuania and Spain with all of Europe."

In addition to Lithuania, Spanish fighters monitor Bulgarian airspace. In addition, in the neighboring country, Latvia, the Spanish contingent is 350 soldiers at the Adazi base, 120 kilometers from the border with Russia. This airspace is especially sensitive since it is a regular route for the Russian air force to its Kaliningrad enclave.

1 Junts accuses the PDECat of wanting to block their... 2 Sexual violence against women, a throwing weapon in... 3 They investigate a new group rape of a woman with... 4 Young rental bonus: when can it be requested according... 5 Two sisters from Tarrasa in Pakistan are tortured... 6 The Generalitat Valenciana allocates 50 million euros... 7 Ximo Puig's brother blames the Generalitat before... 8 A kamikaze driver traveled at night in the opposite... 9 A minor stabbed at the door of a store in Vallecas 10 Four of the six cases of monkeypox in the Canary Islands... 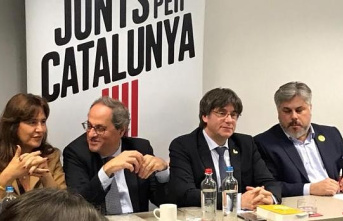 Junts accuses the PDECat of wanting to block their...