Richard Wilson, the alleged perpetrator of a double crime that occurred 19 years ago who will be tried by a popular court

Richard Wilson Torres Tineo is imprisoned in the Valdemoro prison (Madrid) accused of a double crime that occurred in Fuenlabrada 19 years ago. 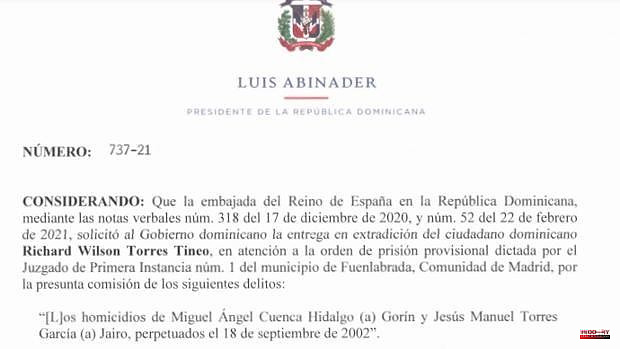 Richard Wilson Torres Tineo is imprisoned in the Valdemoro prison (Madrid) accused of a double crime that occurred in Fuenlabrada 19 years ago. He has been sleeping there since March, after being extradited to Spain by the Government of the Dominican Republic. The Civil Guard attributes to him the crime of two Spaniards, Jaro and Gorín, in a nightclub in Fuenlabrada on September 18, 2002. Their bodies, shot and decomposed, were found days later 25 kilometers away, in a stream in the Toledo municipality of And he is.

In addition to the Civil Guard, Richard was also wanted by the DEA, the federal entity that fights drug trafficking and consumption in the United States. According to sources consulted by ABC, the Drug Enforcement Administration (DEA) wanted to lay hands on him for matters related to drug trafficking and counterfeiting.

The delivery of the Dominican Richard Wilson to Spain, requested by the Court of First Instance number 1 of Fuenlabrada, took place in March. Thus ended a "laborious process" that depends on the bilateral agreements that the two countries have established in terms of Justice, according to sources from the Superior Court of Justice (TSJ) of Madrid consulted by ABC.

The extradition was carried out four months after the president of the Dominican Republic, Luis Abinader, signed the authorization on September 18 of last year. The Spanish Embassy in the Caribbean country had twice requested the delivery of Richard Wilson: on December 17, 2020 and on February 22, 2021.

The Civil Guard considers him the material author of the murder of Miguel Ángel Cuenca Hidalgo, nicknamed 'Gorín' and Jesús Manuel Torres García, known as 'Jaro'. They were shot dead, at point-blank range, inside the Anaísa pub, on Avenida de las Regiones in Fuenlabrada.

The identification of the bodies, found in the Guatén de Yeles stream, was difficult at first. His advanced state of decomposition did not help. In addition, some bullets lodged in such remote places that forensic doctors had serious difficulty finding them during autopsies.

Already in Spain, Richard Wilson declared in the Fuenlabrada court that he was demanding it and was sent to prison, provisional, communicated and without bail. He is being held in the Valdemoro prison as an investigator for the alleged commission of the double crime.

"Various investigation procedures" related to this matter are being carried out, according to sources from the Madrid Supreme Court. And, due to its criminal type, it has been transformed from summary to jury court, with which Richard Wilson will be tried by nine citizens. But it is not known when the investigation of a case that occurred 19 years ago will be closed. So much time has passed that it is unknown what will have become of the witnesses and other detainees for the double crime of Jaro and Gorín.

1 Repsol will invest 105 million in Puertollano to manufacture... 2 The Caracol room closes again by court order 3 The 'Traveller Marathon' begins, which will... 4 The 90-year-old man who triumphs in Rafa Nadal's... 5 The Pompeu Fabra University of Barcelona prohibits... 6 Rosa Benito apologizes after charging against place... 7 Slovenia invites the Catalan government to the inauguration... 8 Oaks and Derby, stellar events at the Madrid Hippodrome 9 The Alicante Water Museum hosts the sound exhibition... 10 The Xunta, with 180 million investment against fires,... 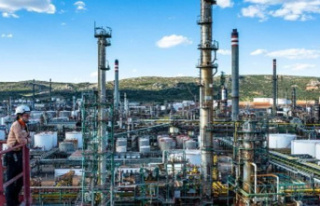 Repsol will invest 105 million in Puertollano to manufacture...