At the gates of Congress, banner in hand and with the images of his people present under the reminder that "it was not another day. 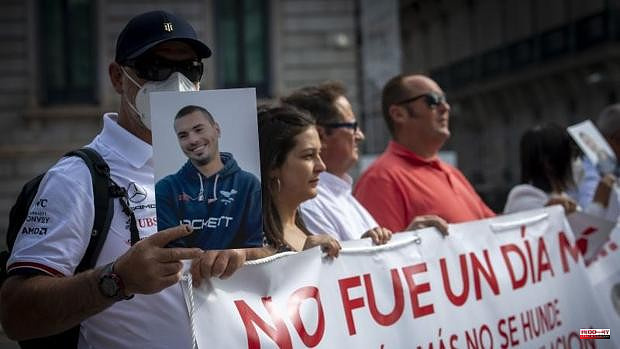 At the gates of Congress, banner in hand and with the images of his people present under the reminder that "it was not another day." A representation of the relatives of the twenty-one sailors who died in the sinking of the Villa de Pitanxo traveled to the capital of Madrid on Wednesday to try to meet with the President of the Government and remind him of his promise that he would do "the possible and the impossible" to help them . Four months after the tragedy, achieving a meeting with Pedro Sánchez so that he gives the order to go down to the wreck and thus delve into the causes of the accident continues to be an impossible task, despite the fact that the families have already burned almost all the cartridges in their provision.

The rage at the central government's closure was palpable among those who moved to Madrid to force a face-to-face with Sánchez, taking advantage of an appearance before the media. "We have called the President's Cabinet again and we have had no answer, we have been calling for weeks..." explained the spokeswoman for the victims, who demands that "someone give us explanations and answers about what they are going to do with our petition, because we run out of time".

The indignation of those close to the crew increased with the passing of the hours, and in the face of administrative silence, the victims recalled from outside the Congress that the dead "were workers." “We do not want controversy, we only ask that the president order the ship to go down to obtain evidence and that it be delivered to the judge who will finally handle the case, when the jurisdiction is clarified. These tests must be guaranteed in order to know the truth and draw conclusions, so that such a shipwreck does not happen again. We are at the door, welcome us for ten minutes and don't make us dizzy anymore, because the days go by and there are twenty-one deceased. History and all the workers of Spain will judge him, ”the daughter of a dead crew member, María José de Pazo, launched as a desperate message.

With their sights set on Brussels as the last door to call for their request to be addressed, the victims decided yesterday 'in extremis' to move from Congress to the gates of La Moncloa. A way to remind the socialist president that he is the only one capable of activating an underwater inspection, the families defend, key in the investigation process. They consider that inspecting the ship, which is about a thousand meters deep, is vital in order to mount the accusation against the ship's master, investigated for 21 reckless homicides. At their insistence, the relatives of the deceased complain that a Norwegian company offered a robot to carry out the photographic report of the ship, and that the “Government of Spain has not even thanked them”. They also regret that the window of good weather in the Newfoundland Sea will only last, experts say, until the end of August, so they urge that the descent be carried out as soon as possible.

Sánchez's silence, who did not even want to refer to the matter, was covered by the words of the Minister of Transport, Mobility and Urban Agenda, Raquel Sánchez, who referred to the open judicial investigations into the shipwreck to appeal to "prudence" when determining "what are the best means" to clarify the causes of the accident. She also commented, without delving into it, an interministerial meeting that would have been held last Tuesday to study the decline, but without conclusions. This is how Sánchez settled during the control session to the Government the question of the PP deputy Joaquín María García, who asked for explanations about the controversy. In front of a group of relatives who witnessed the debate from the rostrum, the minister used arguments to affirm that the Government "has been on the side of the victims since the first day."

During his speech, the PP deputy regretted that it had not been the head of the Fisheries portfolio, Luis Planas, who responded to his query; and he asked the minister "not to say again that it is impossible to get off the sunken ship." The applause came from the popular bench that also applauded the families present in Congress, visibly moved at the end of a day that they summed up with a heartbreaking "we leave empty handed."

1 After visa requirements, Venezuelans have a large... 2 Algeria prohibits commercial operations with Spain... 3 1-2: Valdepeñas takes advantage in a magical minute 4 Reborn in Madrid de los Austrias 5 Clara Villalón shares her favorite restaurants, shops... 6 What to do in Madrid this weekend: Flamenco, books,... 7 The zarzuela brings joy back to Veranos de la Villa 8 Photographic mission through the geography of Madrid... 9 Ayuso leaves sexual development out of the Early Childhood... 10 Victory or trouble in Geneva 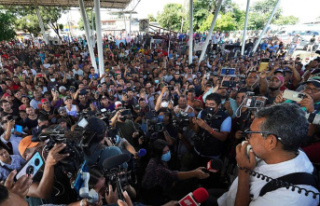 After visa requirements, Venezuelans have a large...