For three months, millions of people traveled all over Germany with the 9-euro ticket on buses and regional trains.

For three months, millions of people traveled all over Germany with the 9-euro ticket on buses and regional trains. The campaign period for the special ticket, which was originally intended primarily to relieve inflation-stricken consumers, ends at the end of August. Whether there will be a follow-up offer is currently being hotly debated. However, some lessons can already be learned from this period in order to improve local public transport in general.

Public transport in Germany is a network of more than 100 tariff associations, confusing responsibilities and confusing price levels. If you want to take a bus or train in an unfamiliar region, you will quickly lose track in this jungle of tariffs. From the point of view of many experts, the 9-euro ticket has shown that it can also be easier, even if the tariff patchwork quilt will not be overcome that quickly.

"I think an additional offer to the existing tariffs, which enables journeys in public transport across a federal state or several across, is a sensible and viable solution," says Philipp Kosok, traffic expert at the interest group Agora Verkehrswende. Simpler tariff options are needed, which could also exist alongside local regulations for the time being.

Kosok also sees a need to catch up when it comes to technical implementation: Not every transport association needs its own app for ticket sales. "There has been progress in recent years, but we are nowhere near as far as Switzerland, for example," he says.

For nine euros a month with public transport throughout Germany - a tempting offer that millions of passengers have taken advantage of. In order to persuade more people to switch from cars to buses and trains, price plays an important role. "However, we have also learned that some differentiation is very important," says Karl-Peter Naumann, Honorary Chairman of the Pro Bahn passenger association. "From a Berlin perspective, it makes sense that a trip to the Müggelsee in the city is cheaper than a trip to the Baltic Sea." Simple and easy-to-understand offers are also important here.

Agora expert Kosok also sees the price as an important lure for public transport. Above all, he sees the federal government as having a duty to ensure affordable and stable prices through additional financial resources.

Full trains, numerous delays and cancellations - especially on the routes popular with tourists, the 9-euro ticket has shown once again that the German rail network is not equipped for significantly more passengers. "Even before the 9-euro ticket, local transport was heavily used on many routes," says Kosok. "For the companies, this three-month period was an enormous additional challenge." In addition, there were numerous construction sites that continued to slow down train traffic in many places in the summer.

But there is not only a lack of infrastructure on the rails, but also of sufficient buses and staff in the cities and communities. "It needs larger fleets, more bus lanes and better pay," says Naumann from Pro Bahn.

Above all, growing cities and municipalities have significantly increased the range of transport in recent years, says Kosok. There, the high demand could be absorbed well by the special ticket. But in many regions there is a high need for investment. Here, too, the federal government must significantly increase its funds, the expert demands.

The loudest opponents of an extension of the 9-euro ticket are still the trade unions. "The workforce has reached the breaking point and in some cases exceeded it," said the Vice Chairman of the Railway and Transport Union (EVG), Martin Burkert, at the end of July. The train drivers' union GDL made a similar statement at the time. After all, it is the train attendants who are in the front row when passengers are frustrated by cancellations and delays and who bear the brunt.

Deutsche Bahn has hired thousands of new employees in regional transport in recent years. However, due to the high level of sick leave as a result of the Corona summer wave, there were always bottlenecks.

However, there is also a general lack of staff in local transport companies. The Berliner Verkehrsbetriebe (BVG) had to reduce their bus services by three percent at the beginning of the new school year this week because, in addition to the numerous cases of illness, the job market was almost completely empty. However, a functioning public transport system cannot be managed without sufficient staffing levels.

Also look at the following series of photos:

1 Susanne Schröter: Islam researcher on the export... 2 Russian invasion: War against Ukraine: That's... 3 Gas supply: Uniper employee representatives for federal... 4 Transfer: Augsburg's Felix Götze on loan to... 5 Accident: car drives into the living room – 91-year-old... 6 Moon orbit: Nasa cancels the start of the "Artemis"... 7 Training board: vibration board: This is how you effectively... 8 Exceptional players at the EM tournament: Basketball... 9 Luke Mockridge: This is how he celebrates a small... 10 Anti-Semitism criticism: documenta makers: Nobody... 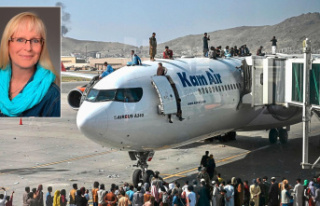