Quarrel to the left of the PSOE: Díaz and Garzón disavow Podemos for NATO

The increasingly undeniable 'cold war' between Yolanda Díaz and Podemos experienced a new episode that was reflected in the eyes of the whole world in the press conference after the Council of Ministers. 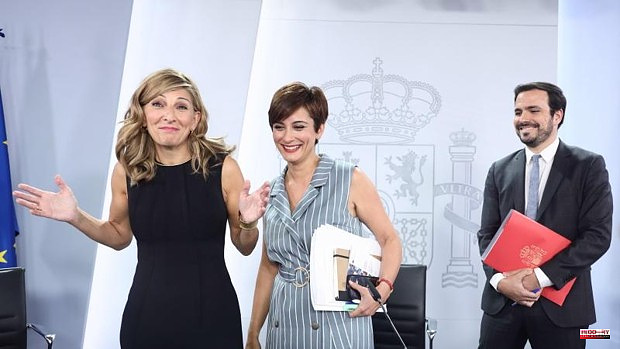 The increasingly undeniable 'cold war' between Yolanda Díaz and Podemos experienced a new episode that was reflected in the eyes of the whole world in the press conference after the Council of Ministers. In La Moncloa, the second vice president and the Minister of Consumption and leader of the United Left (IU), Alberto Garzón, accompanied the Government spokesperson, Isabel Rodríguez, to report on different projects related to her departments. And during question time they did not miss the opportunity to make it clear that the battle waged by the purple party against the NATO summit in Madrid in a month, the mere holding of which they even discuss, is none of their business.

Garzón, like the commons, the Catalan faction of the party, aligns with Díaz in the internal battle unleashed around the candidacy for the next general elections of the Minister of Labor, which he intends to convey through the platform 'Sumar' ,

recently created, and with a very testimonial role of Podemos.

In the first place, and as ABC already told yesterday, Díaz excused his absence on Monday at the commemoration of the 40th anniversary of Spain's entry into NATO due to "medical tests" that he had arranged for weeks, according to sources confirmed by his equipment. In other words, it threw to the ground the version of Podemos that the absence of ministers from the coalition partner of the PSOE was due to a disagreement with the act, chaired by King Felipe VI and attended by the Secretary General of NATO, Jens Stoltenberg.

Diaz also disavowed the rumor spread by Ione Belarra that there could be irregularities in some contracts awarded on the occasion of the Madrid summit. “As vice president, I can tell you that this contract was approved in terms of legality, the file is available to all of Spanish society and, I insist, it meets all legal requirements,” Díaz emphasized, visibly upset, while Garzón nodded from his seat after having previously minimized his discrepancy on the occasion of NATO, something that, he asserted, "is evident" but, he clarified, that does not break his "unwavering commitment" with the coalition government. Sources close to the Minister of Consumption express themselves along the same lines and totally disassociate themselves from Podemos's accusations about the contracts.

Garzón tweeted in 2013 that NATO was "a legal terrorist organization" attaching a photograph of a frigate moored in Malaga. But he did not use those terms, dressed in the institutional suit at the press conference of the Council of Ministers. Garzón did explain that IU was born in the mid-1980s precisely in the heat of the 'NO' campaign in the referendum on remaining in the Atlantic Alliance called by Felipe González.

For his part, the president of the United We Can parliamentary group, Jaume Asens, from the commons sector, also left the door open for the purples to participate in the summit, contrary to what Podemos assured yesterday through his spokesman Javier Sanchez Serna. Asens said they are "critical" of NATO because it was created in a context that no longer exists, but that "may be compatible with institutional representation."

Asked about the controversy in Brussels, after attending the extraordinary European Council, Pedro Sánchez intervened between the two sides of his government partner. The head of the Executive branded the positions shown by United We Can as “testimonial”, including the absence from the 40th anniversary event held in Madrid, although it is true that the Podemos ministers were not invited to the event.

"I respect these positions, some of them come from a position on NATO that comes from afar, from when those of us who are here were small," he said, while defending that "my responsibility as President of the Government is to guarantee defense and security from my country. And that is guaranteed by its membership of the EU and its membership of NATO. This is known from Finland and Sweden, which are knocking on NATO's door to join, to Spain and Portugal »he sentenced.

1 'The Imperial'. A historic cafe in Zocodover... 2 Barcelona opens its first literary residence in Collserola 3 Sixth outbreak of COVID with 36 positives in Ocaña... 4 Putin follows the 'Orwell manual' in Mariupol:... 5 These are the cheapest hours of electricity this Wednesday 6 Armengol reduces tourist places by law amid doubts... 7 Reyes Maroto highlights that the dairy sector is a... 8 Correos faces three days of strike in the midst of... 9 Sánchez puts obstacles to gas pipeline connections... 10 The English Court closes the centers of La Vaguada... 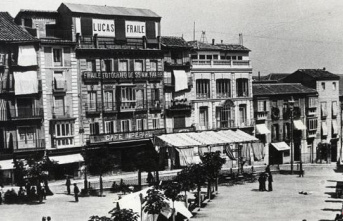 'The Imperial'. A historic cafe in Zocodover...