Putin justifies himself before Africa and blames the West for hunger

The top Russian leader, Vladimir Putin, met yesterday in the spa city of Sochi, on the shores of the Black Sea, with the president of the African Union, the Senegalese Macky Sall, to discuss the food crisis that is causing the war in Ukraine , whose blocked ports prevent the export of cereals. 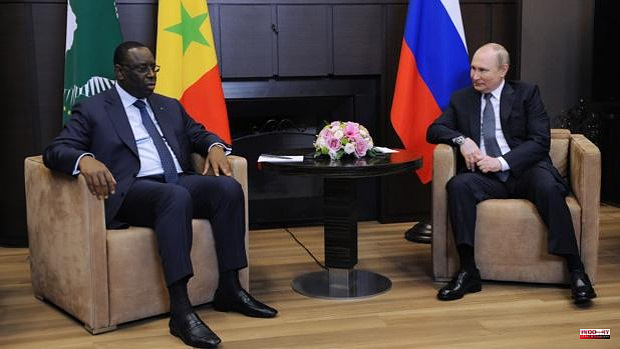 The top Russian leader, Vladimir Putin, met yesterday in the spa city of Sochi, on the shores of the Black Sea, with the president of the African Union, the Senegalese Macky Sall, to discuss the food crisis that is causing the war in Ukraine , whose blocked ports prevent the export of cereals. According to the Kremlin spokesman, Dmitri Peskov, Putin told Sall, who attended in the company of the president of the African Union Commission, Moussa Faki Mahamat, that the fault of the grain not reaching its recipients lies with kyiv and The West, not Moscow.

And this despite the fact that Russia has seized much of the southern coast of Ukraine and its warships control access to Ukrainian ports on the Black Sea.

Before the start of the meeting in Sochi, Peskov announced that the African leaders "will receive exhaustive explanations from the Russian president about his vision regarding grain from Ukraine." “They will find out what is happening there, who is mining the ports, what is needed to move the grain, and that Russia is not blocking those ports.”

In any case, at the beginning of the talks yesterday in Sochi and after a brief introduction by Putin, Sall said that Africa is a "victim" of the war in Ukraine. In his words, "I am here to ask you to be aware that our countries are victims of these crises" and stressed that, however, "most African countries avoided condemning Russia" for unleashing the war in Ukraine in the two votes held at the UN. The president of the AU, who is in turn of Senegal, said he feared a "famine hurricane" on the African continent, which acquires more than half of the wheat it consumes from Ukraine and Russia.

According to Sall, the sanctions have affected Russia's logistical, commercial and financial chain, which, in his opinion, has led to African countries "being deprived of the cereals that come from Russia and their fertilizers." The African dignitary expressed the wish that the food sector be left out of the sanctions, "in particular cereals and fertilizers," he added.

Russia and Ukraine account for almost a third of global wheat supplies, while Russia is also a key global exporter of fertilizers and Ukraine is a major exporter of corn and sunflower oil. In separate telephone interviews last week with his French counterpart, Emmanuel Macron, German Chancellor Olaf Scholz, and Italian Prime Minister Mario Draghi, Putin demanded the lifting of sanctions and the cessation of military aid to Ukraine as measures for his country to resume grain exports and allow those of Ukraine by unblocking the ports. kyiv has described such appeals as "blackmail".

The Russian president told Sall yesterday that "our country has always been on the side of Africa, has always supported Africa in its fight against colonialism, and I am very pleased to note that in 2019, here in Sochi, the summit was held Russia-Africa”. He stressed that, in this new stage, "we attach great importance to our relations with African countries."

In his opinion, “Africa's role on the international scene is growing, in general, in political terms. We believe that Africa as a whole and its individual states, with which we traditionally have very good, without exaggeration, friendly relations, the whole of Africa as a whole has great prospects, and it is precisely on this basis that we intend to further develop our relations with Africa as a whole.

Next week, Russian Foreign Minister Sergei Lavrov is scheduled to visit Turkey as part of efforts to devise a plan to unblock Ukrainian grain exports through the participation of Turkish escort ships. Since Russia invaded Ukraine on February 24, more than 20 million tons of grain have accumulated in the country's silos. The first consequence has been an unprecedented global rise in grain and fertilizer prices.

Even the Belarusian dictator, Alexander Lukashenko, has said he is willing to facilitate the transit of Ukrainian cereals to the ports of Poland, Germany and the three Baltic republics, but in exchange for these countries lifting sanctions and also allowing the transfer of Belarusian goods using those same ports.

Yesterday, the European Union made effective the new package of sanctions against Russia. These include a progressive embargo on most of its imports of Russian oil, after weeks of intense negotiations with Hungary. The package removes the largest Russian bank, Sberbank, from the Swift interbank system - an essential piece for processing international payments and transfers - and expands the list of sanctioned Russian individuals and entities.

It also includes former gymnast Alina Kabaeva on the European blacklist, who is credited with a romantic relationship with Vladimir Putin, but denied by the Kremlin. Kabaeva, a highly awarded former gymnast, has already been sanctioned by Canada and the United Kingdom for her closeness to Putin.

1 The Spanish Enerside connects its fourth solar park... 2 Hortensia Herrero inaugurates the immersive art installation... 3 Schedule and where to see Swiatek - Gauff, the women's... 4 Meadows will not be charged for the ex-Trump aide... 5 McCormick gives in to Oz during the Pennsylvania GOP... 6 Charli D’Amelio looks stunning in a Neon Yellow... 7 Katie Maloney Responds to Raquel Leviss' Observation... 8 Kylie Jenner sunbathes on a boat in a Sexy Silver... 9 Eva Mendes says "It's all a team effort"... 10 Joe Don Rooney, Rascal Flatts' DJ, Pleads Guilty... 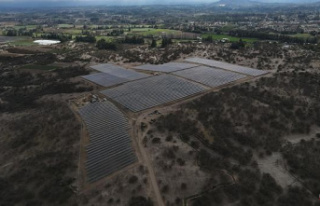