Protests in Morocco of workers who cannot go to Spain

This Tuesday was the day on which Moroccan cross-border workers could go to Ceuta and Melilla to work. This Tuesday was the day on which Moroccan cross-border workers could go to Ceuta and Melilla to work. However, it has not been possible. That has ignited the discomfort of the group, which has been complaining about the treatment that has been given to them for weeks. Thus, a group of these employees, who have not yet been able to complete their procedures to return to work in Ceuta, have gathered next to the Ibis de Castillejos hotel. Most of them were people who were working in the hospitality business or who were domestic workers.

According to leaked information, dozens of people have appeared first thing in the morning, around 7:00 a.m., at the pass to be able to cross. Something that they have not been able to do, since they did not have the visas or they lacked some procedure to complete.

In this sense, the Moroccan security forces have acted to clear the border for those who could cross into Spain through Tarajal. “It is very strange, because there is no one there. There are only a couple of people to cross, ”said one of the residents of Ceuta who stopped by in the morning to go to the doctor.

And it is that, between the dissolution of the concentration, a protest against the complexity of the procedures to return to work in Spain, and the lack of issued visas, it was very difficult for a cross-border worker to be in Ceuta this first day in which they could spend to work. The same in Melilla, where the Government Delegation has reported that none of these employees have passed all morning.

Official data said that only 80 people could access Melilla this Tuesday. Those figures became 150 people who could reach Ceuta. A small number of which only one woman was seen, who crossed with a one-day visa to renew documentation and be able to return to work at home in the coming days. In the Spanish part of the fence, another worker who said she had been trapped and lost her documentation was waiting for them to take her fingerprints at Immigration and thus be able to start her procedures to get regularized. They are the few examples of a group that is abandoned by Spain and Morocco.

1 The Valencian Community reports 3,458 new cases of... 2 The SURNE-Eskarra Trophy Regatta announces the arrival... 3 Milan changes ownership: the sale to the RedBird fund... 4 Kevin Escoffier is already sailing with the new IMOCA... 5 The Basics of Using Online Social Casinos 6 Violence against minors intensifies in López Obrador's... 7 The vindication of water as a strategic good 8 Veganzones: "They want to implement ideological... 9 The A-5 in the direction of Madrid was cut due to... 10 She kills her neighbor in Zaragoza 21 years after... 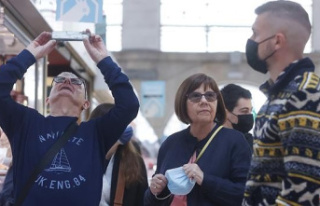