Pride Madrid 2022: The massive march returns with 50 floats and Plaza de España as the epicenter of the festivities

The novelty is the return of normality. 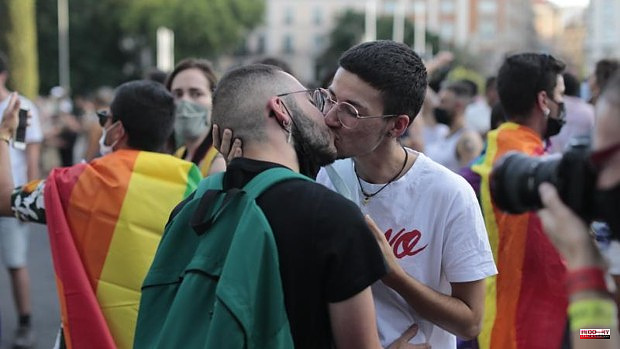 The novelty is the return of normality. The floats, the stages and the crowds of the most uninhibited party in Madrid return after the pandemic break and last year's decaffeinated celebration. Pride 2022 "is going to be as always," said the vice mayor, Begoña Villacís (Cs), in the municipal plenary session on Tuesday. Same route, same actions, same cleanliness and security deployment, with a single change of location. The Plaza de España will replace the Puerta del Sol, which is under construction, as one of the epicenters of Pride. And there will be no rainbow flag (yes lighting) on ​​the facade of the town hall, where it has only waved once, in 2019, since José Luis Martínez-Almeida took the helm of the Cibeles Palace.

There are 30 days left for the demonstration for LGTBI rights that will start from the Atocha station and will end in the Plaza de Colón on July 9. Its organizers —the State Federation of Lesbians, Gays, Trans and Bisexuals (FELGTB), the LGTB Collective of Madrid (Cogal) and the Association of Companies and Professionals for Gays and Lesbians of Madrid and its Community (AEGAL)— foresee an influx of 2 million people and the participation of more than 50 floats from different institutions and associations.

The details of the party, which has been delayed a week to avoid coinciding with the NATO summit, between July 1 and 10, have not yet been revealed. The permits for the different Pride events are still being processed, although the hot spots are already marked on the Madrid map. The stages will be set up in the Plaza de Pedro Zerolo, which will host the proclamation, in the Plaza de Callao, in the Palacio de Cibeles, in the Plaza de Colón and, one more novelty, in the Plaza del Rey, where it will be staged for the first time. once a platform dedicated to women.

The noise exemption is another of the fundamental authorizations for the celebration of Pride. The city council has not yet received the request from the organizers, according to reports from the Environment and Mobility Area. Since 2008, the consistory grants these licenses so that the festival —declared a property of general interest— can exceed the maximum noise levels included in the ordinance during the time the celebrations last and in the places where they take place. The government of former mayor Manuela Carmena, in fact, forgot to erase these limits in 2016, which led to fines for the organizers.

It was the councilor of the Mixed Group —formed by the three wayward mayors of Más Madrid— Luis Cueto, Carmena's former chief of staff, who brought the issue of Pride to the fore on Tuesday. «I had to organize the different areas, I know how complicated it is; the news that reaches us is that we are going through bad weather », he declared in the chamber, where he asked the government team to share the details of the mobility, cleaning and security plan. Also to resolve the rumors that "you don't have to install those nonsense urinals."

Since this mandate, the planning of Pride corresponds to the Vice Mayor's Office (formerly, Mayor's Office) and it fell to Villacís to answer to the Carmenista mayor. "Pride is going to be celebrated like every year" pre-pandemic, said the deputy mayor. “He does not go to the Casa de Campo, he stays in Madrid,” he added, referring to the statements made in an interview with ABC by the Vox spokesperson in the regional Assembly, Rocío Monasterio, about expelling the party from the center to “ do not disturb". The area that it leads, which began meetings with the different associations and districts (Centro and Moncloa-Aravaca) on April 7, also confirms that urinals will be deployed.

In May 2020, the Supreme Court settled a recurring controversy and ruled that the official flags (that of Spain, the Community of Madrid, the town hall, the European Union) are the only ones allowed in public buildings. Goodbye to the rainbow flag that decorated Cibeles in the time of Carmena and the first year of Almeida. The issue, which has always divided the two-headed government of PP and Ciudadanos, was rescued by Vox in plenary, where it urged the mayor to comply with "the prohibition of displaying unofficial flags or banners of an ideological nature that break with the due neutrality that they have to have the institutions. The proposal was discarded: only Vox and PP voted in favor.

The popular move away from Javier Ortega Smith's speech. "The flag of Spain already represents all homosexuals and all heterosexuals, not a 'lobby'," said the municipal spokesman. But the PP hid behind the "neutrality" of the institutions to support the position of its investiture partner. Citizens, for their part, resorted to the Supreme Court ruling to justify the absence of the rainbow and distance themselves from the PP. They want to, but they can't. And they save the LGTBI banners that are displayed in some district meetings. "There is not even a judicial pronouncement against the symbology that we have in the boards," Villacís stressed.

The Mixed Group's proposal to place a plaque in the Pedro Zerolo square in honor of the fight for LGTBI rights did go ahead (with the votes against Vox). The small monument will be unveiled to kick off the Pride, a gesture that the president of AEGAL, Juan Carlos Alonso, thanked. "After two years of the pandemic, in which the increase in hate speech has been directly proportional, it is very important to make ourselves visible," he said at the Cibeles Palace, where he attended the plenary session as a guest. "We're ready, ready and 'prepare' to do it again." 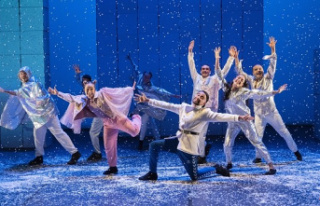 The Canal Theaters present their season for 'omnivores'