Russia and Turkey, according to the Russian press, have reached, thanks to UN mediation, a preliminary agreement to unblock the export of Ukrainian cereals through a maritime corridor in the Black Sea from the port of Odessa. 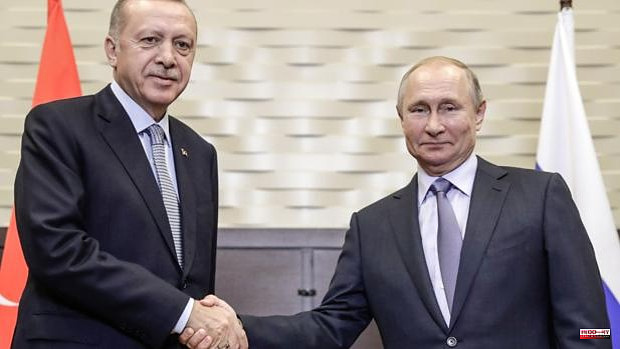 Russia and Turkey, according to the Russian press, have reached, thanks to UN mediation, a preliminary agreement to unblock the export of Ukrainian cereals through a maritime corridor in the Black Sea from the port of Odessa. Turkish President Recep Tayyip Erdogan has offered to help clear the Ukrainian coast of Odessa and escort Ukrainian ships carrying the grain, a proposal supported by Russian President Vladimir Putin. However, the 'Bloomberg' agency, which cites sources from the negotiation, assures that Ukraine rejects the content of the pre-agreement in its current wording.

According to the agency, the plan designed by Moscow, Ankara and the United Nations contemplates demining the sea around Odessa and guaranteeing the safe exit of ships to the Black Sea under the auspices of the UN.

But Moscow demands to be able to inspect merchant ships to prevent arms trafficking. This is one of the conditions that kyiv, whose representatives did not participate in the negotiations on Monday, flatly rejects.

Ukraine also fears that neutralizing Odessa's coastal defenses to allow ships to load grain would leave the port unprotected, at the mercy of a possible Russian attack. In this regard, Ankara trusts that the United Nations intervention can help to eliminate the security concerns of the Ukrainian authorities.

The parties are scheduled to meet this Wednesday in Ankara in the presence of Russian Foreign Minister Sergey Lavrov to definitively sign the agreement. However, this Monday it was not yet known whether Ukraine will send its delegation. In the opinion of Taras Kachka, Deputy Minister of Economy and representative in the area of ​​Trade of Ukraine, "Russia seeks to endorse Ukraine the responsibility for the interruption of supplies." In his words, "the fact is that the food crisis was artificially created by Russia and Russia alone."

The Ukrainian Foreign Minister, Dmitro Kuleba, for his part, has declared through Twitter that Russia is not to be trusted. According to his point of view, “Putin says that he will not use trade routes to attack Odessa (...) but he also assured that he did not intend to invade our country. We cannot trust Putin, his words are worth nothing ».

Turkey's idea, once the sea in front of the port of Odessa has been cleared and the departure of ships guaranteed, is to establish a center in Istanbul for cargo control and coordination. But, according to estimates from the Turkish Presidency, once the agreement is signed, "it will take between three and five weeks to launch the operation."

Russia's 'special military operation' in Ukraine is preventing Ukrainian grain from reaching world markets, which, in addition to driving up its price, threatens to cause serious famine in Third World countries. At the moment, Ukrainian grain is being exported by rail to the European Union.

Since the start of the war on February 24, about 22.5 million tons of grain have been blocked in Ukrainian ports. Ukraine is the world's fourth largest exporter of wheat and corn with almost 10 percent of the market.

Ukrainian President Volodymyr Zelensky said on Monday that the amount of grain for export blocked by the war could triple in the fall to 75 million tons. As he told the media, "right now 20-25 million tons of cereals are blocked, and this fall this figure could rise to 70-75 million tons." "We need maritime corridors and we are talking about it with Turkey, the United Kingdom and the UN (...) also with Poland and the Baltic countries to export the grain in smaller quantities by rail," he said.

In an interview with the Russian channel 'Rossiya 24' broadcast this weekend, Putin said that "there are no problems with the export of grain from Ukraine" and also called for "not exaggerating" the importance of kyiv in the planet's food security. Shortly before, during a meeting in Sochi with the president of Senegal, Macky Sall, the head of the Kremlin insisted that global food problems began "long before" the invasion of Ukraine.

In his opinion, "the problems began to emerge as early as February 2020 during the fight against the consequences of the coronavirus pandemic." Putin also blamed the food deficit on the sanctions that the West has imposed on Russia. According to Putin, to normalize grain exports it would be necessary to lift sanctions on Russia and stop supplying weapons to Ukraine. In this regard, the head of European Diplomacy, Josep Borrell, believes that the Russian president "is using hunger as a weapon, to blackmail."

1 The lace for small business: wages rise 6% to the... 2 Nadal: "More than winning the big four, I would... 3 UN to Cyprus: Turkey seeks complete control over the... 4 A report indicates that the navigation equipment of... 5 In office, Dominican Republic cabinet minister murdered... 6 These are the cheapest hours of electricity this Tuesday 7 The judge of the Gali case will investigate this clandestine... 8 The US approves the confiscation of Abramovich's... 9 Boris Johnson saves his own party's confidence... 10 More reproaches than agreements at the 'summit'... 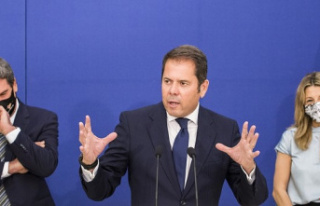 The lace for small business: wages rise 6% to the...