Pablo Picasso (1881-1973) and Doménikos Theotokópoulos, better known as El Greco (Crete, 1541-1614) l, meet for the first time in the house-museum that the Cretan painter has in Toledo and that allows to contemplate, in the same space, to these two painters who broke norms and revolutionized art. 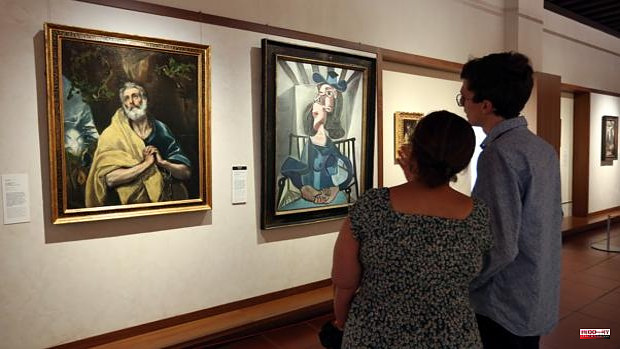 Pablo Picasso (1881-1973) and Doménikos Theotokópoulos, better known as El Greco (Crete, 1541-1614) l, meet for the first time in the house-museum that the Cretan painter has in Toledo and that allows to contemplate, in the same space, to these two painters who broke norms and revolutionized art. It is a face-to-face meeting that reveals the common features and the color palette that made the work of these two geniuses a reference to the world.

Picasso admired El Greco, and it is well known that the Cretan painter influenced the work of great Spanish painters. So the arrival from this Wednesday of two canvases from Malaga to Toledo, which make up the exhibition "Picasso visits el Greco", has become 'good news' and one more claim for the cultural offer of the regional capital.

The artist from Malaga has come to the Museo del Greco de Toledo "la casa del cretense" to show two of his reference works: "Woman with a hat sitting in an armchair" and "Venus and love", in a museum that would have been a reference, just as the Prado was, if it had existed when Pablo Picasso began to paint.

This transfer has been made possible thanks to the institutional exchange with the Kunstmuseum Basel in Switzerland, which has made it possible for two works by Picasso to be exhibited at the Museo del Greco until September 25, which were last in Spain in 2015, at the Museo del Prado, as explained this Wednesday during the presentation of the paintings by the director of the El Greco Museum, Rosa Becerril.

In return, the Museo del Greco has lent 'San Juan', 'San Bartolomé' and 'San Simón', three paintings from El Greco's Apostolate that will form part of the 'Picasso-El Greco' exhibition, which can be visited from 11 June to September 25 at the Swiss museum.

The location of 'Venus and love' has been installed in the library, in front of Greco's 'San Bernardino', which is a characteristic work of his final production; and 'Woman with a hat sitting in an armchair' is in the Apostolate room, next to 'The tears of San Pedro' by Greco, with which it coincides in composition and colours.

'Woman with a hat sitting in an armchair' (1941-1942) is an oil on canvas that refers to the classic three-quarter portrait of Spanish art, but transforms and deforms the formal elements of the body and the face divided into two well-differentiated parts. The muse is the French photographer and artist Dora Maar (1907-1997), with whom Picasso had a love affair for almost ten years, coinciding with a turbulent period on a political and social level.

'Venus and Love' (1967) is an oil on canvas depicting a classical mythological subject, and his style is characterized by rapid, large, and impulsive brushstrokes. It is the final stage, the last years of the artist who, from 1961, lived in the south of France with his wife Jacqueline Roque (1927-1986).

At this stage Picasso made versions of masterpieces, with a risky dialogue with the great artists. The genius from Malaga was inspired by Titian's 'Venus in the mirror', but also by the fast and increasingly loose, as if unfinished, line of Greco's latest works.

For his part, the general director of Cultural Heritage and Fine Arts of the Ministry of Culture, Isaac Sastre de Diego, has acknowledged in this act that Picasso noticed a painter who at that time (late 19th century and early 20th century) was beginning to be rediscovered, El Greco, who 300 years earlier "had also decided not to follow the rules."

And he pointed out that it is a "very happy" day for Culture and for Toledo because "we meet" two geniuses, more specifically "a genius, Picasso, who comes to visit another genius at his home, in Toledo."

And the director of the El Greco Museum, Rosa Becerril, ended the presentation by citing the words that Picasso wrote in 1898: «Greco, Velázquez, inspire me».

The presentation ceremony was attended, among others, by the Government delegate in Castilla-La Mancha, Francisco Tierraseca, the Deputy Director General of State Museums, Mercedes Roldán, the Councilor for Cultural Affairs, Teo García, and the director of the Museum of Santa Cruz, Anthony Davila.

1 The Chair of the Tajo sees the minimum flows of the... 2 The Xunta agrees with Andalusia the loan of a Picasso... 3 The Virgen del Remedio park in Alicante is named after... 4 The PP denounces that the Generalitat Valenciana "is... 5 The 'first' Ronaldo completes the Camino... 6 Mónica Oltra and her ex-husband were registered in... 7 Algeria suspends the friendship and cooperation treaty... 8 An "undetected movement on the ground",... 9 Carlos Mazón welcomes the mountaineers from Alicante... 10 Agbar consolidates the General Meeting of Stakeholders... 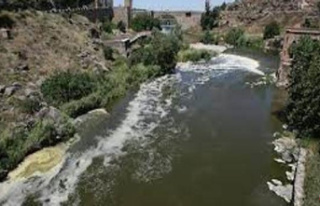 The Chair of the Tajo sees the minimum flows of the...