Pep Cazador is proclaimed champion of Spain of ILCA 7

The fourth and final day of the ILCA 7 Spanish Championship, which has been taking place at the Puerto Deportivo Juan Montiel de Águilas, began with a southeasterly wind that, oscillating between 7-8 knots in intensity, allowed for a delta rise and Punctual departure at 12:00. 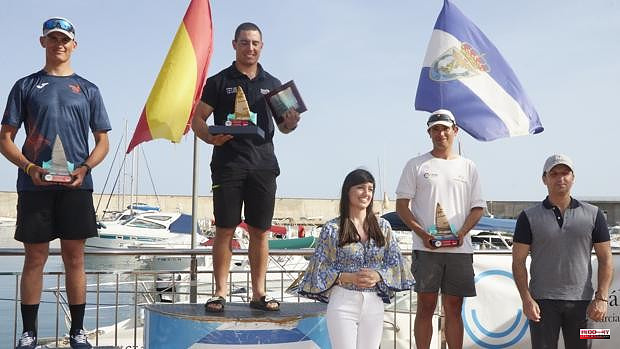 The fourth and final day of the ILCA 7 Spanish Championship, which has been taking place at the Puerto Deportivo Juan Montiel de Águilas, began with a southeasterly wind that, oscillating between 7-8 knots in intensity, allowed for a delta rise and Punctual departure at 12:00. And although the wind has dropped, causing a long wait at sea, finally after 2:30 p.m., the wind picked up intensity again and allowed a new test to begin, closing the championship with 8 disputed races.

The Balearic Pep Cazador (CN s'Arenal) has given the big surprise of the day. Although he jumped into the sea fifth overall, the regularity obtained in each of the tests, added to the fact that his main rivals have not been successful on this last day, have made him proclaim champion of Spain of ILCA 7 2022.

'I'm very happy. In addition, the emotion that everything has not been resolved until the end has made it much more emotional. I have concentrated on doing my regatta and it has gone well for me, the others have failed and that is what has made me win' says Pep Cazador.

The sterns have been decisive. The hardest moments of the day have come in this section where the sailors have had to bring out their most technical side to surf, pick up speed and try to scratch positions since the tight classification meant that a position above or below was key to enter or not in the national medal table.

Any detail has been conclusive and Carlos Roselló (CN Ibiza) has cost him the title. Although he reached the lead in the penultimate race, a tenth in the eighth test has cost him the national gold and finally he has hung the silver of the championship.

The absolute national medal table is completed by the Catalan Ricard Castellvi (CN Cambrils) who in turn has been proclaimed champion of Spain of ILCA 7 in the sub21 category. The second place in sub21 has gone to the Valencian Gonzalo Suárez (CN Altea) and in third position Javier Seguí also from the Balearic Islands (RCN Pto Pollença) being first in the sub19 category.

The great winner of the regatta was Agustín Vidal. The one with the Argentine flag did not opt ​​for the national title, but he has been competing these days in Águilas to take the gold of the regatta. Thus, he has reached the last round level on points with Carlos Roselló and Ricard Castellvi, and it has been in this last regatta, where Agustín has managed to remain calm and sentence the championship.

‘I am very happy to win. It has been a difficult championship in which in the end what has been most valuable has been perseverance and I have not had bad regattas. I've had very good feelings ahead of the World Cup, which is my next goal, and winning this championship raises my self-esteem for the next ones'

Given the international participation in this championship, the organization has decided to create the 'Juan Montiel International' class for sailors who came from other countries. It has been the Argentinian Agustín Vidal who has won in this category, followed by the Portuguese José Medes and in third place the Ukrainian Andreii Verdish.

At 5:30 p.m., the ILCA 7 Spanish Championship trophies were awarded at the facilities of the Juan Montiel Nautical-Sports Association, which was attended by Juan Montiel, founder of the Puerto Deportivo Juan Montiel; Juan Francisco Montiel, president of the ANDJM; Marina Munera, general director of mobility and coastline of the Autonomous Community of the Region of Murcia; M.ª Carmen Moreno, mayor of Águilas; Cristóbal Casado, Councilor for Sports of the Águilas City Council and Pedro López, president of the Costa Cálida nautical station.

1 A second and a ninth leave Spain out of the Bermuda... 2 Emmanuel Macron can appoint a woman head of government... 3 Russia raises the number of refugees from Ukraine... 4 Borrell calls for an effort from EU countries to unblock... 5 Lava flows seen like never before thanks to high-resolution... 6 Melania Trump: the suffering of Americans, the future... 7 The borders of Ceuta and Melilla open this Tuesday... 8 The TS confirms 22 years in prison for a man who stabbed... 9 PSG: Messi's father hopes for his return to Barça... 10 Victims of crime: the support network wants to strengthen 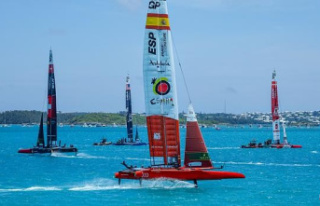 A second and a ninth leave Spain out of the Bermuda...