Pendande, Hermosa, Peña and Salvadores, novelties for the tour of the Spanish women's team 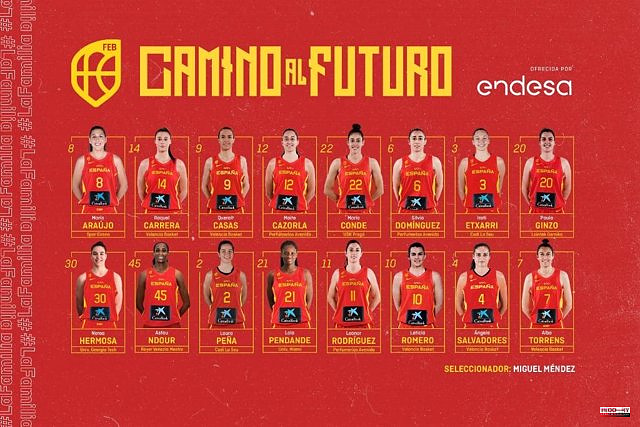 The point guard Laura Peña, the shooting guard Ángela Salvadores and the pivots Lola Pendande and Nerea Hermosa are the main novelties in the list of 16 players that the Spanish coach, Miguel Méndez, has offered this Tuesday, to face the tour of matches to prepare the next appointments international.

Six months after the 'windows' of Eurobasket 2023, the Spanish team will once again focus on the 'Road to the Future Tour', which aims to work on the renewal and consolidation of the group for 20 days, from May 24 to June 17.

Silvia Domínguez, Maite Cazorla and Laura Peña will attend the call as bases; Leticia Romero will alternate between the position of base and escort sharing position with Ángela Salvadores, Leo Rodríguez and Queralt Casas; Alba Torrens and María Conde will cover the position of forwards; Paula Ginzo, María Araújo and Irati Etxarri have been selected as power forwards; and Raquel Carrera, Astou Ndour, Lola Pendande and Nerea Hermosa will be the centers.

On the other hand, players such as Valencia Basket point guard Cristina Ouviña, center Laura Gil or Movistar Estudiantes forward Laura Quevedo will be left out due to physical problems.

The group will meet on Tuesday May 24 in Madrid and will leave for Melilla on May 25, where they will play friendly matches against Italy (June 1) and Belgium (June 3). On June 10, the team will meet again for a week of training in Guadalajara that will end on June 17, when it will leave for Cividale del Friuli to participate in the Italy tournament against Slovenia (June 18) and the hosts (June 19). June).

Méndez stressed the importance of this concentration, in which he will try to "finish landing in this team." "Precisely, because of the little time we had in November, we will also work to try to be as prepared as possible for the next 'window' in November, where we will have a very important game, against Hungary, which will qualify for EuroBasket 2023. ", he stated.

"This has been a very tough season for players and coaches, long and with many health problems, but, despite this physical and mental fatigue, I am sure that we will do a good job and be as well prepared as possible for that next season. window. I invite you to be with the team, with these players who deserve everything and to be part of the effort and the result that we hope to achieve in November with these players", she continued.

For his part, the president of the Spanish Basketball Federation (FEB), Jorge Garbajosa, explained that they are "very optimistic" about what this summer may mean "for the future." "We have set up two meetings with a clear objective, to build a team that will compete for everything in the coming years, as we have done so far," he stressed.

In this sense, he assured that they will seek to "build a solid team" that maintains "the values ​​of 'La Familia'" and the "competitiveness and grit" that has always "differentiated them from other countries." "And we will do it with the experience of players who have been on the podium for years, such as Silvia Domínguez, Astou Ndour or Alba Torrens, and the enthusiasm of other young women who over the last few seasons have shown us that we have to trust them, such as María Conde, Maite Cazorla, Raquel Carrera or Irati Etxarri", he concluded.

1 Tenants forced to endure second-hand smoke from neighbors 2 "Social networks have rewritten the Marcos dictatorship... 3 The AVT asks the US for explanations for removing... 4 The former 'controller' of Iberdrola insists... 5 Citizens demand that Sánchez defend the Monarchy... 6 "I want to die": this young couple played... 7 The emir of Qatar begins a visit of a marked economic... 8 Shanghai announces that it will overcome the Covid,... 9 The victim of the Malagueta perceived that the detainees... 10 The law will include a leave for recovery after an... 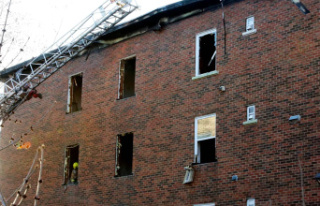