Even if he lost his sight after a long hospitalization where he almost lost his life, Roch Derome poses the same look as before his terrible bad luck on the international pee-wee hockey tournament in Quebec. 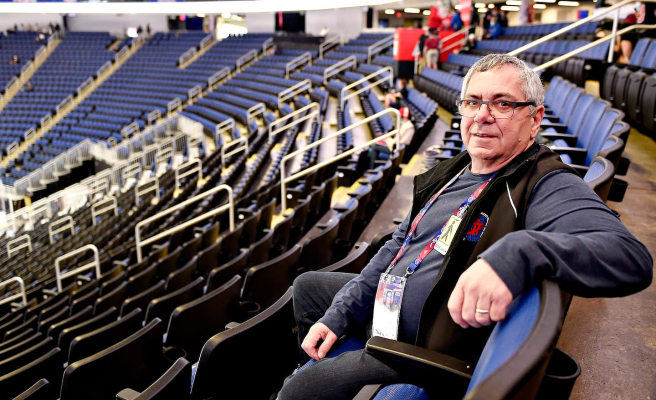 Even if he lost his sight after a long hospitalization where he almost lost his life, Roch Derome poses the same look as before his terrible bad luck on the international pee-wee hockey tournament in Quebec. "It's my joy," proclaims the unwavering volunteer, who is reuniting with his second family after a forced break of more than two years.

At the Videotron Centre, behind hundreds of young people who dedicate themselves on the ice to practice their favorite sport, volunteers work like every year like little ants to ensure that everything runs smoothly.

Among this sympathetic shadow army, Roch Derome, who has been overseeing accreditations since 2001, exchanges jokes this week with his accomplices and shines.

Yet, on a gloomy Friday, December 13, 2019, the comforting feelings he's relishing in this moment seemed a long way off.

It was a week before his deserved retirement as an equipment technician. He was finally going to be able to indulge in motorcycling as much as he wanted with his wife Lise. Enjoying her two children and three grandchildren. Take the time to take the time. And of course, getting even more involved in his other passion, the pee-wee tournament. Fate struck a few steps from the finish line.

Between life and death

During the night, victim of a serious infection, Mr. Derome was rushed to Saint-François d'Assise hospital.

"The last thing I remember is that the paramedic who was in the back of the vehicle with me said to the driver: hurry up, we're going to lose him," he said.

Quickly moved to the operating room, he regained consciousness to say to his relatives "See you later".

When doctors found that his internal organs were no longer working, his family were told a few times that he might not be staying overnight. It was only after five weeks that he woke up, after being transferred to the Enfant-Jésus hospital.

Despite appearances, his time had not come.

"When I regained consciousness, I said I couldn't see anything. The ophthalmologist came and saw that my optic nerves had run out of oxygen and had been damaged,” says Derome.

Result: he no longer sees at all in his left eye and has retained 5% of his vision in his right eye.

"Just straight ahead, like I'm looking through a straw," he clarifies.

Despite everything, it only takes a few minutes with him to realize that he was never going to feel sorry for himself.

"I think I've had my sight for 65 years, it's already beautiful. You have to live with it. I didn't want to curl up in a corner bawling. My wife told me we would get through it together,” the fighter said.

Nerves in the feet were also affected and six weeks of rehabilitation to relearn how to walk were necessary.

During all this painful period, it was also to his second family, that of the pee-wee tournament, that Roch Derome clung to.

"The thing that bothered me was the tournament. This is the event that I loved the most in the world. This tournament is my joy, it's a family," he said.

Moreover, to prove that it is much more than a simple cliché, the first visitor who went to Mr. Derome's bedside after his immediate family was the general manager of the tournament, Patrick Dom.

"I wasn't conscious, but when I was told this, I was touched. That says everything. I always felt valued at the tournament. I absolutely wanted to come back this year,” he added, choking with emotion.

Catching his breath, Roch Derome manages to explain what comes to get him to this point in this incomparable tournament.

“It brings a good mood to young people. For many, it's one of the best moments in their life to play in such a big arena. Contributing to this is just wonderful. »

Yes, off the ice, it's also all that, the Quebec pee-wee tournament.

1 Heat advance to conference final 2 A young man could no longer walk after shooting in... 3 The Lightning resist the Leafs 4 Ryan McDonagh: the stabilizing element 5 Google introduces a new immersive view for its Maps... 6 Government strategy: Quebec is betting big on young... 7 Gun violence: Police chiefs want tougher sentences 8 Heavy fine for illegally taking fossils 9 The escalation of violence detailed in court 10 The shortage of hypoallergenic baby milk is made widespread 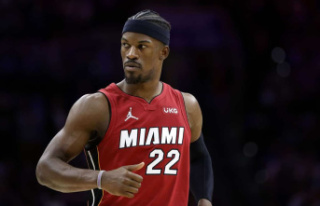