The President of the Government, Pedro Sánchez, has announced that the Council of Ministers this Tuesday will approve an additional investment of 1,238 million euros to "dignify" Vocational Training (FP), of which around 860 million will go to training of workers and companies and another 392 to increase the number of places, improve classrooms or promote the internationalization of students. 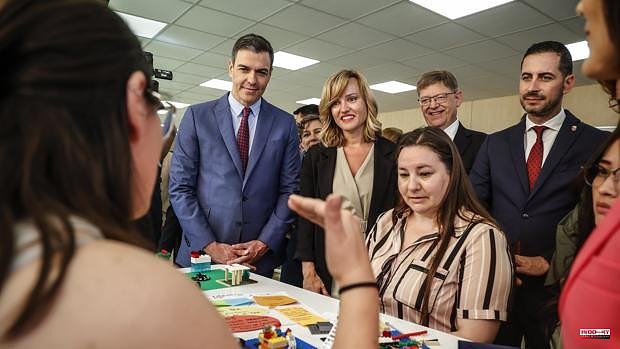 The President of the Government, Pedro Sánchez, has announced that the Council of Ministers this Tuesday will approve an additional investment of 1,238 million euros to "dignify" Vocational Training (FP), of which around 860 million will go to training of workers and companies and another 392 to increase the number of places, improve classrooms or promote the internationalization of students.

"In short, we are talking about a country's commitment," said Sánchez in a brief statement without questions after a visit to the Public Integrated Center for Vocational Training (CIFP) in Mislata (Valencia) together with the Minister of Education and Vocational Training, Pilar Alegría, the president of the Generalitat, Ximo Puig, and the mayor of this Valencian town, Carlos Fernández Bielsa, among other authorities.

Sánchez, who has heard some experiences of the students of the center, has highlighted the Government's commitment to VET in the last four years and has pointed to intergenerational inequality as a "pending challenge" in Spain.

"We are committed to Vocational Training because we believe in and want the best future for our children", he has said, and has even assured that "in many years, when I look back", the "dignification" of VT will be achievements of which you are most proud as president.

In this regard, Sánchez has highlighted the "decisive commitment" of the Executive that, "over these years, will allocate 5,500 million euros to FP." "We believe and want the best of futures for our children," he stressed.

In addition, it has marked a "pending challenge" that society has, which is to "reduce all the gaps that the different crises have left, and probably the most bloody is that of intergenerational inequality, the precariousness suffered by our children, the lack of opportunities for young people or difficulties to emancipate themselves».

Thus, Pedro Sánchez has precisely stressed the importance of combating inequality, which is "society's main challenge" and is especially suffered by young people, as well as job insecurity and the "high" unemployment rates that Spain has in this population sector, in comparison with the rest of the European countries.

In fact, he has pointed out that intergenerational inequality is "one of the pending issues to be resolved." "We are talking about building a society where equal opportunities are guaranteed," she stressed, while claiming the "commitments" of the Government of Spain with vocational training.

Thus, it has valued the advances of the Executive in this sense, among them the new educational law in which "we change the pedagogical methods with which it is taught" or the "never seen" item of scholarships in the General Budgets of the State of 2,000 million euros for families with fewer resources.

“If we think about what the labor horizon is in a very few years, Spain is going to need 50 percent of intermediately qualified people, and now we are over 20%, so we would have to double in a very short time to to be able to deal with all the supply that the company is going to provide in terms of workforce for our young people”, he expressed.

At this point, he highlighted the "dialogue" with social agents and unions that resulted last March in the "milestone" of a new FP law, which is the regulatory framework in which a " extraordinary opportunity” with two “very important” concepts: “the employability of young people and intellectual training”.

Pedro Sánchez has stressed that the new norm had "practically all parliamentary consensus", as well as the agreement of the educational community and social agents. "And we are very proud of it", he confessed, while stressing that this law clarifies the access of VT to undergraduate training and gives it "that international characteristic".

For his part, the president of the Generalitat, Ximo Puig, shared with Sánchez the "great common project and the country's commitment" that is VT, defended the need for a "great alignment" in this regard and stressed that Vocational Training "is not the pending subject, but the future of this country".

The head of the Consell has defended that the Government of Spain has taken a "great step forward" with the FP law and has highlighted that it is precisely there that "a large part of the success of our future lies", for which he has opted for "knowing how to take advantage of well this decade of opportunity. "VET is filling a fundamental gap between the labor market and job demands," he stressed.

On this matter, Puig has highlighted that the Generalitat Valenciana has "multiplied the places" of FP, with 30% more, and next year 5,700 positions will be created, to "continue strengthening the center system", which is "working well" . Six more integrated centers will also be built, in Alicante, Elche, Castelló, Dénia and two in Sagunt.

Finally, it has announced the expansion of the Integrated Public Vocational Training Center (CIFP) in Mislata, with an investment of five million euros, which represents "a recognition of a job well done." "The Generalitat and the State are going to be working together there," he added.

The Mislata Public Integrated Vocational Training Center exclusively offers FP studies and its training offer is made up of six professional families: Computer Science and Communications, Health, Tourism, Business Administration, Commerce and Marketing, and the advanced training cycle of Optics of the Mechanical Manufacturing family.

The expansion of the center is planned, which will make it possible to complete the range of training cycles given that it is planned to teach assistant management, sales management and commercial spaces, marketing and advertising, guide, tourist information and assistance, prosthetic audiology, documentation and health administration, Orthoprosthesis and support product, and Radiotherapy and dosimetry.

In the same way, the spaces to offer professional certificates will be expanded and, in this way, continue improving the labor insertion of the center's students, which currently reaches 80%.

1 2022 TV license fee: removed by Macron? 2 The talks for the 50th anniversary of Prada a Tope... 3 Food voucher: new help before summer? For who ? 4 Sweden and Finland joining NATO not a threat, but... 5 Maragall defends that Colau benefited from espionage... 6 Mileage scale 2022: how to pay less tax with actual... 7 The subsidiary of CF Talavera promotes to Third RFEF 8 Prime Macron 2022: it should triple! Amount and date... 9 2022 tax return date: online and paper, check the... 10 Cannes Film Festival: the stars expected on the red... 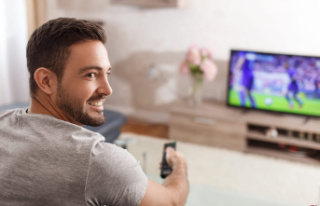