Pascual promotes the generational change in the countryside of Castilla y León with the delivery of scholarships to children of ranchers, with the aim of helping to stop the abandonment of livestock and agricultural holdings in the Community. 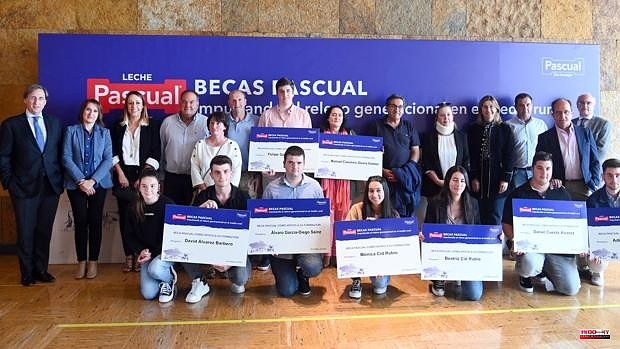 Pascual promotes the generational change in the countryside of Castilla y León with the delivery of scholarships to children of ranchers, with the aim of helping to stop the abandonment of livestock and agricultural holdings in the Community. On a national scale, a total of 12 students will benefit from this aid, of which four belong to Castilla y León, two from Palencia and another two from Zamora.

The Pascual Quality factory located in Aranda de Duero (Burgos) hosted this Tuesday the award ceremony for the I scholarships to students and children of ranchers, which was attended by the Minister of Education, Rocío Lucas, the president of Pascual, Tomás Pascual, as well as some of the students in charge of receiving this scholarship, along with their parents.

As explained by Pascual, this private initiative was born with the idea of ​​fighting depopulation in rural areas, through a scholarship program for the children of ranchers and farmers, and thus promoting generational change in local farms.

In this way, through these scholarships, the company finances the studies of those young ranchers in disciplines linked to the primary sector. "This initiative is the last step we are taking to ensure that young people continue on the farms," ​​explained Pascual's Agro Purchasing Director, Joaquín Lorenzo. These scholarships will allow these students to continue studying a career that will later help them continue with the family business.

"Our intention is to provide continuity and scope to this program, so that it is repeated in each academic year, expanding it in future editions to young local farmers," he pointed out.

These scholarships for regulated education are complemented by a high-performance training plan, taught by Pascual, to instruct these young people once they join the family businesses. "When you join the farm, you will have an individualized plan and multidisciplinary training with high-level technicians in the main lines that you need to know," he explained, addressing the students. This training includes areas such as sustainability, environment, reproduction, food safety or business management.

As Joaquín Lorenzo explains, “companies in the agri-food sector have to take the initiative and begin to provide solutions to guarantee the continuity of livestock and agricultural operations in Castilla y León. Rural economies need both the sector and the Public Administration to promote resources to promote the agri-food industry, which is a fundamental element for structuring the territory and establishing the population in rural areas». Likewise, he transfers to young people the importance of "dignifying the profession much more", a "pending task" of the livestock sector.

According to data from the Ministry of Agriculture, Fisheries and Food, the percentage of holders of an agricultural or livestock farm under 40 years of age is only 8.6 percent, a figure that drops to 7.73 percent in the case of Castile and León. «The phenomenon of depopulation is not only a disaster for the economy and for the balance between rural and urban areas, but it is also a serious environmental problem. Ultimately, a weaker primary sector implies less local and proximity production, therefore, greater imports and a greater carbon footprint of the supply chain, not to mention the dependence on third countries in a strategic sector such as of food. On the other hand, the abandonment of rural ecosystems and crops also implies the degradation of our land, fields and forests, which will have less capacity to absorb CO2”, says Lorenzo.

“The future of companies lies with those who come after us, those who have to help us face increasingly complex challenges. If you are exemplary it is because your parents are too. You have a promising future, because there are tremendous opportunities. You are the origin of a journey that begins in your home and reaches the tables of all Spaniards, both in their homes and outside of them. In your work, rests the future of this company, and in your hands rests the future of the Spanish countryside », has completed the president of Pascual, Tomás Pascual, in his words to the scholarship students.

For her part, during her speech, the Minister of Education, Rocío Lucas, valued this initiative, since it not only "improves the company and the sector", but also the society of Castilla y León. "Education intends that," she added. In this line, she has congratulated Pascual for this private initiative and assures that the Board will take ideas and help in "whatever", but she remembers that it is a "private initiative".

1 The PSC yields and agrees with ERC and Junts that... 2 Medina Cantalejo now shows his chest: "The VAR... 3 PSG: the arrival of Luis Campos formalized at the... 4 The Bank of Spain points to fiscal policy as a key... 5 Roland-Garros: Rublev's anger came close to disqualification 6 14 years in prison for the Rontegui slaughterer 7 Audiovisual works: agreement to remunerate authors... 8 Roland-Garros: tennis legends pay tribute to Tsonga 9 Roland-Garros: the immense emotion of Tsonga on his... 10 Geoxia, owner of Maisons Phénix, placed in receivership 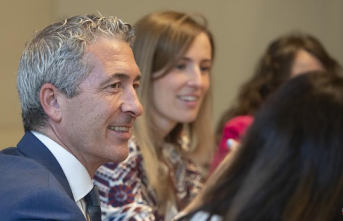 The PSC yields and agrees with ERC and Junts that...