We arrived at the parish of Nuestra Señora del Tránsito, Carretera de Canillas, 40, one could say that in the historic Poblado de Canillas. 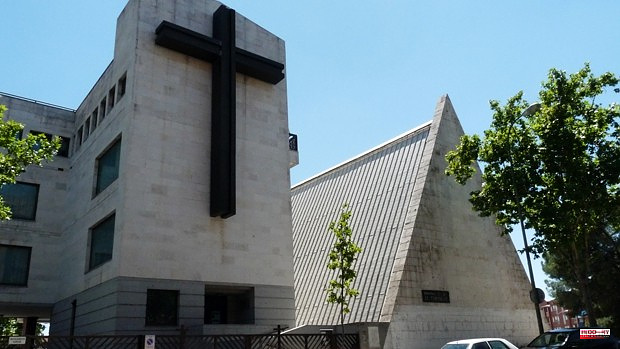 We arrived at the parish of Nuestra Señora del Tránsito, Carretera de Canillas, 40, one could say that in the historic Poblado de Canillas. We arrive, therefore, at the most emblematic temple of the architect Luis Cubillo de Arteaga. As Jesús García Herrero affirms in his study, «the parish of Nuestra Señora del Tránsito is the best-known and reviewed sacred building of Luis Cubillo. Contemporary with his projects for the General Directorate of Ecclesiastical Affairs, the church was the first completely modern religious building in Cubillo, provocatively groundbreaking according to Miguel Lasso de la Vega, after the trial that the Purification of Our Lady parish in San Fernando de Henares».

The preliminary project for the temple was carried out in 1958 at the initiative of Julián Laguna, then head of the Madrid Urban Development Police Station.

The final project was drawn up in 1961. On August 15, 1965 it was erected as a parish and began its life of presence in a neighborhood that had evolved from the town that gives air to the big city to the home of the immigration of the sixties and seventy.

But let us return to the singular architecture that, according to the aforementioned study, assumes «Nordic models, mainly by Saarinen and Jacobsen, and the knowledge of the latest German liturgical trends, confirm the avant-garde value of the Canillas church in the field of religious architecture Spanish. The formal singularity of the building meant that the usual collaboration with avant-garde artists took on an unusual importance in this case. Inside, with a markedly industrial character, José Luis Sánchez created a Romanesque-inspired Christ, while the stained glass windows and drawings by Arcadio Blasco, still in a figurative key, occupied all the vertical planes».

The current parish priest of Nuestra Señora del Tránsito, the priest Antonio Fernández Montaña, an example of attention and service, explains that the model of the religious architecture proposal is based on the biblical and liturgical movement that developed in France and Germany in the years prior to the Second Vatican Council and which made the conciliar renewal possible. Temple theology refers to the biblical Tent of Meeting, the place where God dwells, his holy presence. Not surprisingly, there are translations of the Gospel of Saint John that affect this dimension, saying that “the Word became flesh and pitched his tent among us”, according to the literal translation.

In fact, the presence of the Communities of the Neocatechumenal Way, their theological and liturgical imprint, reinforce this continuity of the application of the authentic reform of the Second Vatican Council in terms of interior design and the itinerary that is established between birth through baptism, engendered within the mother Church, the baptistery, the table of the Eucharistic banquet, of the agape, and the seat, the presidency of the Community. It should be noted that the frontispiece is an original painting by Kiko Argüello, initiator of the Neocatechumenal Way, a path of Christian initiation.

Another curiosity of this temple is the large stained glass window at the entrance which, although it looks like a pantocrator, is not. It is the representation of King Frenando III the saint, with the sword and the crown of imperial aspiration. Originally it was thought to name the parish San Fernando, after the nearby town of San Fernando, but since there was already one with that name, given that the parish priest was a native of Zamora, he gave it the name of Nuestra Señora del Tránsito.

It should be noted that the main access to the temple is through a beautiful and well-kept square that presides over the image of the Virgin of the Third Millennium. A delight of intersection space between the pleasing and the profane, between the Kingdom and the world. On the other side of the temple is the Catechumen, an impressive building that has a cross on the outside front. The architectural complex was blessed on September 14, 2016 by Cardinal Rouco Varela.

The priests Gabriel Gil and Pablo Javier Lombardero accompany the parish priest in his day-to-day work. New Communities walk in this parish, of which two, a fusion of four, have already completed the Camino. One of the most relevant pastoral incidences is the relationship between the catechesis of Christian initiation –communion- and the liturgy of the Sunday Eucharist. The Eucharist as the culmination of the learning process of life, of the Christian experience. In the children's mass, the music and the altar service with a large group of altar boys and girls should be highlighted. Another of the singularities of the parish is the Adoration with the Blessed Sacrament according to the form that Santiago Fusté has introduced, an Adoration that is not only Exposition, but is life made love before Love.

As it could not be less, Cáritas is one of the bastions of the parish. He serves over a hundred families. They work in this action, which is always evangelizing, of announcement, a group of volunteers, among whom is a conceptionist nun, and a social worker.

The life of this parish is a manifestation of the presence of Jesus Christ, who placed the tent of his humanity and his divinity among us.

1 Regional houses: the small homeland beyond the terroir 2 Madrid, shielded by the NATO summit: street closures,... 3 Solar nutricosmetics, in which cases is it recommended? 4 Nadeem Siraj, chef of Indian cuisine: «Having the... 5 The UN denounces that Maduro continues with the torture... 6 They demand from the Cuban regime a life certificate... 7 NATO Summit: the agenda of the 48 hours that will... 8 At least two dead and several injured in a shooting... 9 A couple drowns in the waters of Lloret de Mar 10 Free shows for everyone in more than a hundred municipalities... 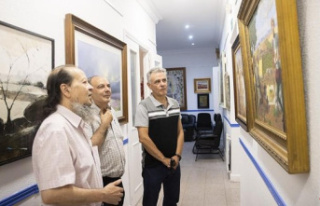