Vox has sent this Wednesday a message with exclamations to the media to warn that the intervention of its general secretary of the parliamentary group, Macarena Olona, ​​in the Congress of Deputies was the last. 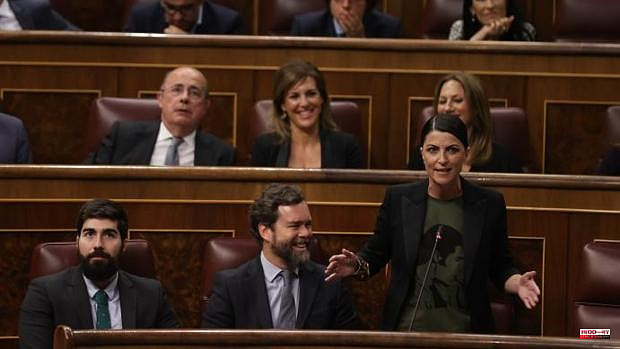 Vox has sent this Wednesday a message with exclamations to the media to warn that the intervention of its general secretary of the parliamentary group, Macarena Olona, ​​in the Congress of Deputies was the last. She will leave her deputy act before June 3 to "dedicate herself to Andalusia in body and soul." The candidate to preside over the Junta de Andalucía thus took advantage of a question to the Minister of the Presidency, Félix Bolaños, to attack the PSOE.

«Candidate for the presidency of Andalusia and a resident of Salobreña -Olona has claimed, and some laughter has been heard in the background-, despite her plan to make my candidacy illegal by removing me from the register». The deputy for Granada, who is not Andalusian, has imitated from her seat an alleged call by Bolaños to the mayor of Salobreña, María Eugenia Rufino, to illustrate how the socialists tried -according to her- to prevent her from standing in the elections for 19-J.

Bolaños has asked him to stop "the overacting, the theater, the lies, the insults and the forced smile", because, in the minister's opinion, "his interventions are more grotesque every day". And as Olona had called him "parsley minister" for "being in all the sauces"; he answered with another spice: "It repeats itself more than garlic."

The Justice endorsed Olona's candidacy last week. But Bolaños insists on the "trap like a house" of the Vox leader: "You neither live nor have lived in Salobreña in your life, the first procedure to stand for elections is a trap. What can Andalusians expect from Vox? (...) He has no scruples or moral or ethical limits». The minister added that he will regret not debating more with her because he is just in politics to combat "what she represents: hatred, tension, bullying, privileges."

A pim pam pum. A mini electoral rally from which she will soon cease to be a national deputy for Vox. «It was a cacidada of the PSOE»; Olona has denounced; «She called her directly from La Moncloa and María Eugenia pulled ahead and removed me from the register».

A part of the session of control to the Government of this Wednesday. Without the President of the Government, Pedro Sánchez, who is participating in the World Economic Forum, in Davos. Tomorrow he will return to Spain. And she will appear in a monographic plenary session on espionage against independentistas and members of the Executive with the Pegasus system. The groups insist that not enough explanations have been given and they do not trust that the president will give them tomorrow.

The Vox deputy, Ignacio Gil Lázaro, today asked the Defense Minister, Margarita Robles, if she considers that the center's staff feels defended after handing over the head of director Paz Esteban to the independentistas to "save her position of minister». "At the CNI they feel betrayed, it has caused a very serious and unfair reputational damage," said Gil Lázaro. Robles has responded that she always defends the work of the CNI workers: "I feel very proud of them (...) Respect for those who risk their lives every day, do not come here with a tense speech."

From the other side of the political spectrum, Míriam Nogueras, from Junts, asked the Minister of the Interior, Fernándo Grande-Marlaska, what program his department uses "to spy on opponents" and added that he still has not presented "a single proof that the sewers of the State do not exist». Marlaska has defended that "Spain is a full democracy" and that "ideas or thoughts are not persecuted."

The PSOE and the PP knocked down yesterday in the Board of Spokespersons the creation of an investigation commission of the "sewers of the State" that United We Can and Sánchez's parliamentary allies had registered. United We Can not only hold the Minister of Defense responsible, but also seek to supervise the Ministry of the Interior. The president explained last week that "the sewers" are part of other times, in relation to PP governments, but his associates do not give credibility to his words and suggest that vigilante cells could continue to be active.

1 Controversy in the Barça with the renewal of Gavi 2 Salvador Ramos, the Texas attacker: a former student... 3 Ligue 1: the League now allows numbers up to 99 4 They arrest a woman for mistreating and causing several... 5 Arrested in Ávila in possession of videos and photos... 6 Barcelona will dedicate a square to Ukraine 7 A former director of Caritas, the new ‘plumber’... 8 Sailing: “It has rarely been so hard”… Tom Laperche... 9 United States: who is Salvador Ramos, the murderer... 10 Dueñas calls to combat “negativity about meat consumption” 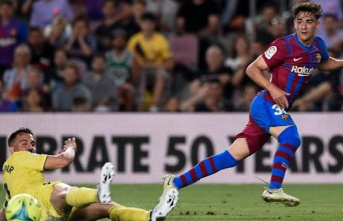 Controversy in the Barça with the renewal of Gavi