Olena Zelenska, Ukrainian first lady: "No one separates me from my husband, not even the war"

In recent weeks, the first lady of Ukraine, Olena Zelenska, has given several interviews to international media to talk about the situation her family is going through after the invasion of Russia; For her part, her husband, Volodymyr Zelensky, has not stopped making public appearances, in the media and at events, whenever he has had the opportunity to claim help for Ukraine. 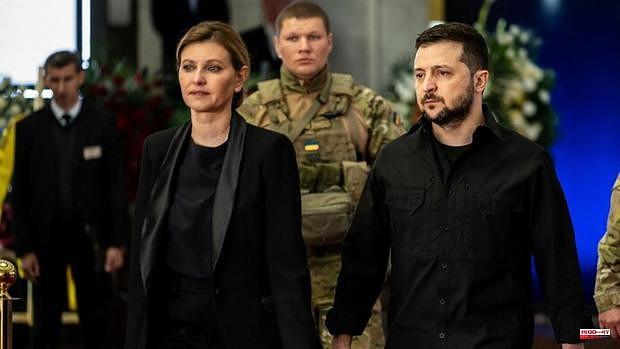 In recent weeks, the first lady of Ukraine, Olena Zelenska, has given several interviews to international media to talk about the situation her family is going through after the invasion of Russia; For her part, her husband, Volodymyr Zelensky, has not stopped making public appearances, in the media and at events, whenever he has had the opportunity to claim help for Ukraine. However, what was not so common was the joint appearance of the marriage in an interview, like the one that has been broadcast this weekend, and that has been widely collected.

In this interview, granted to the Ukrainian television network ICTV, the couple confesses that the Russian invasion of Ukraine has "shattered" their family, as well as millions of homes across the country.

"Our family was torn apart, like any other Ukrainian family," Zelenska said. Since the war began, the first lady, along with her two children, has taken refuge in an unknown place, staying away, at least physically, from her husband, with whom, however, she has been in contact by phone: "He lives at your job. We didn't see him at all for two and a half months." Zelenska categorically denied that this meant the war had taken her husband from her, as one of her interviewers suggested. "No one takes my husband away from me, not even the war," Zelenska said, according to media such as 'The Washington Post' or the BBC.

The interview was the second time the couple, who married in 2003, have appeared together since the Russian invasion on February 24. During the meeting, around a table, Zelenska said that she was "grateful" for their joint appearance on television because it meant that they could finally spend time together. "A date on TV, thanks," she joked.

In the first days of the war, President Zelensky was already aware that he was Russia's "Target Number 1" and that his family was "Target Number 2", hence extreme precautions were taken to protect his wife. and their children.

Asked how she remembered the first moments of this war, Zelenska said that she woke up to "strange noises" when Russia began its invasion and that she noticed that her husband was not by her side. Zelensky was already awake and in the next room, putting on a suit. "He has begun," she recalls her saying to him before leaving, words that she says left her in a state of "anxiety and stupor."

The war has raised the profile of Ukraine's president, who has delivered video addresses to Ukrainians most nights and addressed parliaments around the world. He has virtually appeared at events ranging from the Grammys to the Cannes Film Festival that opened last week.

Zelenska, 44, is a screenwriter and has rarely been seen in public since the Russian invasion. She was first seen in early May, as Ukraine celebrated Mother's Day, meeting in the west of the country with US First Lady Jill Biden, who had crossed the border from Slovakia.

Zelensky and his wife made their television appearance as Russia struggled to recover in Ukraine after suffering huge losses. Prospects for victory are rapidly dimming for Vladimir Putin's troops, despite early predictions that Moscow would sweep to victory largely unopposed, The Washington Post reported.

"We broke the back of the largest or one of the strongest armies in the world," Zelensky told interviewers.

During the hour-long interview, Zelenska expressed her hope that, after the war is over, she can return to focusing on issues affecting Ukrainian women, such as pay inequality. "After the victory, we will remember the heroism of our Ukrainian women," she said.

1 The legalization of repression in Cuba 2 The Government of Peru apologizes for the 1985 Accomarca... 3 The Government maneuvers to save the public pension... 4 The list of Spanish businessmen and politicians who... 5 The warning from the Bank of Spain so that the Treasury... 6 Rakuten challenges Amazon and launches a 30% cash... 7 Lagarde points to July for the first rate hike and... 8 Two out of three self-employed plan to raise their... 9 1,000 waiters and cooks are sought for the summer... 10 Brussels warns Spain of the end of the free spending... 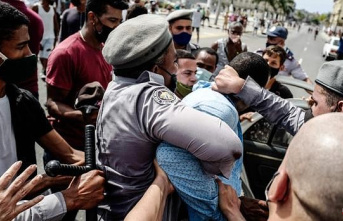 The legalization of repression in Cuba