Oleksiy Symonov, the Moses of Mariupol who saved 117 people from the beleaguered city

Oleksiy Symonov, the Moses of Mariúpol, is disturbed by the nickname with which he has been baptized, although he appreciates "the dignity that it conveys about the situation" in the martyr city. 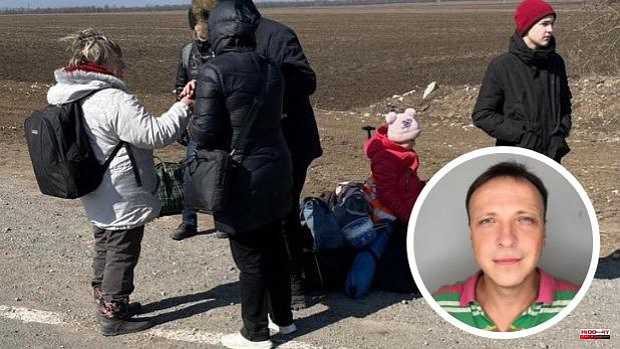 Oleksiy Symonov, the Moses of Mariúpol, is disturbed by the nickname with which he has been baptized, although he appreciates "the dignity that it conveys about the situation" in the martyr city. In reality, the nickname graphically portrays his feat, guiding on foot for 12 hours through a desert of asphalt and shrapnel 117 people who managed to escape hell alive, including thirty children accompanied by pets in a desperate procession towards a safe place. The idea of ​​calling him the Moses of Mariúpol arose from his friends when he told them about his risky escape. "Instead of Symonov you are Symoisés," they said, and Oleksander laughed as he does now in a telephone conversation from Yaremche, in the province of Ivano-Frankivsk, where he has taken refuge with his family after surviving hell for a month, remembering the weeks in which his world and his city disintegrated under Russian fire.

“The first two days of the war we thought that everything would end soon, that someone would negotiate with the Russians, but when we discovered the reality it was too late to try to get out. We had been trapped in the city, the Russian columns were approaching from all sides and soon it was too dangerous to try to flee, ”explains this 44-year-old organizer of events and jury in national and international sports competitions. "Some friends suggested that we take refuge in a sports facility that had a large subway, in my neighborhood, Kalmius, and I moved there with my wife and my three children, aged between seven and 14 years." Little by little, other neighbors who, like them, lacked a safe place, approached the place and they made space for them until they created a true community. «On average, we were 280 people although some left and others arrived. I estimate that about a thousand people passed through there, "says Oleksiy. Among them, fifty children and between 40 and 50 elderly and several people with disabilities.

The problem, at first, was the danger of artillery, aviation and mortar bombardments, but ten days after the start of the war the cut off of supplies forced them to change their habits. “To collect water, we men walked the streets in shifts looking for sources, although we also collected rainwater and melted snow to boil it, burning firewood. The priority was cooking for the children. Nobody wanted to get sick and a single sick person could cause an epidemic, so we took great care of the food. We made soups and pasta, hot dishes, since in February and March the temperatures were freezing. Many people were hardly hungry, almost fed on hot tea. Not one day did we stop eating because of the war », he recounts. “Another problem was finding firewood. At first we paid a man who bought an electric saw and brought us logs that he cut himself, but days later, when the shelling intensified, it stopped being a problem because the bombs felled trees and all you had to do was go out and cut branches.”

The shelter was bombed four times. “Six bombs fell in the vicinity. We were protected by the underground, but there were deaths and injuries in the buildings around us. Other people simply died of disease because there was no possibility of taking them to hospitals. The craters surrounded the entrances, and since I was in charge of the shelter I was in charge of the most dangerous tasks. Once, an aerial bombardment hit the shelter: I was outside, far enough away that it didn't kill me, but the blast wave blew up everything around me. Shrapnel hit me in the head, and a door shot out and hit me, concussing me badly, but I was lucky. People took care of me very quickly, they bandaged me and I think I will not have any problems in the future”, explains Oleksiy. “On another occasion, we were cooking outside when there was an artillery attack. I was protected, without wanting it, by another man who was close to me: the splinters stuck in his leg. He also survived ».

Keeping the children busy was another priority. “In the beginning, until the electricity supply was interrupted, they used the sports facilities to train and let off steam, but when the power went out, everything changed. They played with the pets and with each other, with flashlights. I gave them a mission: to hug and encourage their parents to avoid panic attacks.

There was no one to ask for help. “We went to the police, who were overwhelmed. We helped them search for the missing as best we could, but in those days there weren't as many survivors to rescue as there were corpses to collect. The soldiers gave us medicine even though they desperately needed it, they gave us what they could."

On March 16, the bombing of the Mariúpol Theater, marked with the word "children" on both sides, shocked the city and the entire country. Oleksiy realized that the chances of dying in the encirclement were too high and he became desperate to find an escape route at a time when there were no humanitarian corridors. The opportunity arose on March 20, when Russian positions concentrated their attacks on other districts of Mariupol and the shelling eased in his neighborhood. The community that depended on Oleksiy did not have any means of transportation, but the Moses of Mariupol decided that this should not stop them.

«On March 21 we examined the exits of the neighborhood, and on the 22 we decided to leave. The temperatures had started to rise and we no longer worried about freezing on the march, as we feared being forced to spend the night in the open." That night, Symonov decided to speak to the community about him, already converted into a kind of family whom he could not leave behind. "I explained to them that I believed there was a chance of getting out alive, but I didn't try to convince anyone. A hundred people freely joined the initiative. At dawn, only 80 were ready, but when they left the shelter with their bags and began to walk, another 37 people joined them, creating a human column. “There were so many of us that we were very visible, but at the time the Russian soldiers pretended to be freeing us and no one shot at us. We began to walk without pause, without looking back. We did not carry white flags, nor were we identified because we believed that this could be interpreted as a provocation by either side. We put on orange life-saving vests so they knew we weren't military." Among them were 30 children, the youngest five years old, and elderly people. The oldest man was 70 years old. "He was very risky because there was shelling, but not close enough that we felt in imminent danger."

Thus they passed through the streets littered with corpses and destruction of Mariupol, without looking back or being distracted by the hellish vision that loomed before them. “The streets had been flattened by artillery, air strikes and mortars. We saw the soldiers only when we were leaving the city. Our district was simply flattened, destroyed by artillery,” he recalls. The first journey, seven kilometers, took them six hours, from Mariupol to Mangush, but the evacuation buses they expected to find there were not there. They then traveled another 15 kilometers for seven hours until they reached Komyshuvate, "with dogs, cats and other pets". “Nobody slowed down, not even the children. No one complained about being tired. Sometimes I told them that we could walk more slowly because the explosions were heard in the distance, but they refused to do so, such was the desire to get away from there and get to safety. No one was afraid of running away, they were afraid of staying under the bombs».

They arrived just ten minutes before the only store closed, where they were able to stock up on drinking water and food. Knowing where they came from, the neighbors organized to shelter them in their homes. In Komyshuvate they were able to contact volunteers who organized their evacuation through the countryside, by vehicles or on foot. When they arrived in Zaporizhia, throughout their march they had passed more than 15 'checkpoints'. “It was like touring all of Russia. There were Udmurt soldiers, Kazakhs, Chechens, the entire spectrum of the population from Sakhalin to Yakutia.' The Moses of Mariupol emphasizes that they treated him professionally. “They followed orders: they checked phones and documentation and looked for tattoos”, except in the last posts controlled by rude pro-Russian local militiamen. One person in his convoy was picked up by the Russians and never heard from again.

Three of his fellow odyssey contacted by this newspaper have only good words for Oleksiy, who attributes his cool-headedness to crisis management training and the "disaster movies" he used to watch with his children before the war. Symonov remembers that many other civilians are still trapped. Every day new images of corpses appear under the rubble in a city turned into a huge cemetery. "Remember that there are 100,000 people there, and as long as they are alive, Mariupol is not finished. They need help".

1 Hitmen in the pay of sex trafficking mafias: "If... 2 The bull and the bullfighter who turned the Gran Vía... 3 This is how you buy a dream villa for 300,000 euros 4 Buying houses with cryptocurrencies is still a plot 5 Shared cars just for them 6 'Vtubers', the new phenomena of social networks... 7 I have a connected tractor: innovation leaves its... 8 The new brilliance of self-consumption dazzles foreign... 9 A key trident in the new economy is threatened by... 10 Technological endpoint of radiation at Chernobyl amid... 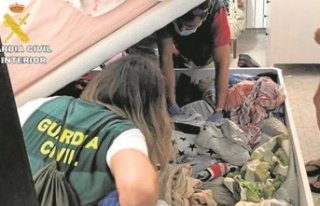 Hitmen in the pay of sex trafficking mafias: "If...