No "rock stars" at the ESC: We are (almost) all Ukrainians

In the end, as predicted weeks ago, the winner of this year's Eurovision Song Contest is Ukraine. 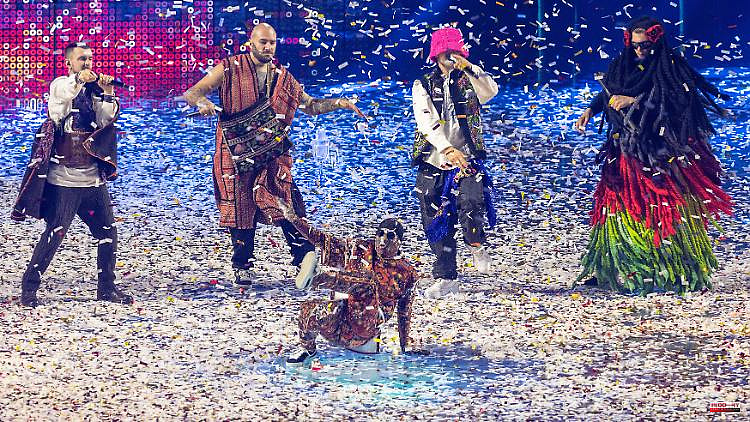 In the end, as predicted weeks ago, the winner of this year's Eurovision Song Contest is Ukraine. But it is only a half-baked sign of solidarity that is set in Turin. For Germany, on the other hand, the show turns into a disaster again. Just why?

Of course, the Eurovision Song Contest (ESC) already bears its true purpose in its name. It's a music competition where the aim is to choose the best song of the evening. And if not the one, then at least the one that gets most people in Europe (and Australia) teetering, languishing or bawling along. The ESC, on the other hand, should not be a political event per se. The host European Broadcasting Union (EBU) never tires of pointing this out. According to the rules, even "texts, speeches and gestures of a political nature" are strictly prohibited on the ESC stage.

A major European celebration without political implications is certainly a noble goal. But the cat of having a state-linked competition without any national competition has always been a biting tail. This is proven by the never-ending haggling over points between certain countries, which will not be eradicated in 2022 either, when Greece, for example, gets the predictable 12 points from the jury from Cyprus or Serbia, from the jurors from Croatia.

But the ESC has also shown in other, quite positive ways that it can be more than "just" a "song contest". For example, when a certain Conchita Wurst with a beard in an evening dress won him in 2014. The Austrian's performance at the time was strong, her song "Rise Like A Phoenix" was a hit. And yet her victory was also and above all a demonstrative sign of diversity across European national borders.

It has also been agreed for weeks that this year's ESC in Turin will make a clear commitment to solidarity - with a victory for the Kalush Orchestra formation with their song "Stefania" from the Ukraine. Something that is not provided for in the ESC regulations and is not desirable in itself. But which regulations are still relevant and enduring at a time when a brutal war of aggression is breaking all the rules that have been in force up to now? Never before has it been so understandable and legitimate to charge the "Song Contest" with a symbolic character.

The organizers have understood that to a certain extent. Not only because of Russia's inevitable exclusion from this year's ESC. At the beginning of the final, John Lennon's "Give Peace a Chance" echoed through the hall. And the interpreters were also forgiven for some delicate statements during their performances: The Icelandic formation Systur, for example, had painted the backs of their hands blue and yellow, the Lithuanian Monika Liu waved a Ukraine flag in the Green Room and Germany's ESC hope Malik Harris had it glued to the back of his guitar - with the lettering "Peace".

In the meantime, one can almost imagine how the members of some national juries were tearing their hair out: should we be guided solely by our supposed musical expertise or should we be guided by the idea of ​​solidarity? Overall, the decision was unfortunately made in favor of the first option. With 192 points, Ukraine was only fourth by the juries, while Sam Ryder and "Space Man" from Great Britain (283 points), Cornelia Jakobs and "Hold Me Closer" from Sweden (258 points) as well as Chanel and "SloMo" from Spain (231 points) dominated the top 3. The German jury could only bring itself to send 10 points to the Ukraine. On the other hand, she also awarded her "12 points" to the British.

This was not just a missed opportunity to give a really strong signal of support for Ukraine in Turin. The juries proved once again how much they ignore the actual sovereignty. Sure, the J.Lo copy from Spain was also considered by the viewers with a whopping 228 points and thus made it to third place in the overall view with 459 points. But if it was only up to the TV audience, then the mood makers would also be Zdob si Zdub

Most importantly, however, the audience's 439 points catapulted Ukraine to first place with a total of 631 points. Given the total of 40 countries voting this year, this means that Kalush Orchestra received around 11 points from each nation on average. In other words: almost the maximum number of points. The people in front of the television sets in Europe with perhaps less alleged expertise, but with empathy, sense and understanding not only saved the honor of the ESC this year. You have also made it clear that perhaps it is finally time to scrap the participation of juries in voting.

The bitter realization, of course, is that it would not have made any difference for Germany. Malik Harris and his song "Rockstars" is actually the only entry this year that didn't get a single jury point in the final. Since he was also fobbed off by the audience with only 6 points, Harris returns home with the red lantern. Germany has come last for what feels like the umpteenth time in recent years.

But it hasn't seemed so unfair for a long time. It can't really have been due to the sympathetic interpreter, his solid performance and the quite elaborate stage design in the living room design. And the song "Rockstars" is at least radio compatible. But maybe this is where the crux lies. After all, the German preliminary decision was aimed primarily at finding an ear flatterer that doesn't hurt anyone.

However, this did not arouse any real enthusiasm for the German ESC contribution - neither at home nor abroad, as it turns out. No question: A metalcore band like Eskimo Callboy (now Electric Callboy), which didn't even make it to the preliminary round, would have caused a lot more excitement in Turin. It remains to be seen whether that would have translated into a better placement. But it is definitely high time to try it out at the next opportunity.

1 Kalush Orchestra wins thanks to fans: Ukraine wins... 2 Singer does not give up her wish: Britney Spears loses... 3 "A terribly nice family": The Bundys get... 4 In autumn it should be ready: Barbara Meier is pregnant... 5 Boy or girl ?: Annemarie Eilfeld reveals the gender... 6 "What a magical moment": Fiona Erdmann has... 7 "Police call 110" in the quick check: In... 8 Good chances for Ukraine: Kalush Orchestra is the... 9 Handover of knightly orders: Prince William visits... 10 With girlfriend Nadia Ferreira: Jennifer Lopez'... 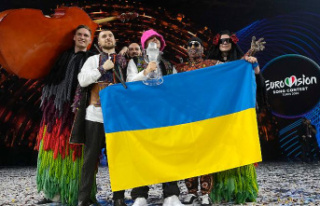