He wants to win the Euroleague on Saturday: "It's nice to have this trophy, but I still haven't managed to do the job I came for". 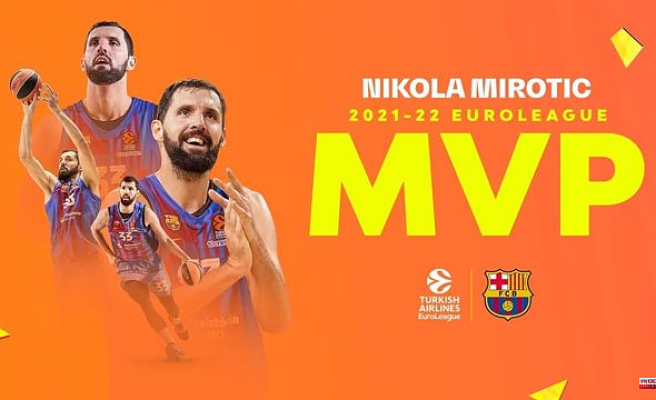 He wants to win the Euroleague on Saturday: "It's nice to have this trophy, but I still haven't managed to do the job I came for"

Barça player Nikola Mirotic has been chosen 'MVP' of the 2021-22 Euroleague, a distinction for the best player of the season that the Spanish-Montenegrin dedicated to his teammates and who wants it to be the prelude to the title, although to be in Saturday's final must first beat Real Madrid on Thursday in the semifinal of this 'Final Four' of the Euroleague in Belgrade (Serbia).

Mirotic, at 31 years old, receives the "greatest honor so far in a career full of praise", according to the Euroleague itself, at the award ceremony for the season of the highest continental competition, in Belgrade (Serbia), on the eve of the 2022 Final Four.

"It's nice to have this trophy in my hands. But I haven't achieved the work I came here for yet, and hopefully I can do it this weekend here," Mirotic said upon receiving the award, pointing to a title that the year past eluded them when they lost the grand final to Anadolu Efes.

He assured, yes, that it is a "pleasure" to receive the award from one of the great European coaches, such as Zeljko Obradovic. "Thank my team, the club, staff and teammates because this is a team effort," he said.

"A couple of weeks ago, my dear friend Nick Calathes told me that if I win the MVP to elbow him in the speech, and I will. It makes my life easier on the track. He is a great friend and partner", he contributed between laughs, including that of his coach, Sarunas Jasikevicius, present at the gala at the Stark Arena.

Mirotic remembered his first coach, and his godfather, Jadran Vujacic. "I want to dedicate a few words to my first coach, Jadran Vujacic, who is here, who encouraged me and helped me to get to this point. He was the person who believed in me the most, more than myself, this trophy is for him, too." , be sincere.

The Spanish international is starring, for the organization of the tournament, another "stellar" season by being the best player in terms of the average performance index (19.4) and the second in scoring (16.6 points per game).

"Mirotic shot the ball this season with historic efficiency, becoming only the second player in EuroLeague history to post shooting percentages of 65-45-85; he made 65.6% of his 2-point shots, 45 .5% of his triples and 87.5% of his free throws," the Euroleague added in a statement.

He was previously chosen 'MVP' of the month in both October and December, giving him a record seven such awards. He was also MVP of the Playoff Round three times. He was also recognized at this gala for his second consecutive selection into the EuroLeague First Team.

As for the election of this season's absolute 'MVP', Mirotic was the first choice of the coaches and captains of the participating teams and the media, beating Mike James (AS Monaco) and Sasha Vezenkov (Olympiacos), second and third. Mirotic is the second Blaugrana to be 'MVP' for the entire season, following Juan Carlos Navarro, winner in 2008-09.

At the gala, in addition to awarding the prizes already revealed in previous days, such as the best young player to Rokas Jokubaitis (Barça) or the best scorer to Vasilije Micic (Anadolu Efes), or remembering the best starting five, the award was also presented to the best coach of the year, won by the Greek Georgios Bartzokas (Olympiacos).

"After leading a storied club back to the Final Four for the first time in five years, Georgios Bartzokas of Olympiacos Piraeus has been voted 'Aleksander Gomelskiy' Coach of the Year by his fellow coaches in the Turkish Airlines EuroLeague," he revealed. the competition.

In his second spell with Olympiacos, Bartzokas led the Piraeus to a runner-up finish in the regular season, with a 19-9 record, and to this Final Four in Belgrade for the first time since 2017, with a 3-2 win. in their 'Playoffs' series against AS Monaco.

1 Luis Enrique will give this coming Monday the list... 2 "An honest man": Guerini defends LREM Jérôme... 3 Margarita del Val warns of a "complicated moment"... 4 The Ibérica Group, new owner of CD Toledo, presents... 5 Alberto Romero's exhibition on Alfonso X is extended... 6 NATO allies still do not give the go-ahead to open... 7 Millionaires wanted by Loto-Québec 8 The Basque Country will give €200 a month for each... 9 Laia Palau retires at the age of 42 10 Margarita del Val urges to stop "as soon as possible"... 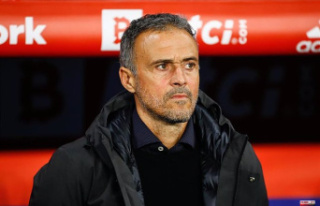 Luis Enrique will give this coming Monday the list...