New Line 10 of the Valencia Metro: map with stops, route and transfer points

Trains and trams already run on the new Line 10 of the Valencia Metro. 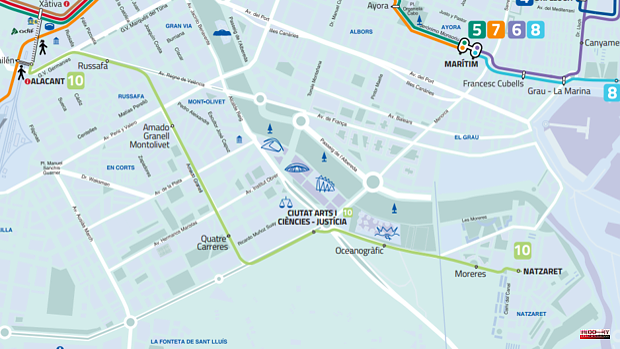 Trains and trams already run on the new Line 10 of the Valencia Metro. The long-awaited project of the Generalitat Valenciana comes into operation through a route that connects the center of the capital of the Turia with the maritime district of Nazaret, passing through the tourist area of ​​the City of Arts and Sciences.

Work on Line 10 of the Valencia Metro, originally conceived as T2, began in 2007, was halted in 2011 and resumed in 2019 to undertake the infrastructure and track superstructure works in the underground and new surface sections ; architecture and equipment; signaling and communications; electrification and substations; and the construction of the Natzaret temporary warehouse and workshop.

It should be noted that its construction has been co-financed by the European Union, through the operational program of the European Regional Development Fund (ERDF) of the Valencian Community 2014-2020.

This line is five kilometers long and has eight stations (three underground and five on the surface) and is located in the east of the city of Valencia. Its layout, therefore, allows linking the city center with one of the main tourist assets such as the City of Arts and Sciences, and with other points that daily represent a great demand for mobility, such as the City of la Justicia, the current and future stadium of Valencia Basket and other sports areas.

In addition, many neighborhoods in the city will for the first time have high-capacity public transportation such as Russafa, Monteolivete, Na Rovella, Quatre Carreres, Moreres and the neighborhood of Nazareth.

Similarly, line 10 of the Valencia Metro will be connected by two pedestrian crossings with the Alacant station from the Bailén and Xàtiva stops.

1 The National Churro Sheep Cattle Fair will graze a... 2 Ana Iris Simón will be the announcer of the 2022... 3 Barkala commits to signing the "best Basque footballers" 4 Cannes Film Festival 2022: the stars expected at the... 5 Virginie Efira: who is her companion Niels Schneider? 6 The climate of violence in Chile dislodges Boric,... 7 Cristóbal Montoro advocates a "selective"... 8 Kick-off between stars and zombies in Cannes 9 Badosa: "I don't get to Paris as I would... 10 The PSOE does not see a problem with the visit of... 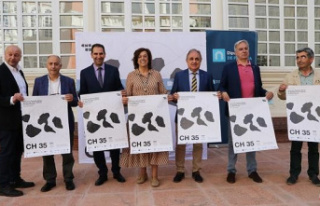 The National Churro Sheep Cattle Fair will graze a...