NBA play-offs: Golden State overthrows Dallas and gets closer to the final

Golden State, however led by 19 points in the first period, managed a winning comeback (126-117) Friday against Dallas, in the wake of Stephen Curry, to now lead 2-0 in the Western Conference final of the play-offs NBA. 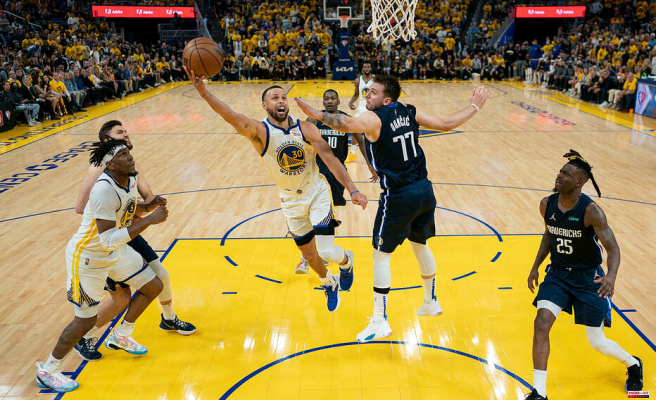 Golden State, however led by 19 points in the first period, managed a winning comeback (126-117) Friday against Dallas, in the wake of Stephen Curry, to now lead 2-0 in the Western Conference final of the play-offs NBA.

Steve Kerr or the art of not panicking, even when the opponent seems unplayable. The Warriors coach found the words and the solutions to respond to the high-flying first act of the Mavericks, leaving all smiles in the locker room with no less than 15 winning shots (out of 27) in the haversack, carried by Luka Doncic then on a cloud (24 pts at 7/12) and who finished with 42 units (8 assists).

If Stephen Curry, author of a remarkable performance (33 pts, 8 rebounds) had not worn his, at arm's length and "bingos" behind the arc (5/7, 20 pts) during these first two quarter, also weighed down by several disputed whistles which had the effect of raising the tension on both sides, it was not twelve lengths behind that Golden State would have accused at the break, but much more.

Whereupon, the Warriors have proven that their reputation as an irresistible team, when the third quarter rings, is not usurped. Returning with other defensive intentions, almost without Draymond Green (6 pts, 6 rebounds, 5 assists) long on the bench for five fouls and therefore on the verge of exclusion, they showed tremendous show of collective strength.

Symbol of the great Californian resources and the genius of his coach, who declared at the microphone of TNT, between the last two quarters, "we knew that they would not return three-point shots like that, throughout the match", the pivot Keyvon Looney strolled in a deserted Texas racket, weighing no less than 21 points and 12 rebounds.

He took the opportunity to become the first Warriors center to shoot at least a 20/10 in a play-off game since the venerable Robert Parish in 1977.

His teammates were not left out. Jordan Poole was California's engine in the last quarter won foot to the floor (43-32), scoring 12 of his 23 points, Andrew Wiggins (16 pts) and Klay Thompson (15 pts) also made important shots.

In the end, Golden State scored 62 points inside, against 30 for Dallas, whose long-range address inevitably ended up dropping, while ultimately proving very correct (21/45). It is the lack of offensive variety, but also the defensive laxity that this has generated that will have cost the victory to the Mavs.

Luka Doncic, revengeful 48 hours after a first match where he was limited to 20 points, was however masterful in scoring more than double. And he was also not alone in scoring, since Jalen Brunson was very effective (31 pts, at 11/19, 7 rebounds, 5 assists) and Reggie Bullock added 21 points.

Dallas will absolutely have to find the right adjustments, or rather the right tactical balance on Sunday for match N.3, in front of its fans. Because for now, the experience of Golden State, three times NBA champion in five finals between 2015 and 2019, makes the difference.

1 At least three civilians killed in the Donetsk region... 2 New government: parity is respected, but the sovereign... 3 The other map of La Palma, the one of the uncertainty... 4 One dead and dozens injured by a tornado in Germany 5 Non-community travelers can enter Spain with a negative... 6 DIRECT. Ligue 1: who will be in Ligue 2 and the Champions... 7 War in Ukraine: Mariupol in the hands of the Russians,... 8 Guadeloupe: ten indicted for looting during the November... 9 The Government uses the internal controls of the Prosecutor's... 10 Celta looks for Zarra for Aspas in a Mestalla with... 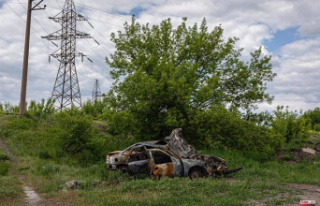 At least three civilians killed in the Donetsk region...