Nadal will seek the fourteenth crown at Roland Garros

To the relief of racket sport lovers, Paris will have the king of clay. 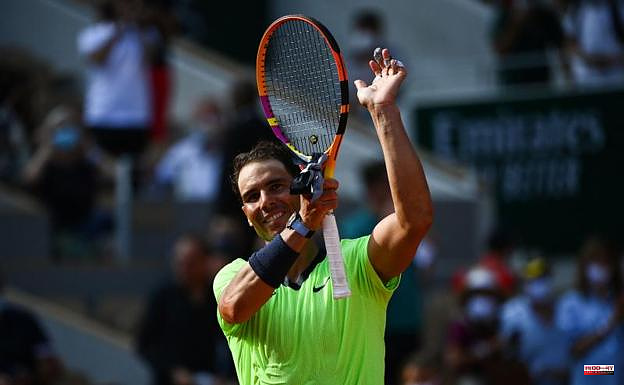 To the relief of racket sport lovers, Paris will have the king of clay. Rafa Nadal travels to the French capital tomorrow to begin preparing for the assault on the fourteenth crown at Roland Garros. This has been confirmed by the Balearic on his Instagram account, where he has shared a photo exercising at his Manacor academy. With a brief: "See you on Wednesday, Paris", he has dispelled any doubt about his physical condition after losing to Denis Shapovalov in the round of 16 of the Masters 1000 in Rome, a match that ended with a visible limp derived from the chronic injury he suffers on his left foot.

Nadal's participation in his fetish tournament would not be news if it weren't for the words that the man from Manacor spoke in the Italian capital. “I am not injured; I am a player living with an injury. He is there and my day to day is complicated. I try, but it's hard for me. There will come a day when my head tells me enough. I play to be happy, but pain takes away your happiness, and not just to play, but to live. My problem is that many days I live with too much pain. I enjoy what I do, but it gives me many days of unhappiness », he launched before the media at a press conference that set off all the alarms regarding his presence at Roland Garros.

The degenerative ailment that Rafa has suffered since he was 18 years old (on June 3, in the middle of Roland Garros, he turns 36) is called Müller-Weiss syndrome. For this reason he was four months without playing last year, from August until his triumphant reappearance in January. In a spectacular start to the year, the best of his career, he chained 21 victories to lift the titles of Melbourne, Australian Open and Acapulco. He reached the Indian Wells final, but a crack in his ribs prevented him from competing one hundred percent against champion Fritz. In his last appearances, Carlos Alcaraz defeated him in the quarterfinals in Madrid and Shapovalov in the round of 16 in Rome. The current clay court tour has been the first in which Nadal has not reached any final on clay, a thorn that wants to be removed in his favorite habitat, where no one has won more times than him.

As the number 5 in the world rightly says -he gave the fourth yesterday to the Greek Tsitsipas-, his physical condition is an unknown despite confirming his participation, but the mere registration of the Balearic in the tournament forces him to be included in the list of favorites for lift the Musketeers Cup on June 5 at the Philippe Chatrier.

With the previous phases already in play, next Sunday the final draw begins -not yet drawn- at Roland Garros. At the moment, Nadal's debut date is unknown, as well as Carlos Alcaraz, another of the candidates for the title along with world number one, Novak Djokovic. The Serbian is the current winner of the tournament after beating Stefanos Tsitsipas a year ago.

1 Museum Day 2022 in Valencia: free tickets, new schedules... 2 Rueda claims "linguistic cordiality" and... 3 Affected by inhaling smoke a pregnant woman by a burnt... 4 The first Canarian coin, located in a market within... 5 The 'Crims' program identifies the young... 6 Twelve arrested and dismantled a criminal organization... 7 Toledo and Cuenca dispute the grand finale of 'I... 8 These are the requirements to enter NATO and some... 9 World Padel Tour hopes to break all its records in... 10 Demonstration of SOS Talavera on June 12 to request... 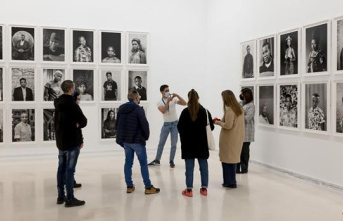