Nadal and the uncertainty of Paris

Rafa Nadal's words after losing to Denis Shapovalov on Thursday were disheartening. 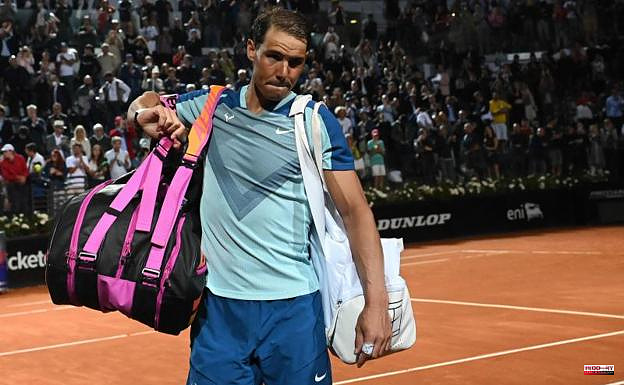 Rafa Nadal's words after losing to Denis Shapovalov on Thursday were disheartening. Rarely has the tennis player from Manacor been seen in that state of mind. “I am not injured; I am a player living with an injury. He is there and my day to day is complicated. I try, but it's hard for me. There will come a day when my head tells me enough is enough. I play to be happy, but pain takes away your happiness, and not just to play, but to live. My problem is that many days I live with too much pain. I enjoy what I do, but it gives me many days of unhappiness," Nadal explained at a press conference.

Minutes before he had lost to the Canadian in the round of 16 at the Masters 1,000 in Rome, but the defeat was not the worst. He spent the last set limping, limping, with clear signs that the foot problems had returned. The lofty level of the first set, in which he swept the Canadian, had faded. Only pain remained. And all this happened eleven days before the start of Roland Garros, the big date in red on Nadal's calendar, who has never reached the second Grand Slam of the season under these circumstances. He has never landed in Paris without at least one final on clay.

The only example to look at was the 2015 season, when he only reached the final of the Masters 1,000 in Madrid. That is the only campaign - not counting 2020, when there was no clay tour - in which Nadal played Roland Garros without having won any title on this surface. A rarity for a tennis player who shows off 12 wounds in Barcelona, ​​11 in Monte Carlo, 10 in Rome and four in Madrid.

He still has the thorn of never having won all the land titles in the same year, something he touched in 2007, 2008, 2010, 2011, 2012, 2013, 2017 and 2018, when he was just one trophy away from getting the final poker game in clay. Now the film is very different. After the best start to the year of his career, with 20 wins in a row and triumphs in Melbourne, Australia and Acapulco, Nadal has suffered a sudden stop. The pectoral injury, with a cracked rib, was a setback in the Indian Wells final that knocked him down for six weeks and prevented him from competing in Monte Carlo and Barcelona, ​​the tournaments that best suit his game.

A break that is more serious now that the Spaniard has only been able to make the quarterfinals and eighth finals in Madrid and Rome, respectively. Just five games on clay, about 11 hours and a half on the track. Not surprisingly, after beating John Isner on his debut in the Italian capital, he immediately asked his team to book a training pitch. He needs games, rhythm, and he's not going to get any more before Roland Garros.

The Balearic will debut on Monday 23 or Tuesday 24, with a record recovery time after the defeat in Rome. "I don't know what will happen tomorrow or what will happen in two weeks," Nadal snapped. “I just have to get my feet to allow me to play. Today (for Thursday) I have seen positive things. For a while I was able to play at my best level since the injury. I will not stop believing so I can have a chance. I will not fail on that. If there is even a remote chance, I will be prepared to fight for it », he guaranteed.

With the defeat in Rome, Nadal loses 910 points from last year's victory and falls to fifth place in the world ranking. A step back that will have its consequences in Paris. Nadal will not break into the top four seeds and could meet Novak Djokovic in the quarterfinals. The last time that happened, in 2015, the Serbian achieved his first victory over the Balearic at Roland Garros. The great start to the year does allow the Spaniard to maintain first place in the race to Turin, where the Masters Cup will be played.

1 Hoeneß is "catastrophically" annoyed: Bayern... 2 A judge investigates the former director of Kirolene... 3 Amurrio starts his title defense at Interpueblos 4 A couple of tricks to try to break a long drought 5 What is Kirolene? 6 Nadal limps ten days before Roland Garros 7 Barça transfer Coutinho to Aston Villa 8 MotoGP resumes action after Suzuki earthquake 9 Vales: "A call from Athletic are big words" 10 Project in East Africa: Deutsche Bank does not want... 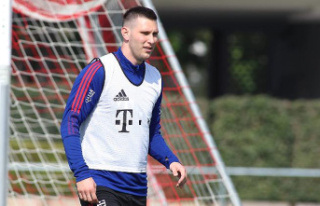