Museo de Santa Cruz, Vivo rejects the possible return of the medieval polychrome tables to the hotel where they were found

There are numerous archaeological finds in a city like Toledo. 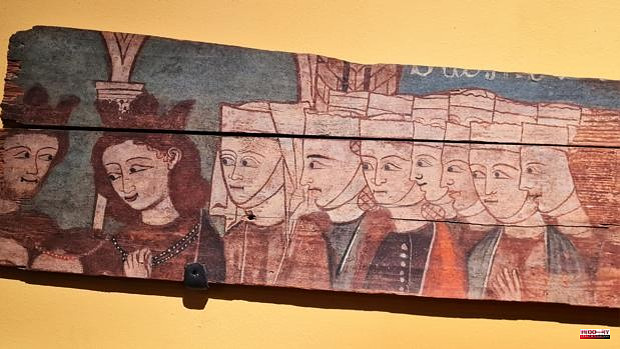 There are numerous archaeological finds in a city like Toledo. As an example, until very recently ABC reported on the remains from the Roman era that appeared at different points. Quite an impact had the appearance in December 2018 of a series of polychrome panels with watercolor from the medieval period, where a little-known part of the decorative arts of the time is shown. They were located during the construction works of a luxury macro-hotel that are still going on between Bajada del Pozo Amargo and Callejón del Vicario.

«These tables, carried out the obligatory intervention in situ by the experts, were delivered to the Museum of Santa Cruz, as established by the current regulations on archaeological remains. Now they are part of their funds with the aim of their conservation for future generations.

They are a find of exceptional value due to the scarcity of pieces of these characteristics and, given the rumors that they could return to the property of the hotel, once the works are finished, we express our greatest rejection that this restitution is produced, more today being the International Museum Day; the values ​​that stand out today must be extended to 365 days of the year».

This is how the Santa Cruz Museum association pronounced itself this Wednesday, ¡Vivo! through a publication on his Facebook wall and also through an email sent to this newsroom late in the day. Its president, Rafael García Serrano, still does not know what the final decision will be and believes that it should be the competent administration, in this case the Junta de Comunidades de Castilla-La Mancha, that explains what is going to be done as the owner of the remains.

Of course, when asked about the possibility that the polychrome tables be exhibited in the hotel where they were found, he thinks that it would seem "a real barbarity and nonsense that it were so, but with this Board of Calamities everything is possible." Rafael García Serrano, who was director of the Santa Cruz Museum for twenty years and later of the National Costume Museum, recalls that the 1983 Law states that any archaeological remains found in Castilla-La Mancha become the property of the Department of Culture of the Government regional and, in the case of Toledo, it must be preserved in this museum space that he directed since 1987.

According to reports, the state of conservation of the panels is "magnificent", since it is a work of the thirteenth or early fourteenth century, which would correspond to the decoration of a rich room with court scenes, hunting, parades or equestrian combats. . Despite their good state of conservation, they have required the intervention of a team of expert restorers under the direction of Miguel Ángel Bonache, the result of which can be partially seen in the exhibition 'Alfonso X: The Legacy of a Precursor King', in which 12 boards of the 33 boards found in perfect condition are exposed.

Thanks to the treatment of the panels, which has been carried out in the restoration workshops of the Santa Cruz Museum, it has been possible to deepen their cleaning, consolidate and fix the original pictorial layer, adhere certain fragments, as well as carry out the chromatic reintegration of the documented losses, always with reversible techniques for future investigations. In this museum space they are exhibited in the upper transept and, since International Museum Day, four of them can also be seen temporarily in the lower transept, integrated into the museum's permanent exhibition, along with a poster that includes a QR code with very interesting additional information.

The current director of the Museum of Santa Cruz -where the tables are kept-, Antonio Dávila, who replaced Luis Fontes on April 1, confirms that "there is no final decision" on the definitive place of exhibition of the polychrome tables. As he points out to ABC, "there is an intervention still underway." “When the work is finished, the museum will be responsible for conservation, but until there is a final report, what is done with them will not be decided,” says Dávila, who clarifies that the owner is the Community Board and, If necessary, you could reach an agreement and sign a transfer contract with the hotel to exhibit them. In any case, the person in charge of the museum space announces that he will shortly visit the place where the remains were found to assess the situation.

The boards, which were found reused as carpentry material in a slab, would correspond, originally, to the decoration arranged on the upper part of the walls of a quadrangular room, forming and delimiting the start of the alfarje that would support its roof. In this way, it would mark the transition between the walls of the room and the ceiling, both, surely, also decorated with profuse polychrome, as explained at the time of its discovery by the Ministry of Education and Culture, with which ABC has contacted, but At the moment he has not ruled on the possible exhibition of the same in the hotel.

Various decorative motifs with human figures can be distinguished on these panels, in several cases framed by Gothic architectural elements. Among these figures there are representations of kings with their retinue, courtiers, scenes of combat on horseback, and even the representation of two characters, one of whom is indicated as Plato, the Greek philosopher. This last scene, furthermore, presents the peculiarity that the human figures are framed by a bookcase on whose shelves the books of a library are kept, there is another table in which the central motif is these books, bound to the taste of the time, and with the headings “Liber fisio…, liber de cabbage…” on their covers.

It is logical to assume that the promoter of this commission for the decoration of his home was a certainly well-to-do person, with availability of resources, perhaps even related to the cathedral of Toledo itself, who, evidently, shows a special sensitivity for science and knowledge. , but that he must also have had very direct relations with the army and, surely, with some specific act of arms that he is capturing in these tables, and that he must also maintain some kind of relationship with the Castilian monarchy, which makes him know the court and allows him to capture even the figures of the monarchs (apparently with two of their children) in another of the tables.

1 Rueda unveils his 'praetorian guard' after... 2 The CIS consolidates the 'Feijóo effect'... 3 Turkey's veto disrupts plans for an 'express'... 4 NIU Houses, the houses that revolutionize the sustainable... 5 Vázquez will summon the political forces in "the... 6 Cardboard and packaging will be collected daily in... 7 Don Juan Carlos is already flying to Spain and is... 8 School year 2022-2023 in Valencia: provisional list... 9 The judge rejects the complaint of an individual against... 10 The Anti-Corruption Prosecutor will investigate Rubiales... 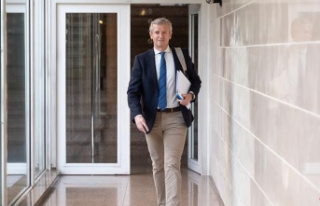 Rueda unveils his 'praetorian guard' after...