More than 3,000 runners dye the Castellana with the colors of Ukraine, in a march for peace

«In the worst moments, the city of Madrid always shows its face. 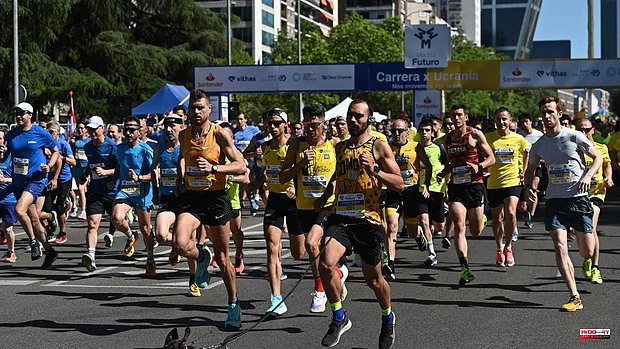 «In the worst moments, the city of Madrid always shows its face. Seeing the entire Paseo de la Castellana full of blue and yellow t-shirts in solidarity and support for the Ukrainian people is a source of pride, bringing together sport and even more so this year that we are the world capital of sport». These are the words with which the mayor of the capital, José Luis Martínez-Almeida, has explained his presence in a popular race organized by Madrid Futuro and that this Saturday has occupied a good part of the Paseo de la Castellana.

When more than three months have passed since the Russian Army's invasion of Ukraine, unleashing a fierce war with global impact, and while its people are showing admirable resistance, courage and capacity for suffering, 3,000 participants have joined a 5-kilometre race organized with the aim of keeping the support of the people of Madrid alive for the Ukrainians.

The race, promoted by Madrid Futuro, together with the Embassy of Ukraine and the Mayor's Office of Madrid, and sponsored by Vithas, the Herbert Smith Freehills Foundation, Clear Channel, EMT and Banco Santander, has had the participation of more than 15 embassies, who have walked hand in hand in solidarity with the Ukrainian people.

The exit has been carried out by the Minister Counselor of Ukraine, Dmytro Matiuschenko, who has insisted on the need for this type of act so that the conflict that the country is experiencing is not forgotten. “I want to thank the support of Madrid Futuro, the Madrid City Council and all the embassies that have been supporting the people of Ukraine in our fight for peace”, he underlined.

Once the start was given, the flags have waved from Plaza Cuzco to Paseo de Recoletos, creating a melting pot of nationalities that walk together for Peace. Behind them, hundreds of runners have formed a kilometric flag with the colors of Ukraine in a massive solidarity movement in Madrid.

In addition to the mayor, the march was attended by Borja Carabante, Councilor for the Environment and Mobility; the General Director of Sports of the Madrid City Council, Alicia Martín; Pablo Vázquez, director of Madrid Futuro, and representation of the rest of the political forces in the City Council. The athletes Abel Antón and Martín Fiz have also put on their sneakers, this time, to run for peace and to achieve a large collection for humanitarian aid in the country.

1 Tudanca, before the municipal: "We have no right... 2 Murders, rapes and prostitution: the criminal face... 3 Fair Trade Festival in Valencia: program of activities... 4 The Netón of the 'green berets' or the... 5 Mazón: «The left is incapable of understanding that... 6 Paula Prado, one year after the municipal ones: "Every... 7 The families of Villa de Pitanxo will sue the boss,... 8 Spain will send 100 more soldiers to Latvia with the... 9 Streets closed and EMT lines diverted in Valencia... 10 Champions League: Liverpool – Real Madrid, an ever-enduring... 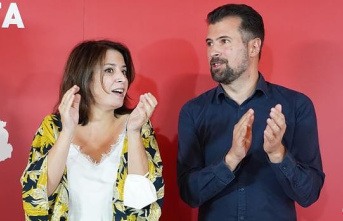 Tudanca, before the municipal: "We have no right...