Valentina appears out of nowhere among the rubble of her street in Malotaranivka, a neighborhood of Kramatorsk, looking at the blood dripping from her hand and almost annoyed at her clumsiness. 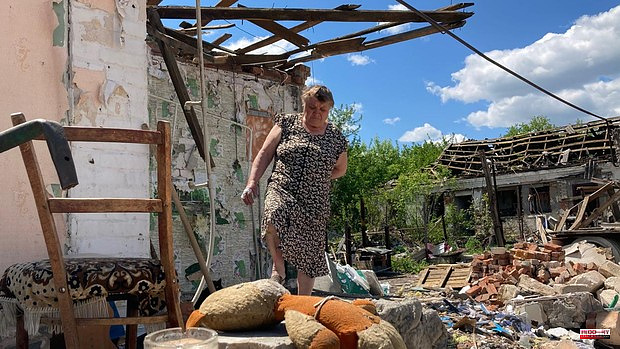 Valentina appears out of nowhere among the rubble of her street in Malotaranivka, a neighborhood of Kramatorsk, looking at the blood dripping from her hand and almost annoyed at her clumsiness. "It's nothing, don't worry," she says through clenched teeth. "It is impossible not to get hurt among these ruins," he protests while climbing and descending mounds and reviewing with his eyes the Dantesque scene in which his street has become, a few days ago a residential area of ​​the administrative capital of Ukrainian Donetsk and today a succession of destroyed buildings.

In the middle of the panorama, just 25 meters from his house, a huge crater several meters in diameter and several others deep dispels any doubt about the type of ammunition, an aerial missile.

"I was in the bathroom when it happened, and that's what saved me," he says, showing what's left of it. The roof has blown off and the toilet, sink and bathtub are covered in debris. With the shower pipe, which spits out water constantly, he fills plastic bottles. “When I heard the explosion, I closed my eyes and sat on the ground. I only remember hearing my son, who had left the house minutes before, scream. "Mom, mom ... are you alive?", He continues touring what remains of his house. "Good thing I wasn't in the kitchen," she continues. “Look, the walls and the roof were blown up. The refrigerator, the stove, the boiler and the washing machine have disappeared. You see how the only remaining wall is », she explains, literally ripping off pieces of plaster as she peels off the floral wallpaper that previously decorated the room. On the floor, homemade moldy tomato preserves are the only trace of the place's original function.

Valentina was lucky, since the building where the missile fell has vanished. Another 50 houses were affected by the explosion that devoured the entire block, in an increasingly frequent scene in the shrinking section of the Donbass in Ukrainian hands whose situation deteriorates by the day.

The ferocious Russian onslaught, which is now strengthening itself in specific pockets to secure smaller positions instead of sustaining the tactic used until now consisting of an offensive from all fronts in Donbass, includes more and more deadly and destructive airstrikes. , destroying infrastructure, collapsing municipal services and forever ruining the lives of demoralized residents who until now have refused to leave, claiming they have nowhere else to go. “My children used to play here. I have raised them in this house. Now my daughter lives in Yakutia for work, with my two grandchildren, and she asks me to go with her, but how could I do it? Who is going to let me go with them? I am waiting for a corridor to Russia to open, and then I will go with Natasha, because we have no help here and no house left. I have nothing left."

The situation in Kramatorsk worsens as the front line approaches, something that happens every day since completing the occupation of Donbass is a priority for Russia. In Limán, a small town located a few kilometers from Slaviansk (the natural route when attacking Kramatorsk by land), the Russian flag waved yesterday over the City Hall in a threatening revulsion that confirms the advance of the front. From the road that connects Limán with Raigorodok, columns of smoke clouded the horizon and artillery explosions followed one another without pause on both sides of the front. "Just yesterday, a projectile fell just 70 meters from us," explained a policeman in charge of a checkpoint that facilitates access for military and humanitarian aid. "The situation is very difficult there right now, as you can see from the plumes of smoke," he continued. “We believe that special forces have been brought in to carry out the assault, due to the type of new material that we have found. The Russians are advancing positions inside the city, and if they succeed that would give them access to all that we have left of Donetsk, ”the agent explained graphically.

Ukrainian trucks full of ammunition were crossing at full speed towards Limán and military tanks and ambulances were moving through the area, suggesting that the supposed Ukrainian withdrawal that the Russians presume has not yet taken place. The northern sector of Limán has indeed been occupied: the Moscow men reportedly forced the residents to lock themselves in the cellars for three days, otherwise they would be executed.

In neighboring Lugansk, the other part of that Donbass longed for by Moscow, some 10,000 Russian soldiers are taking part in the offensive against the few cities still in Ukrainian hands and preparing what the Institute for War Studies (ISW) considers to be "the final preparations for the Battle of Severodonetsk, which includes heavy artillery fire, air strikes, and a massive ground offensive aimed at cutting off Ukrainian troops' lines of communication."

Governor Serhii Gaidai admits that 95% of the province is already out of his control. The Russians have taken up positions in the southern district of Toshkivka, south of Lisichansk, and in other towns on the so-called highway of life, the only escape route from the aforementioned cities and, above all, from Severodonetsk, the administrative capital of the Ukrainian Lugansk. and objective of the current offensive, whose defense seems arduous. The videos that arrive from the city coincide with the dialectical drama of Gaidai, who speaks of "a new Mariupol" and an attempt to "wipe Severodonetsk off the face of the earth." Blackened facades whose interiors appear to have been sucked out and mountains of rubble make up the city's streets. Yesterday, the airstrikes were added to the intense and prolonged artillery fire that is constantly raining down on Severodonetsk.

The Russians, for their part, speak of "tactical successes that threaten to become operational successes," in a veiled admission that the goals of subduing Donbass are being met. In Lisichansk, the other most important city of Lugansk still in Ukrainian hands, a "sustained and powerful artillery attack" was experienced on Wednesday that killed at least one person and in neighboring Ustinovka the artillery fire killed two more civilians. According to Gaidai, the police have replaced the funeral services in Lisichansk to bury bodies and 150 people have already been buried by the agents in a mass grave in a single district of the city. One of the projectiles hit a humanitarian aid center.

If Severodonetsk and Lisichansk fall, Bakhmut, the first town in neighboring Donetsk in their direction, will be the next piece to knock down. The shelling has increased as it happens in Kramatorsk, where the memory of the train station attack, the massacre of 59 people that led most of the population to flee, is revived with each new attack on civilian buildings - at least 350 Educational centers have been bombed in the province of Donetsk, according to the Ukrainian authorities – like the one that on Wednesday destroyed a section of a seven-story apartment building miraculously without casualties.

Yesterday, neighbors grimly cleared away their apartments on Sofiyskaya Street, replacing disintegrated windows and balconies with plastic and wooden planks and collecting broken glass with which they filled garbage containers. "I slept in my bed and I was overwhelmed by the explosion, I'm still in shock," explained Serguei, a neighbor, after parking his car loaded with plastic material. “I don't even remember how I managed to get up to hide in the corridor, I only know that my legs hurt a lot. If the curtains hadn't fallen on me, the wave of glass would have riddled my body. There are no words to describe it », he added. Nina Grigorievna, 82, was caught sleeping on her sofa by the explosion. "Why did they attack him? I can't think of any reason to do it », wondered the confused old woman, who insisted that she will not leave her house. "I can't even go down the stairs in this building. How was I going to get on a train? I'm not going anywhere." 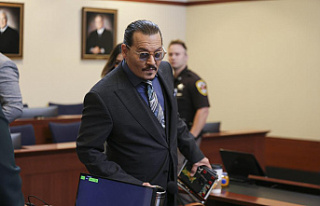