Miami breaks down the Celtics in a Jimmy Butler display

In a superb performance by Jimmy Butler -who scored 41 points, collected nine rebounds, distributed five assists and made three blocks-, the Heat came from behind the Boston Celtics (118-107) in the first game of the Eastern Conference final of the NBA. 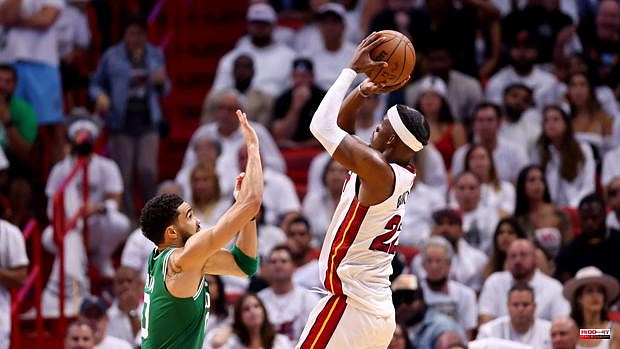 In a superb performance by Jimmy Butler -who scored 41 points, collected nine rebounds, distributed five assists and made three blocks-, the Heat came from behind the Boston Celtics (118-107) in the first game of the Eastern Conference final of the NBA. Those of Spoelstra signed the 1-0 in the series thanks to a defensive recital in the second half that allowed to eclipse the star of the Massachusetts, Jason Tatum.

Tatum himself had arrived at Miami's FTX Arena with joy and confidence through the roof: he had led his team in an unlikely undertaking, eliminating the reigning NBA champions, Antetokounmpo's Bucks, in seven games. These personal exhibitions finally confirmed him as a man capable of starring in a winning project after a bittersweet relationship with leadership.

However, now and thanks to excellent basketball, at only 24 years old, he is the cornerstone of a hungry Celtics.

Thus, in the first two quarters of the Eastern final, Jason quietly scored 21 points. In addition, Pritchard's triples, Jaylen Brown's versatility and Williams' solvency under the basket completed a Celtics without Horford (coronavirus) or his alma mater Smart (slight ankle sprain). Before halftime, Udoka's men had an eleven-point advantage over the franchise with the most victories in the east, but when they came back from the locker room, everything changed.

The Heat, badly injured in attack without Lowry, took refuge in defense. And from the intensity of the pressure and the fast play in transition, the 2020 finalists were back in the game. Likewise, when defending hard and attacking fast, the virtues of a competitive animal like Jimmy Butler are multiplied.

Under the baton of the versatile shooting guard, the Heat turned on their fans and began to come back from the game. Herro, Butler's faithful squire, scored 18 points off the bench, while Jimmy handcuffed Tatum over and over again in heads-up play. 1-0 for those from Florida in a tie that is expected to be long, winding and, of course, fascinating. Next Thursday, on the same southern stage, the second game of the series will take place.

1 Calviño accuses the PP of wanting to cut public services... 2 Belarus introduces death penalty for attempted 'terrorism' 3 Iran seizes fuel smuggling ship in the Gulf 4 A soldier sings in Mariupol the song with which Ukraine... 5 They investigate a gang rape of two girls in a house... 6 Biden condemns those who spread the racist ideology... 7 Girmay abandons the Giro due to the blow to the eye... 8 The CNMV lifts the suspension of Siemens Gamesa listing... 9 Stade Toulousain launches its NFT collection for club... 10 UK inflation hits all-time high of 9% in April 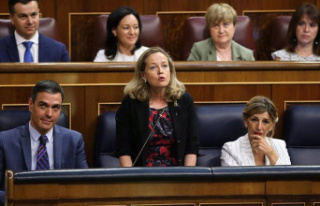 Calviño accuses the PP of wanting to cut public services...