Merkel breaks her silence: "My heart beats for Ukraine, but we must take reality into account"

In her first statements since she left the Foreign Ministry last January, Angela Merkel has recognized that she has been affected by the invasion of Ukraine. 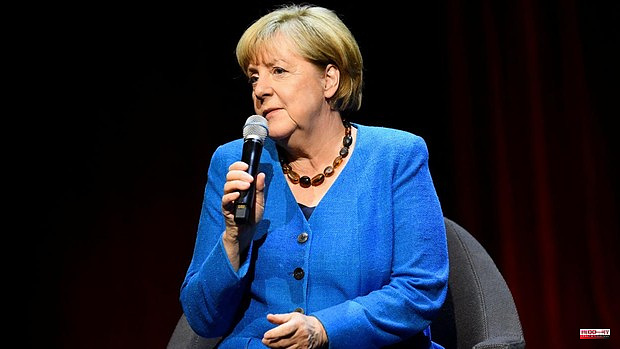 In her first statements since she left the Foreign Ministry last January, Angela Merkel has recognized that she has been affected by the invasion of Ukraine. The former German chancellor has strongly condemned a war that she describes as "brutal" and "violates international law." "There is no justification for this attack on Ukraine," she said during a conversation with the journalist and writer Alexander Osang at the Berliner Ensemble. “Like many others, I am depressed these days”, he has admitted, “February 24 marked a turning point and that also worries me a lot”. Merkel admits that, of course, she asked herself the question: "Could we have done more to prevent the tragedy?" In her last days in office, the situation in Ukraine had already deteriorated.

"It was clear that this had to be taken very, very seriously," he recalled, and expressed his confidence in the current government, under the orders of the Social Democrat Olaf Scholz, to manage the crisis.

The interview, broadcast on the Phienix television network, is part of a series of conversations around the question "So what is my country?" and it has aroused great expectation, since Merkel has remained in the strictest silence since she left the government. She has revealed that she "imagined things differently" after leaving the Chancellery. However, the Russian invasion of the Ukraine marked a "rupture" that she "sometimes depresses". According to her, the Russian invasion "has no justification". Rather, it is a "brutal attack that disregards people and for which there is no excuse."

Merkel considers the government transition after her departure as "successful". Still, looking back on the Ukraine war, she occasionally wonders "what did we miss?" or "could it have been prevented?", although she also emphasizes that "I have no reason to blame myself." “I am glad that I do not have to accuse myself of not having tried hard enough to prevent something like this, especially together with the respective French president. It is a great sadness that we were not successful, but I cannot blame myself for not having tried everything. She, too, does not regret not having promoted the inclusion of Georgia and Ukraine in defense structures that could have protected her. "That was not the Ukraine we know today, the country had not been consolidated, it was steeped in corruption, a country dominated by oligarchs. They couldn't be brought into NATO overnight."

At the time, Merkel announced a break of several months and a public pause for the period after the end of her mandate. She had only made a few terse written statements about the Russian attack on Ukraine in recent months. In all of them, she has supported all relevant efforts by the German government, the EU, the US, NATO, the G-7 and the UN "to stop this barbaric war of aggression by Russia." She now adds that, during her farewell visit to Moscow, she had already realized that when it came to critical issues, she "couldn't go any further." During her tenure, Merkel always made the need to keep an open window for diplomatic solutions to the crisis a priority, although in the narrow circle of her aides, Merkel had left no doubt about her assessment of Putin as a cold, calculating strategist and I knew I had to deal with his lies.

"At the latest in October, at the G-20 summit in Rome, it was already clear that Putin had concluded an agreement with Minsk, that was the only trump card we had in our hands," he recalled. «Putin told me in 2007 that the disintegration of the Soviet Union was the worst thing that had happened to him in the 20th century, for me it was a liberation. In reality, it has never been possible to completely end the Cold War, we have not been able to create a defense structure to prevent this, although the attack is without excuse. "Putin's understanding of values ​​is different from ours, he believes that democracy is a mistake. I have always acted in the interest of my country and in the interest of living in peace. My heart has always beaten for Ukraine, but we must also take reality into account. Now everyone wonders what a victory will be. I want Ukraine to come out of the war as well as possible, that is the goal », he defines. In his statements, he hints that the fissures in the EU weaken peace in Europe. "I thought, with Macron and with Biden, that Russia had to be forced in one direction. But there was no agreement in the EU about it », he reveals. Chancellor Scholz has acknowledged that he has consulted Merkel on several occasions, but she has preferred "not to talk about it, and in any case it is not about calling me five times a day."

In view of Germany's dependence on Russian energy supplies, Merkel's handling of the Russian-German Nord Stream 2 gas pipeline has been criticized. The former chancellor has said she wants to make it clear that "I do not want to hide" after leaving office and that this has not been the cause of his silence during the last few months. Rather, she has pointed out, after 16 years as chancellor she wanted to "take a break, do something different, do something that makes me happy." To critics who have accused her of only going on "feel-good dates," she has responded, "Only feel-good dates? I say yes!" According to information from those around her, the former chancellor relaxed in the first weeks after leaving office near Templin, in Uckermark, where she has a small house, and taking long walks along the Baltic Sea. "The best thing is that everyone knows me along my route, they are not surprised to see me or say anything to me," he sighs, "my constituency has always been my base, people know I'm there, but they don't run to tell the newspaper ».

In this new stage, she has become a fan of audiobooks and enjoys classics like Macbeth, the tragedy by William Shakespeare. During a vacation in Italy, she Merkel had to realize how much she remains in the public interest and how little she can go unnoticed. “I knew there would be problems, but I wanted to travel to make it clear that I am no longer chancellor and I do not omit out of duty. I can no longer be allowed to travel only to the Uckermark for the rest of my life », she claimed, obtaining applause from the public attending the interview. In fact, she wants to travel to Bhutan. Also to the Rocky Mountains. She has received many requests from the scientific community for visiting professorships, but she still does not clarify what she wants to do in the future, although no one believes that at 67 she really thinks about her retirement. “I only have two things planned”, she has said, “more movement, which I had really neglected, and I never got to read more. I am discovering the world of the audiobook. Macbeth and then Don Carlos.

In the most intimate moment of the interview, he talked about his tremors. "It was related to the death of my mother and later with the fear that that episode would be repeated," she has confessed. Among his frustrations he mentions the operation to leave Afghanistan.

1 «This is what it is: people only want to work eight... 2 Police release sketch from girl discovered in Toronto... 3 Merkel defends Germany's approach to Ukraine:... 4 The victims of Pitanxo will force a face to face with... 5 Uvalde-born Matthew McConaughey blows up at White... 6 Son of Buffalo victim presses Congress: "What... 7 US faces a greater extremist threat going into the... 8 Serrat starts his last trip through Spain 9 Julián Ruiz, the man with a million vinyl records 10 Madrid will spend 50 million this year to renew the... 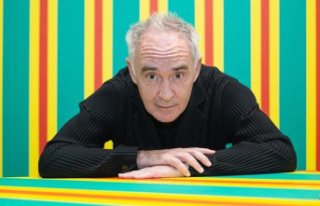 «This is what it is: people only want to work eight...