Medina Cantalejo now shows his chest: "The VAR only had 5 errors out of 143 interventions"

At the press conference of the Referees Technical Committee, held at the Ciudad de Fútbol de las Rozas, the balance of the refereeing decisions made during the sports season was drawn up. 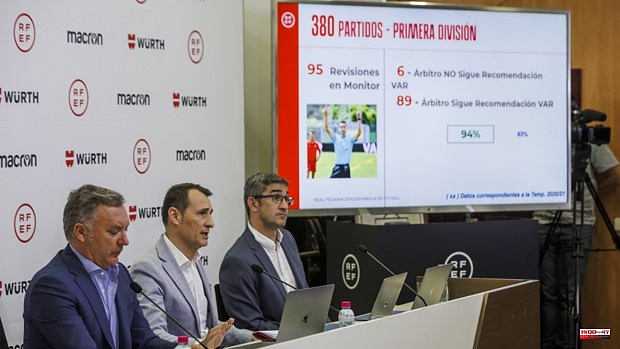 At the press conference of the Referees Technical Committee, held at the Ciudad de Fútbol de las Rozas, the balance of the refereeing decisions made during the sports season was drawn up. The event was attended by the president of the Referees Committee, Luis Medina Cantalejo, the director of the VAR Project, Carlos Clos Gómez, and the member of the CTA Technical Commission, Alberto Undiano Mallenco.

The act opened with the designations of the referees for the Qatar 2022 World Cup, where Mateu Lahoz will represent the country. The Valencian will thus become the second Spanish referee in history to officiate matches in more than one World Cup after his time in Russia four years ago.

Only one other referee was present for three appointments. This is Juan Gardeazábal, who refereed in Sweden 1958, Chile 1962 and England 1966. In addition, Spain will also be the country with the most assistants (3) of the VAR in the World Cup.

Another important step highlighted was made with the first female arbitral representation in the Europeans (Marta Huerta de Aza and Guadalupe Porras). This year Spain achieved international success, it was the European country with the most designations in continental competitions, 26 between the Champions League and the Europa League.

The president of the Committee commented on various aspects of the season: the successes and the refereeing errors. In the first part he underlined the strength of the refereeing class in hostile environments. And that, with the help of the VAR, "he sought a fairer competition", in the words of Cantalejo. Regarding the failures of the category, possible errors were humbly admitted, since "recognizing it is the first step to improve."

In the second part of the conference, the data that demonstrated the effectiveness of VAR during the season was shown. Some very significant figures emerged from these figures, such as the fact that the average discount time increased by 32%. Mallenco specified that measures will be taken to reduce the episodes that are seen at the end of the game, such as "false" injuries. Just as there were more sanctions for violent behavior and protests that produced an increase in the use of cards, red and yellow at the same time. It is also necessary to underline the real incidence of the goals: in 12% of the goals there was influence of the VAR decisions.

One of the great innovations that was discussed was the introduction of female referees in the League. The president expressed: "In a very short time they will be ready to debut in the highest category, because there is also a need to introduce new examples in the world of sport."

1 PSG: the arrival of Luis Campos formalized at the... 2 The Bank of Spain points to fiscal policy as a key... 3 Roland-Garros: Rublev's anger came close to disqualification 4 14 years in prison for the Rontegui slaughterer 5 Audiovisual works: agreement to remunerate authors... 6 Roland-Garros: tennis legends pay tribute to Tsonga 7 Roland-Garros: the immense emotion of Tsonga on his... 8 Geoxia, owner of Maisons Phénix, placed in receivership 9 Mazón: «Puig is incapable of defending the interests... 10 The BMV band reduces their sentences to a quarter... 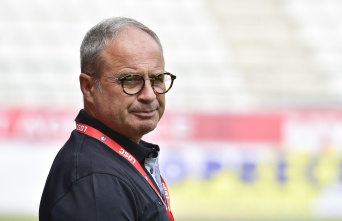 PSG: the arrival of Luis Campos formalized at the...