McCarthy still did not secure the required majority, but for the first time received more votes than his opponent from the Democrats, Hakeem Jeffries.

McCarthy still did not secure the required majority, but for the first time received more votes than his opponent from the Democrats, Hakeem Jeffries. McCarthy had previously made far-reaching concessions to his opponents in the Republican ranks.

In the first eleven ballots, 20 ultra-right Republican MPs voted against McCarthy, who consider him too moderate and question his loyalty to ex-President Donald Trump.

The election marathon in the House of Representatives is an embarrassment of historic proportions for the opposition Republicans, who have held a majority in the Congress Chamber since the midterm elections in November. The last time an election process lasted longer than the current one dates back to before the American Civil War: in 1856, the members of parliament only agreed after two months and 133 votes.

Without a chair, the deputies cannot be sworn in, form committees and begin drafting legislation. The election is repeated until a candidate achieves a simple majority in the House of Representatives.

1 Business in Russia: Our man in Moscow: Why a German... 2 Crime: Woman found dead in apartment - chainsaw secured 3 Open dealings: The case of Werder professional Niklas... 4 Biathlon: Doll fourth in the sprint on the Pokljuka... 5 Streaming: Avenging Angel with Bone Saw - "Totenfrau"... 6 Sesame Street: Ernie in his pajamas at the "Daily... 7 Stock exchange in Frankfurt: Strong first stock market... 8 Labor market: Unemployment in the USA drops to 3.5... 9 Infidelity: Cheating statistics are increasing: There... 10 Domestic policy: After New Year's Eve riots:... 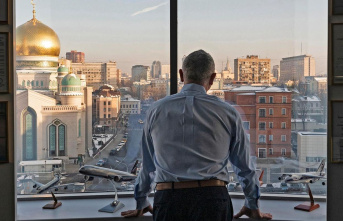 Business in Russia: Our man in Moscow: Why a German...