The concentration in Alicante called by irrigators and farmers in favor of the maintenance of the Tajo-Segura transfer has brought together this Tuesday in the Plaça de la Muntanyeta representatives of all parties, who have raised their demands to the Government on infrastructure. 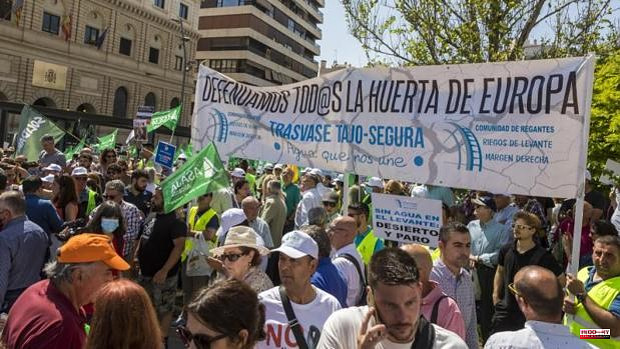 The concentration in Alicante called by irrigators and farmers in favor of the maintenance of the Tajo-Segura transfer has brought together this Tuesday in the Plaça de la Muntanyeta representatives of all parties, who have raised their demands to the Government on infrastructure. From the Generalitat, the Executive has been demanded to reconsider its position, considering that there is "margin for negotiation" in an infrastructure that they will defend "tooth and nail".

Thus, the Minister of Agriculture, Mirella Mollà (Commitment), has asked to "reconsider" its position to cut the flow, as it considers that there is "room for negotiation", the PSPV-PSOE has called for a "common front" before a infrastructure that he reiterates is "indispensable" and will defend with "nails and teeth".

From the PP, the president of the Diputación de Alicante and the PPCV, Carlos Mazón, who has demanded dialogue with the central Executive, have participated in the protest; the president of the Region of Murcia, Fernando López Miras, who has called for a new Hydrographic Plan for the Tagus with "technical" criteria and the delegate of the Junta de Andalucía in Almería, Aranzazu Martín, who considers that more is being done with questions "ideological" than with "scientific."

Mollà has recognized the work of farmers and irrigators in the face of a "fair claim" like this and has emphasized that the Consell del Botànic has the "technical guarantee" and "the reason" to ask the Government to "reconsider" its position.

“We know that there must be ecological flows, we are not like other governments that have been irresponsible and that have ended with sentences for not being able to be brave. We want ecological flows and we know that we are right, together with the irrigators, to ask for those 6 m3 per second that would make the Tagus guaranteed", Mollà explained in attention to the media.

In his opinion, "there is still room for negotiation" for which he has demanded that the Government "understand that two years ago these farmers and these irrigators supplied the mouths of all houses and families in a global pandemic." In addition to the Minister of Agriculture, on behalf of Compromís, the deputy trustee in the Valencian Courts, Aitana Mas; the mayors of Crevillent, José Manuel Penalva; that of Daya Vieja, José Vicente Fernández or the spokesman at the Alicante City Council, Natxo Bellido.

The new minister of Innovation and Universities and former socialist senator, Josefina Bueno, has reiterated that the transfer "is inalienable" and "there is no alternative". «We will defend it as it should, with politics and trying to reach agreements. Our decision will go to the last consequences », she has settled. Along the same lines, the president of the PSPV and next trustee in the regional parliament, Ana Barceló, has shown her commitment to dialogue, has called for "a common front" to defend the Tagus-Segura, a claim that they will take to the regional chamber «to unanimously support the province of Alicante and its irrigators».

"We demand that the Government reconsider its position and maintain the current conditions of the transfer." In addition, he has reiterated that "we will defend this issue tooth and nail, which is vital for the southern regions of Alicante, especially those of Vega Baja, l'Alacantí and Vinalopó."

For his part, Carlos Mazón has advocated for "an agreement, based on firm dialogue between the Government of Spain and the autonomous communities to solve the water problem," he told the media. "We join seamlessly and as a single party to the irrigators and farmers and to the needs of the province of Alicante and the region of Murcia and Almería," he said.

Mazón has stressed that it is not “a concentration against anyone. It is not against our irrigation brothers and farmers from Castilla-La Mancha, we also defend them from deception, demagoguery and the division between Spaniards that the socialist government of Sánchez is promoting.

«In Spain there is water for everyone and we don't have to depend on it to rain so that we can all irrigate our fields. Solidarity is for everyone and always goes in two directions », he defended. In this sense, he has demanded the convening of a negotiation table “because this water war that the PSOE is generating has to be fixed. It cannot be solved with lies, demagoguery or electoral calculations. I ask for dialogue based on solidarity between all the regions of Spain because water belongs to everyone.

Lastly, he urged Puig to be "courageous and come here to defend the water that his land deserves and, if necessary, confront his own party, President Sánchez, make him see reason, because it is not enough with declarations and half measures”.

For his part, the president of the Region of Murcia, Fernando López Miras, has urged the central government to annul the Tagus Hydrological Plan and to prepare a new one based on "technical criteria" because "we are talking about the future of Levante" and the transfer al Segura is a “viable” infrastructure.

«We were in Madrid, we were in Murcia and we are also in Alicante. We are always going to be with the farmers, with the irrigators and with the Spanish Levante because today we are playing a lot, a lot”, said the Murcian leader.

For his part, Aranzazu Martín has expressed his support «for Almeria's agriculture. We not only support the Spanish southeast but also our Levante Almeria, where we are risking the water of more than 130,000 citizens and more than 20,000 hectares of crop irrigation", he assured and affirmed that the decisions that the Ministry is adopting in relation to Tajo-Segura transfer «are based more on ideological questions than on scientific questions».

From Ciudadanoss, the trustee Ruth Merino has criticized that "«PP and PSOE have brought us here, they have governed for decades and have never done anything to solve the problem of the transfer, which has been dragging on for too long and, at the moment of truth , they have left the primary sector of the province stranded". Merino has asked for "high-mindedness to address a very serious problem" and has insisted on launching a national water pact with the consensus of all the agents involved, political parties and autonomous communities to guarantee the supply of water resources to all territories.

After the success of 17M, ASAJA Alicante and the rest of the convening entities are already working on new mobilizations and actions to guarantee that Levante continues to receive water to continue contributing more than 3,000 million to the national GDP each year and feed tens of thousands of families.

1 In 15 days, 995 migrants have arrived in the Canary... 2 COVID-19: 14 additional deaths and hospitalizations... 3 DIRECT. Giro 2022: the 10th stage for Biniam Girmay!... 4 UFOs: "more than 400" phenomena identified,... 5 Ceferin boasts that Real Madrid is in the Champions... 6 A fifth Selke trophy for Patrice Bergeron? 7 Alert of fire risk in Seat León and Tarraco in Spain 8 David Pastrnak's season continues 9 The US Congress analyzes UFO sightings for the first... 10 Allianz pays 5,700 million to settle an investigation... 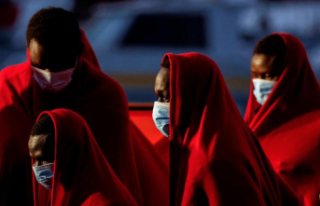