Night of demonstrations and complaints in Mestalla (the third in a year), with more fans in the vicinity of the stadium than in the stands to cheer on a team that had nothing at stake against Celta and that has gone three consecutive seasons without being in Europe, something that had not happened since the eighties. 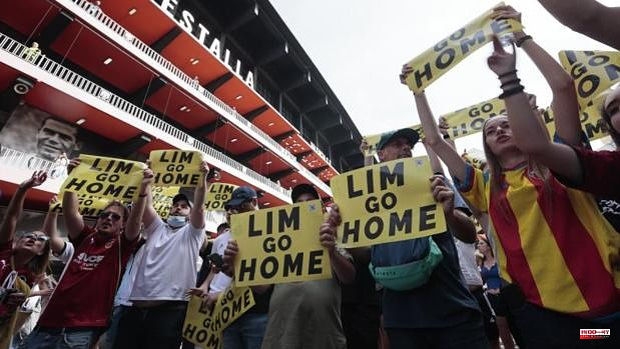 Night of demonstrations and complaints in Mestalla (the third in a year), with more fans in the vicinity of the stadium than in the stands to cheer on a team that had nothing at stake against Celta and that has gone three consecutive seasons without being in Europe, something that had not happened since the eighties. The management of Peter Lim, the majority shareholder of the club, has unnerved the Valencian fans, who are requesting the departure of the Singaporean businessman. Several Valencian platforms, associations and groups held a demonstration at the gates of the stadium to protest against Peter Lim, fed up with the sports drift that the team is going through and amplified by the unveiled audios of Anil Murthy, in which the president reveals the poor Lim's intentions in the sports project and also in the new stadium.

According to this information, Lim is not interested in finishing the new field and maintains a strategy of good intentions with the institutions of the Generalitat to try to subsequently prosecute the construction project due to the possible loss of urban benefit.

The match against Celta began with just 2,000 fans in the stands while the rest continued to protest outside. The Valencianist groups distributed whistles that did not stop blowing and banners asking Lim to return to his house ('Lim go home'). The few fans who decided to go in to cheer on their team were more interested in criticizing the box than in the evolution of their players. “Valencia is in the hands of those who have repeatedly shown absolute disregard for its history, its fans and its future. Fighting for the survival of our club is not an option, it is a duty," he explained in a statement. «Let's not let them silence us, let's not let them destroy 100 years of history with total impunity, let's not let them rob Valencianism of its dignity. The most important game of Valencianism is played by the fans. Come and make yourself heard », he added.

The first half hour had not been played when Valencia went ahead on the scoreboard after a move created by two of the players that Lim intends to part with this summer: Soler and Gayá. Precise movement in depth of the midfielder towards the side, who won the bottom line to place it at the far post, where Marcos André was. The bad finish of the attacker became an unexpected assist for Maxi Gómez who finished off with his chest. Goal with the shield, a poetic metaphor in such convulsive moments. The goal served to momentarily lift Valencia to eighth position in the League, which is of no use to them at all. «Soler and Gayá are two very important players, heritage of Valencia. I decide as far as I can, I can give my opinion but I can't contemplate the needs of the club and the goals of the players. They are two magnificent players and losing them would weaken us, but if they finally leave and players reach their level, I would understand. If not, we would be weakening the team," Bordalás warned this past Friday.

1 Ortuzar calls for the creation of a "peripheral... 2 Spain relaxes entry rules for unvaccinated tourists... 3 Fernando Simón, on monkeypox: "Transmission... 4 The habitat of the Iberian lynx in 'El Borril'... 5 Champinter, Virgen de las Viñas, El Progreso and... 6 The detachment of the catenary on a train interrupts... 7 The first prize of the National Lottery leaves 60,000... 8 They encourage educational centers in Castilla-La... 9 Horse racing: “Hermès Baie is a crack”, declares... 10 Gracia Querejeta and Natalia Verbeke, 'Arcipriests... 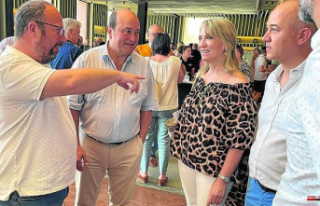 Ortuzar calls for the creation of a "peripheral...