The monkeypox spreading across Europe does not distinguish gender or age. 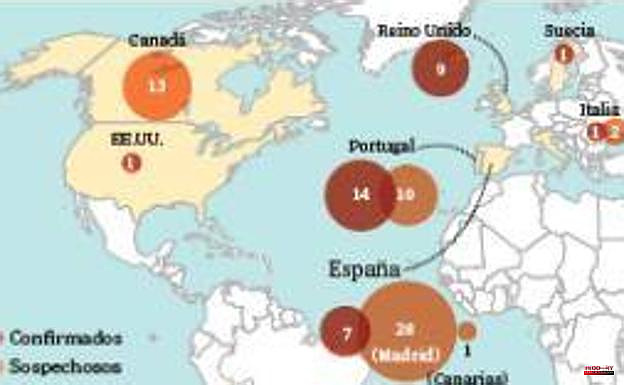 At this time there are already seven positive cases and 28 under study, but the number of confirmed cases is expected to increase. All those infected are investigated in Madrid and only one in Gran Canaria.

The profile of those affected is adult males with an average age of 35 who engaged in risky sexual practices and, "in some groups they participated in 'chemsex' sessions and private parties," confirmed yesterday to ABC, Elena Andradas, director of Public Health of the Ministry of Health of Madrid.

The disease is not a sexually transmitted infection. It is not necessary to have sexual intercourse to contract it; it is enough to maintain intimate and prolonged contact by contacting mucous membranes and sharing body fluids. This can happen during sexual contact, but also by sharing towels or sheets used by someone infected, for example.

The Community of Madrid has not yet found its patient zero, the infected one who brought monkeypox. "It's still too early to tell," confesses Andradas. Yes, two foci or two chains of transmission behind the first cases have been very well identified. Some have a history of travel to Lisbon, where there is also an active outbreak, and it has also been known that there was a British citizen at one of those private parties. This information is important to trace the chain of contagion because it is in the United Kingdom that the outbreak that now spreads across seven countries was born.

All Spanish patients are in good condition and are progressing well. They remain isolated in their homes and monitored by the Community of Madrid. Public Health technicians control their medical evolution by telephone and compliance with their isolation, which does not require measures as strict as in Covid. “They are not required to wear a mask and they are asked not to share towels or other utensils with the rest of the cohabitants,” explains Andradas. They must remain isolated for at least two weeks, the time it takes for the pustules or blisters left by smallpox to heal. When they dry up and fall off, they are no longer contagious.

The pattern is similar to that seen in the UK, where the outbreak has also affected men who have sex with men. There the authorities investigate the spread of monkeypox through sexual networks.

"We particularly urge gay and bisexual men to be aware of any unusual rashes or lesions anywhere on the body, especially the genitals." This is the warning issued by the United Kingdom Health Security Agency (Ukhsa) after the confirmation of nine cases of monkeypox in the country. Most are gay, a pattern of transmission "highly suggestive of spread in sexual networks." Dr. Mateo Prochazka, who leads the agency's team investigating the outbreak, described this route of transmission as "novel."

British health authorities are concerned about a possible community transmission, since, as reported in a statement, "the last two cases detected have no relation to travel to nations where the disease is endemic", although they also have no known connections with the others. confirmed cases. The first case was confirmed on May 6 in an individual who had recently traveled to Nigeria.

From the agency they asked those possibly affected "to contact a sexual health service", in charge of giving guidance on sexually transmitted infections and contraceptive methods, in case they are concerned about a rash or other symptoms of the ailment, such as fever , headache, muscle aches, back pain, swollen lymph nodes, chills, or extreme tiredness.

From the agency they explained that although monkeypox "has not been previously described as a sexually transmitted infection, it can be transmitted by direct contact during sexual intercourse" and "it can also be transmitted through close contact with a person who has monkeypox” or objects used by a person with the disease.

In any case, they appealed for calm saying that "the virus does not usually spread easily between people" and that at this time "the risk to the population of the United Kingdom remains low".

Susan Hopkins, chief medical adviser to the UK Health Security Agency, recalled that cases have been identified quickly. "We continue to investigate the source of these infections and raise awareness among health professionals" so that they are vigilant for symptoms, especially in this sector of the population. "The evidence suggests," Hopkins said, "that there may be community transmission of monkeypox virus, spread by close contact."

Monkeypox, according to specialists, is genetically related to smallpox, so the contacts of those affected are receiving a vaccine that was approved in 2013 to prevent this disease. Some experts, such as Dr. Simon Clarke, a microbiologist at the University of Reading, suspect that the number of cases in the country can already number in the "tens".

The regional director of public health for London, Kevin Fenton, confirmed to the BBC that the situation is being monitored "closely" and that the country already has a plan to stock up on vaccines in the face of the possibility that the current outbreak is just the tip. the iceberg of a much larger problem. The UK has secured thousands of doses of vaccines to protect health workers and people who may have been exposed.

1 The President of Ukraine thanks the United States... 2 Czech Republic extends state of emergency due to "unprecedented... 3 Clashes between Orthodox Jews and the Police on Mount... 4 Oklahoma approves a bill that prohibits abortion from... 5 Harris warns that reversing 'Roe versus Wade'... 6 The Argentine Justice declares the State guilty of... 7 The Colombian Foreign Minister visits Paraguay in... 8 38 NGOs, including HRW and AI, ask Algeria to end... 9 The United States says that the weather has affected... 10 Japan will send 1.9 million euros to help the IAEA... 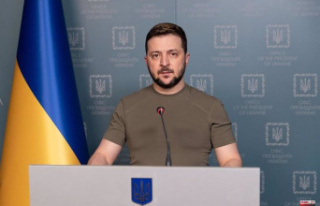 The President of Ukraine thanks the United States...