Not even in the most intricate of the scripts that he has had to interpret, the actor Luis Lorenzo (Madrid, 1960) would have been involved in such a gruesome plot and that, presumably, is hatched by himself and his partner, Arantxa Palomino. 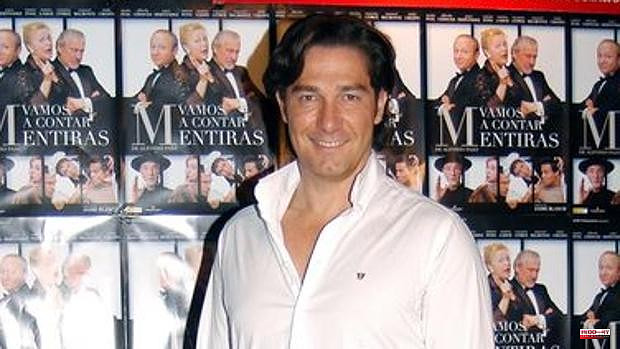 Not even in the most intricate of the scripts that he has had to interpret, the actor Luis Lorenzo (Madrid, 1960) would have been involved in such a gruesome plot and that, presumably, is hatched by himself and his partner, Arantxa Palomino. They are accused of poisoning her elderly aunt to death in order to seize her inheritance. Yesterday, after spending two days in the cells of Tres Cantos, they appeared before the judge of First Instance and Instruction number 9 of Arganda del Rey, where he refused to testify; his girlfriend did, and quite extensively (the hearing lasted about two hours), according to sources in the case, to deny the accusations. The Civil Guard considers them co-authors of the homicide to the same degree.

The Prosecutor's Office did not request provisional prison for them; only the appearance in court weekly and the withdrawal of the passport, so that they do not leave the country. They are still under investigation.

From a secondary actor and heartthrob, to the protagonist of the ugliest of his characters, Lorenzo was arrested with Arantxa at his home in Rivas Vaciamadrid on Wednesday by the Homicide agents of the Madrid Civil Guard Command, according to 'El Confidencial'. The same apartment where María Isabel Suárez Salgado, 85, died on June 28, 2021, eleven months ago now; and of whose death they are accused. By poisoning. Investigators maintain that from March 2021 to June, the date of her death, the couple subjected the old woman to mistreatment and neglect and also allegedly supplied her with manganese and cadmium, two heavy and poisonous metals found in the body of the victim.

Luis Lorenzo has a history of cross complaints with his former wife. Very conflictive, the actor, according to sources in the case, between November and December 2020 was denounced by his ex, with whom he has a 9-year-old boy (and for whose custody they litigate), for ill-treatment; "But more complaints, many, are the ones he put on her," our sources specify. He had already had a dispute with another ex-girlfriend, a pharmaceutical businesswoman, over an economic matter.

Since 2014, things were going badly for Lorenzo. Almost out of work, he and his partner welcomed María Isabel, a resident of Grado (Asturias), in Rivas for seasons. Every time he returned to Madrid he worsened what seemed like senile dementia. María Isabel went from being an independent person in her Asturian house to returning from the ranches with her niece, completely different from her.

The last time he left his home was in March 2021. He has already returned in a coffin. Shortly after, one of her brothers José María, a resident of Avilés, went to the Civil Guard and reported that he could not communicate with his sister and that she was missing. The agents alerted their colleagues in Madrid and a couple showed up at Rivas's apartment. The actor, with his best smile, assured them that the aunt was fine but that they could not enter without a court order. Sources of the case believe that after that episode Lorenzo and his partner began to get rid of all the toxic products that they would have supposedly used for the poisoning. In June, a doctor from the health center certified the death of natural causes of the ancina. Her body was moved to Grado for burial, but her brother, who had not given up trying to find out what was happening, requested an autopsy when her body was still in the funeral home. The results proved him right: traces of cadmium and manganese, not present in vital organs or in her hair, according to the report, which implies that the victim was poisoned on dates close to her death. "There was a conduct of abuse and neglect maintained in those months that culminated in her death." Violent/homicidal etiology, forensic experts point out; no natural causes.

Two months ago, the Grado court was inhibited in the Arganda court and the Homicide Group of the Madrid Command entered. They detect two facts: that Isabel had about 60,000 euros at her disposal, of which about 30,000 had been taken, a spending pattern that she did not marry with her life. And that she has made a will in favor of her niece, the actor's partner, weeks before she died: a two-bedroom apartment in Grado and some undeveloped land. The neighbors, questioned, confirm that they spent days listening to screams and insults. In detention, Lorenzo exhibits his facet as an actor: total calm. His partner, with a histrionic personality, as he showed, goes through ups and downs during the hours in the dungeon. She is separated and is the mother of another child.

The arrest warrant is accompanied by another to search the house. Many medicines are intervened (he was, above all, the one in charge of buying them with Isabel's health card, and he administered them to her), computers and telephones in which the investigators hope to find traces of how the crime was conceived. In addition, several bottles of unlabeled products were taken from the bathroom, which have been sent to Criminalistics. They are, in principle, for cleaning houses after works, solvent type. Cadmium and manganese can be in fungicides, dyes, and batteries, for example. Everything points to the fact that these boats without a trace hold keys to the hell that the old woman lived during the last weeks of her life.

1 The Fourteenth against the Seventh 2 Real Madrid and Liverpool line-up today in the 2022... 3 Latin gangs: one of the Trinitarians of the last aggression... 4 Brandon Sanderson, the writer who raised 8 million... 5 Paris and the madridista obsession 6 End surreptitious influencer advertising and fake... 7 Alpes de Haute Provence. Montclar: This weekend, Montclar... 8 ARDECHE. Ardeche: The regulation of assistance to... 9 Bourg-les-Valence. Drome: A coniferous hedge that... 10 Holy Cross. Two teenagers are killed in canoe-kayak...

The Fourteenth against the Seventh