The Ecuadorians followed this Thursday minute by minute, the trickle of information that leaked about the rapprochement between the Government and the leadership of the Conaie (Confederation of Indigenous Nationalities of Ecuador) to achieve the initiation of a formal dialogue, accepted by the Executive and conditioned by the protesters, with the aim of putting an end to the paralysis of the country, which has left, to date, two deaths, 170 detainees and millionaire economic losses. 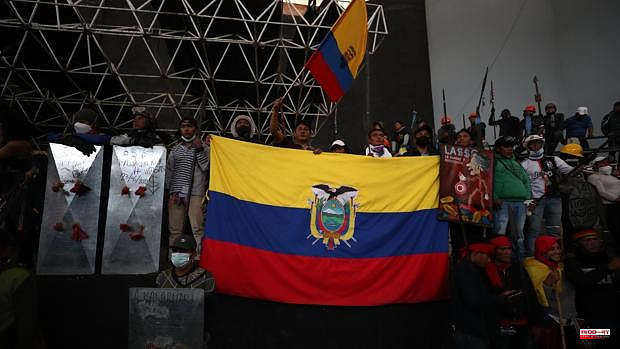 The Ecuadorians followed this Thursday minute by minute, the trickle of information that leaked about the rapprochement between the Government and the leadership of the Conaie (Confederation of Indigenous Nationalities of Ecuador) to achieve the initiation of a formal dialogue, accepted by the Executive and conditioned by the protesters, with the aim of putting an end to the paralysis of the country, which has left, to date, two deaths, 170 detainees and millionaire economic losses.

This Thursday, on the eleventh day of the mobilizations, the Catholic Church maintained contacts with the leaders of the mobilization and the Government used intermediaries, according to what ABC learned, to persuade them to sit down for dialogue. The Conaie demanded that they be allowed to use the facilities of the House of Culture, which remained surrounded by the Police, and the Government agreed.

Almost immediately, rivers of people entered the Agora; the indigenous people spoke of "recovering" the space. The gesture would have been well received, so, at the close of this edition, everything suggested that there would be a green light to start the dialogue. The decision of the authorities was recognized by observers as a skillful movement of tokens, at a time when the indigenous people would have realized that the country has begun to mobilize to reject the strikes, which had obvious destabilizing purposes, against the Government. center-right Guillermo Lasso. In full discursive effervescence, at least a couple of indigenous leaders affirmed, in broad daylight, that "Lasso must be removed," while the chorus of all the demonstrations has been: "Get out, Lasso, get out."

But nothing is said until there is a formal agreement; yes, for the leaders of the protests, the situation was getting complicated. The fact that some mobilizations turned violent and that the strike could get out of hand would have contributed to opting for dialogue, since they could not justify, as on past occasions, that the vandalism during the protests was caused by infiltrators. What happened Tuesday night in the Amazonian city of Puyo, where a bank branch and more than a dozen police cars were set on fire, and where a protester was killed, were equally decisive.

To this is added the forceful action of some 300 community members who, on Wednesday, entered the Tisaleo electricity substation (province of Tungurahua) with the intention of pressuring to disconnect the service, which would have meant leaving Guayaquil without electricity; but they didn't get it. Earlier, in Quito, a group of protesters broke into the Prosecutor's Office, from which they took files and documents, which were incinerated. "What they are looking for is not there," said the attorney general, Diana Salazar, after condemning the act, in relation to the proceedings on acts of corruption and organized crime that she is processing.

To date, there is no exact figure for the losses due to the days of unemployment, but it will be substantial. Oil production has lost some 170,000 barrels and exports of bananas and shrimp have not been made either. As if that were not enough, the internal supply lines are cut and the markets and supermarkets are beginning to empty. In several cities, the population has organized itself and has taken to the streets to protest the blockade – they are called ‘peace marches’. The one that took place in Quito, on Los Shyris avenue, was massive. If President Lasso comes out well, it is evident that he has to give his government a change of direction, there is a disconnection with the needs of the poorest sectors and that is a permanent fuse that can be lit at any time.

1 EU countries confirm Ukraine the status of a candidate... 2 The brands denounced for reduflation deny the accusations... 3 Algeria demands 80 million from Técnicas Reunidas... 4 Congress postpones the fund that will make gas and... 5 SEPI refuses to rescue Ezentis, while Abengoa hangs... 6 A Spaniard, among the ten best young economists, will... 7 De Cos asks the Government that the fiscal measures... 8 Room Mate, Kike Sarasola's hotel chain, files... 9 Competition detects only about 100 "anomalous... 10 Fixed-rate mortgages set a new record due to the rise... 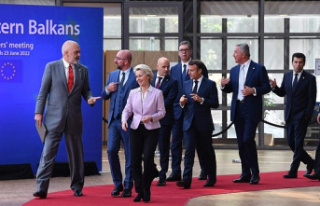 EU countries confirm Ukraine the status of a candidate...