It wasn't exactly hot, it was a friendly embarrassment that accompanied the first bars of that slope created as for Alejandro Valverde, which is the Paseo de la Ermita. 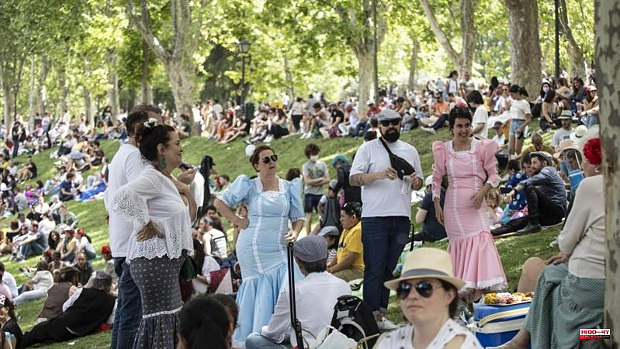 It wasn't exactly hot, it was a friendly embarrassment that accompanied the first bars of that slope created as for Alejandro Valverde, which is the Paseo de la Ermita. To get to the Pradera you had to climb the hill like a path, perhaps, of perfection; a penance to be miraculed later with the holy waters of the Saint. After last year's institutional act, this Sunday, the big day, Madrid turned to its Pradera de San Isidro.

The unevenness of the aforementioned street was not quantified, but the Municipal Police horses reared in view of the gravity and the distance, and there were giggles, those of an anonymous person who cut bread for sandwiches and confessed with a laconic "let's see » how the day was going to end, the big day.

All in the back of a 'van' where alleged cold cuts could be guessed.

The flat and storied towers of Madrid as always, despite the diffuse sun, shone while the healthy people of Madrid kept more than an "hour and a half" in line with parpusa and without parpusa, with carnation and without carnation, like Rosario, for water or the Hermitage. “You don't know, son, how good it is to be here after everything we've been through. And I have come for many who are no longer here." And he was right, because saving last year's 'isidril' offering, the last San Isidro en la Pradera had its Zapatistas as a contest of politicians and politicians, of the Assembly and the town hall, customized, winning the favor of the people despite the heat. And even an escrache was seen.

Those were other times, because although this Sunday Yolanda Díaz, who seems to be going from fair to fair through the lands of Spain, was shouted in one voice about "Communists out of Madrid", the political class was not the protagonist. The number of children, almost babies, who may not remember the pandemic and who, like Virginia, was carried on a piggyback ride with a carnation that made her from Madrid for its florals, was the protagonist. The chulapos from Madrid, the associates in Hortaleza, had already 'come closer' to the morning, and went down to "for another water" to the bars, calm, which are the outskirts of the Pradera. And they deserve it, that's why they teach chotis classes all year round at the Merced Center.

More than the chulapo 'kit', a backpack/fridge, of a well-known and country brand, is becoming fashionable, which Fernando opened with his beret that he wanted to be a parpusa and that would surely come from China: like everything. He carried it, the backpack/fridge, at full throttle, and that little placemat that is so Goyesque almost didn't fit even though the years go by.

In front of the Hermitage, a barrel organ (it was actually a tuned loudspeaker) played pasodobles that, together with the bells that called mass at once, gave a noise like Palm Sunday with mojitos —7.50 euros— instead of clapping. Also in front of the Hermitage, the members of the chotis @chotiscarmenydavid, whoever Carmen and David are, had left their belongings under a brief grove that provided shade and made it possible to see in the distance which politician was throwing a canutazo on a holiday, which is already a win. Above, the crowds of the mass, and below two television technicians were marking a dance for Agustín Lara, that Mexican who sang to Madrid without stepping on it.

The professionals worked waiting for Almeida to arrive, greeter, grabbing children with mastery of the trade and photographing themselves with voters, with opponents who asked him to "expand the blue zone" and even with neighbors like Viri, who, oblivious to acronyms, defended his selfie. consistorial with the chauvinism of having "'pictured' with the mayor of the capital of Spain, baby."

The mayor arrived late to the sarao, and before that an old woman, with the consequences of having returned from the other world and living from day to day, bawled about the "Manila shawl" in a not too bad tone. Quite a metaphor for Madrid, that she recovered her smile although she is losing the chulapo suit and the parpusa for the shorts and a carnation with which the young people who meet believe.

So much time wearing masks has disrupted the sense of smell, but Ávila meats looked glossy in the picnic areas, and the ones who spent the most and the least spent their good day in Pradera. The same thing a three-year-old child Yolanda Díaz: what is said a popular party.

1 Ford Kuga PHEV: 225 CV with the minimum consumption 2 The knee that stings in Burgos: «I was looking for... 3 Donald Trump: a possible 2nd term? 4 Daily horoscope May 16, 2022 5 Waffle mixes put to the test 6 David Milgaard dies aged 69 7 A Gatineau resident drowns in an Ottawa river 8 Paper industry: an agreement in principle for the... 9 QMJHL playoffs: Anctil and Parent give the Phoenix... 10 The new PP, a 'triumvirate' based on respect... 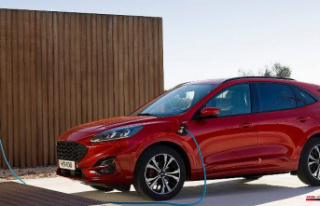