The arrival of the North American president, Joe Biden, at the Torrejón de Ardoz air base in Madrid, marks the informal opening ceremony of the NATO Summit that is being held in the capital from today until next Thursday. 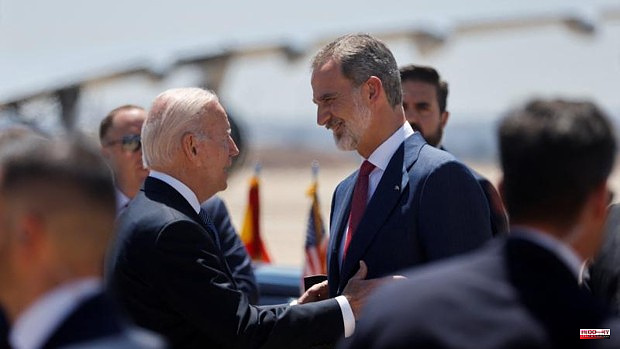 The arrival of the North American president, Joe Biden, at the Torrejón de Ardoz air base in Madrid, marks the informal opening ceremony of the NATO Summit that is being held in the capital from today until next Thursday. The president landed at 3:05 p.m. aboard Air Force One from Germany, where he has participated in the G-7 leaders' meeting. The first lady, Jill Biden, arrived in the Spanish capital on Sunday and yesterday she shared an agenda with Queen Letizia: after a meeting in Zarzuela, they visited the headquarters of the Spanish Association Against Cancer.

Biden was received by King Felipe VI. He greeted the ministers of the Government of Spain present at the aerodrome (the Ministers of Defense and Foreign Affairs, Margarita Robles and José Manuel Albares) and the United States ambassador, Julissa Reinoso.

After the formal greetings, the US president traveled in the armored limousine known as 'The Beast' to Madrid. On his first trip to Spain since becoming president, Biden is traveling with a veritable entourage not only of ministers, advisers and assistants (about twenty have accompanied him from Munich, where the G-7 summit took place), but also of Secret Service agents. There are usually more than 400 police officers who travel with the president. Antony Blinken, US Secretary of State, and Lloyd Austin, Secretary of Defense, arrive on another flight.

His agenda for the day includes a meeting with Pedro Sánchez in La Moncloa at 4:30 p.m. and, an hour later, with the King at the Royal Palace. In the bilateral meeting of both presidents, the central issue, according to the White House, is expected to be joint support for Ukraine and to find ways to penalize Russia for its aggression. Later, he will participate with the rest of the Heads of State and Government in the official reception of the King and Queen in the Throne Room of the Royal Palace, in the group photograph in the Hall of Alabarderos and in the dinner offered by the Monarchs in the dining room. gala.

1 How can Russia's suspension of payments affect... 2 Sakhalin, the strategic and energy 'paradise'... 3 Follow live the Cerundolo - Nadal 4 Shock in Formula 1 after Nelson Piquet calls Hamilton... 5 Arrested for throwing two glass glasses and threatening... 6 Mazón, on the Oltra case: "There is no consistency... 7 Requena presents his candidacy to enter the Regulatory... 8 The Prosecutor's Office investigates the deaths... 9 The Spanish Prosecutor's Office opens an investigation... 10 Two female lynxes, mother and daughter, raise their... 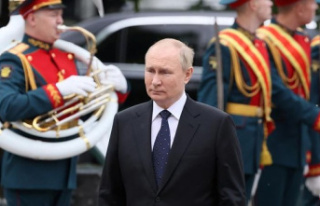 How can Russia's suspension of payments affect...