Itziar Yagüe: «My first album has saved me from the madness of that bloody and absurd year 2020»

The power, the tessitura, the timbre and the tuning of Itziar Yagüe's voice perplexes lovers of the tastiest and most vintage blues-jazz. 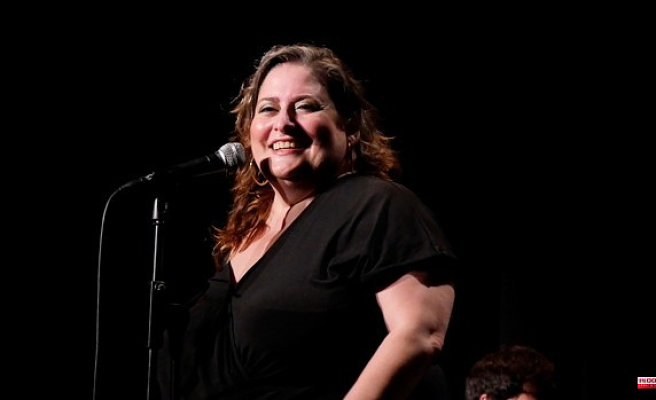 The power, the tessitura, the timbre and the tuning of Itziar Yagüe's voice perplexes lovers of the tastiest and most vintage blues-jazz. There is no one who captures these genres in this way in Madrid. She already sang as a child, but it has been now that she has become one of those rare cases of a revelation artist in her forties. And it is that her cover letter, the fabulous EP 'Delicious' has been a success that continues to grow every time she goes on stage. This Friday he will do it in the Tempo room (Duque de Osuna 8, tickets here), where he will premiere some of the songs from his next work, still without a name, which will once again be made up entirely of original songs, and whose production Texan bluesman Greg Izor is in charge.

You just reissued 'Delicious', did you imagine having to release a second edition when you released the first?

When I received the first edition of 'Delicious' in my tiny house it gave me dizziness and vertigo because I didn't have a single gig in the making and I didn't know how I was going to manage to sell all those records packed in seven boxes, since I absolutely didn't know no one in the industry. I mean, I can't believe I sold the first print run, so you can imagine I never thought I'd order a second one... Life surprises you, sometimes even for the better.

What other beautiful things have come thanks to this album? I think there are performances that have been very special, some award...

'Delicious' is my first album and I owe it to him for being interviewed on ABC or on Radio Nacional de España, or for having picked up the award for best singer 2021 from the prestigious magazine Enlace Funk. The media treat me very well and I am immensely grateful to you for that. But the people… that people write to you on the networks or approach you when you get off the stage and ask you to sign their copy… that is also impressive, it gives me an incomparable feeling of gratitude. Perhaps the most exciting thing that 'Delicious' has brought me was opening the Arrasate Blues festival in 2021, which is held in the town where I lived until I was 13 years old and where I started in music and singing. He hadn't been back in 34 years. Getting up on that stage is the most emotional experience I've had singing. This year we return, of course. Personally, 'Delicious' has saved me from the madness, nonsense and bewilderment in which that damned absurd year 2020 plunged me. I had to get that album out against all odds, with everything against me but with the conviction that the album deserved it. It was both the worst and the best moment of my life, I don't know if this is understood but that's how I felt.

How will your concert at Tempo be? What surprises aside from the album's repertoire can we expect?

We are going to Tempo loaded with news, several songs that we premiered for the occasion, signed by Greg Izor, who has written them for me and that will be on the next album. The band is very good, with the locomotive Dani Domínguez as drummer, a true out of series; Giulio, the most passionate pianist and showman I know, and Raúl on double bass, who to me is class and elegance itself in playing. We will offer a very varied show, you will be able to dance and you will be able to feel and sing and get emotional... and we will be able to see your faces without masks, finally. I sincerely believe it will be memorable.

- Bessie Smith is one of your biggest inspirations, do you remember the moment you heard it for the first time? What makes her so special in her opinion?

I remember that his way of singing impressed me a lot, because I hadn't heard anything like it. To be able to transmit so many things just with the voice... to be so intense and dramatic and vulnerable and at the same time so powerful and so in control of her speech and her history... that is not within the reach of any singer, neither then nor now, where all the voices, as good as they are, sound the same, plastic and artificial, disneyfied and empty. Not to mention that technically he was also a prodigy, but in my opinion that's the least of it. Bessie is real and I think that's enough reason to adore her.

It seems that in soul yes, women have transcended enough to «stardom» and the category of «icon», and it could be said that the same thing happens in jazz. But in the blues, it seems that it is more difficult to appreciate the great singers and their work, do you agree? Why do you think this may have happened? The blues and the history of women in society have many parallels in terms of overcoming suffering, discrimination...

Beyond Big Mama Thornton, women disappeared from the front line of blues. Lavern Baker or Ruth Brown remained, whose style was more r

What singers from outside of jazz-blues-soul do you admire? Surely you have some surprising guilty pleasure out there...

I love Lila Downs, to give you an example, I find in her a lot of feeling and personality, I adore her. I love the Brazilian Cartola, I listen to him without limits, with being able to write at least one song that was half as beautiful as his are, for me my life would have been worth it. I like Cuban women, Celia, La Lupe… As you can see, I always go for classic styles and very intense women, hehehe. And as an exception that proves the rule, I'll tell you that I'm crazy about drummer and singer Josh Dion, from the experimental rock band Paris Monster. That guy packs so much talent into one human being that he looks like an alien. Having grown up in the 80s, discopop music from the 70s – 80s has remained a guilty pleasure for me (although if you admit it, it's not so guilty). The first cassette I bought myself at a flea market was one by Ricchi e Poveri in 1983 There it is.

I know that as a child you liked to sing a lot, but when did you start doing it 'seriously', as they say? And why not before?

Between the ages of 20 and 34 I didn't sing seriously. I sang without even dreaming of making it a hobby. But there was a moment in my life when I realized that I needed to do it. I needed to express myself artistically, my mind and my body and my soul were screaming at me, so I started singing where they left me, in different amateur formations, some better than others, where by the way I have made some great friends that I have the honor to conserve That time I was looking for my own style and learning to be on stage, which was something that terrified me. Always believing that I didn't deserve it, that I had to earn it, that it was there by chance and on loan. I have worked hard to convince myself that I deserved to sing and make my own music. That has been the biggest obstacle I have had to overcome to be an artist: my own prejudices.

Are you working on new material? Have you continued composing your own songs? What vibe will the next thing I post take?

I have only one song left to finish putting together the album and we entered the studio in October. My next work will contain only my own songs, like the previous one, some by Greg Izor and others by me. The wave… we didn't want to go too far from 'Delicious', but there will be more complex songs, with rhythmic sounds.

- Blues in Madrid, has it had better times in the 90s, 00s and 10s? Obviously this beginning of the decade has been weighed down by the pandemic, but I don't know, how is the scene breathing right now?

Yes, without a doubt, but the whole of Madrid has lived through better times for culture in every way. As for the blues, in Madrid there is a very faithful hobby that has managed to make the scene overcome even pandemics, despite the terrible administration of the financial resources dedicated to culture in this city. There you have Tonky, for example, or Emilio Arsuaga himself, who has spent half his life in this. The Madrid scene is trying to get ahead, the Moratalaz Blues Factory does not give up its efforts, and the Madrid Blues Society also holds up the bastion with dignity. The blues has to do with survival, with the human being's struggle against injustice and adversity, that's why it always resists.

A summer tour that begins on June 30 and ends in mid-August, I'm going with a new formation as a sextet with wind instruments; a new piano and voice duet project that I will premiere in Vitoria this summer; the filming of the songs that will make up the album and its corresponding recording in October. And if all goes well, the publication of that work at Christmas. It's not little, right? But there is no one to stop me now. I have promised myself.

1 General anger against Vox: he asks in Madrid to eliminate... 2 Russia threatens Finland and the West with a nuclear... 3 Rocket: a white tide invades Place Bell 4 The Mets set the record straight 5 Maduro puts up for sale the companies that Chávez... 6 Green light to the credit with which Iberia will take... 7 Brussels asks that legal obstacles to renewables be... 8 C.R.A.Z.Y. will be released in the United States 9 Jeanick Fournier in the final of "Canada's... 10 Feijóo persists in reaching out to the Government... 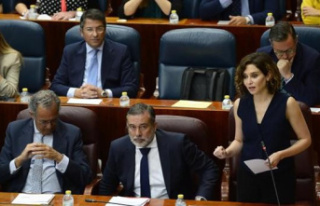 General anger against Vox: he asks in Madrid to eliminate...